v Faces in KS: Taylor Martin - Sports in Kansas 
Warning: include(../includes/bodytag.php): failed to open stream: No such file or directory in /home/kansass/public_html/ks/news/index.php on line 36

Taylor Martin is looking to be one of the best lineman in Kansas. 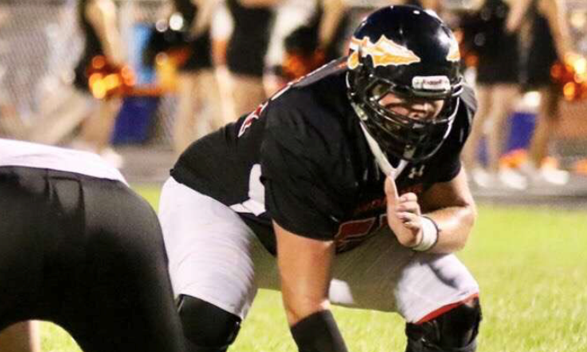 Taylor Martin, senior at Larned High School, is one of the most under the radar football players in the state of Kansas as he enters his last season of high school football

Martin, who stands 6-foot-5 weighs pounds on the offensive and defensive line, enters just his second year as a starter in football but has a lot of potential based on size and strength alone. He benches 385, squats 600 and has a clean of 300 pounds. He also has a 5.2-5.3 range in the 40-yard dash. He has landed offers from Missouri Western Southwest Oklahoma State and Dordt. He will project likely at either tackle or guard in college.

Martin would like to land a Division I scholarship this season and has proved himself at several combines this summer. The problem like most 2021 seniors is not getting to be in-person at camps this summer, which ultimately could’ve let to an FCS or FBS offer in person. Martin, who we’ve seen at two events this summer, certainly passes the eye test to play at multiple levels if given the opportunity.

He also gets it done with classwork with a 3.4 GPA and loves history. He describes himself as a quiet student that gets the job done.

Larned, who finished 4-5 last season. returns six starters on offense and five on defense for head coach Tad Remy. In addition to Martin, we expect big years from Dillan Smith at quarterback, Jace Snyder at running back and Andreus Tucker at wide receiver.

This feature is presented by the Larned Booster Club.

Nex-Tech Wireless is a proud supporter of Sports in Kansas

Chet Kuplen, CEO/Founder of Sports in Kansas, on Martin

“He’s bigger than a lot of the kids I’ve seen get offers the last several seasons and a lot stronger than your average high school lineman. That doesn’t always guarantee a big-time offer though as there are multiple things to being a successful lineman. I think there’s some footwork stuff he’s really trying to get done and prove, how he bends, staying low, not being stifff, how he moves etc. If he can prove he’s that type of athlete he’s going to blow up because he has everything else and shows the ability that he can be that player. There’s no question that he is powerful enough to play Division I football. Had he been able to camp this summer in a normal non-COVID year, we would see an offer in my opinion. Someone will be happy they gave him a shot. If he doesn’t get that FCS or FBS shot, the MIAA will be very, very happy they landed him or a Kansas Juco can put him where he belongs in a couple years. When you start to look at the top kids without a Division I offer, he is on the short list of that. It's not all about Division I though, there are a ton of good programs out there regardless of what Division and its just a matter of what you do at them once you get there, but your goals are obviously to reach the highest level you can. He’s a very nice kid too and I’ve enjoyed talking to him over the summer.”

Possibly if people keep their heads on straight

My size, power, and work ethic

It’s great. Love running out of the tunnel with band playing, nothing like small town football.

All of the work that has been put in to this point will take show.

Team meals… No, probably friendship and brotherhood that comes with.

Powerlifting and Track, short putter, and one of if not the best powerlifter in the state.

Intense, fun, get in get out. Business as usual.

Everyone was much more focused, work ethics and attitudes were much better this year.

Favorite is K-State and Iowa State just waiting for my dream school to give me the shot.

Riding four wheelers down in the river.

OL coach at some University.