v Faces in KS: Isaac Detweiler - Sports in Kansas 
Warning: include(../includes/bodytag.php): failed to open stream: No such file or directory in /home/kansass/public_html/ks/news/index.php on line 36 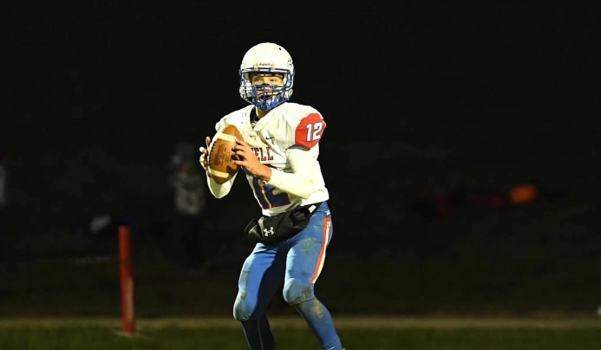 Axtell High School, last years 8M-II state runner up was led by one of the better small school stars we’ve seen in recent memory in 2020 graduate Quinn Buessing. Buessing and Axtell both made headlines all-last season for their individual and team success. Buessing, who will be a freshman at Highland this fall, was a four-sport all-state athlete, including the 8M-II Player of the Year at Sports in Kansas in 2019. He was the starter in the Kansas Shrine Bowl among all-classes from a school that had just 43 students in its entire high school in 2019-2020.  Buessing led the team to a state runner-up finish and first state football appearance in 26 years. Additionally he was a 1,000 point scorer, all-state XC and would have been a repeat all-state track athlete. His name will be known to 1A and the 8-man ranks for years for his accomplishments.

When Buessing was injured last year in the first quarter against 8M-II power and rival Hanover, a freshman stepped in at quarterback and led them to victory over Hanover (28-26). That freshman was Isaac Detweiler.

It’s not very often that you get featured on a statewide network as a preseason all-state football player entering your sophomore year. That is until you do what Detweiler did as a freshman last year.

Detweiler did it all in his first year of high school on the football team last fall, led by his father, Eric. He passed for 321 yards on 33 of 49 compeltions, rushed for 511 more (8 TD) and had 61 receptions for 855 yards and 11 touchdowns. Axtell beat Hanover twice last year and would make it all the way to the title game where they lost to Osborne in the championship.

Now a sophomore, who stands 5-foot-11 and weighs 160 pounds, he is looking to take on a bigger role as he moved into the quarterback position full-time. While Q. Buessing may be gone and everyone may think they will be down, not so fast, the team returns five of its eight starters on each side of the ball. Kolby Talbot is looking to be one of the top defensive lineman in 8M-II this season after earning all-state honors in 2019 as a junior. He had over 100 tackles from his nose guard spot. George Volle and Mitchell Buessing will also be big-time offensive weapons this season for Axtell. Each could be 1,000 yard type guys in their positions.

Detweiler is much more than a football player though and has a lot to prove on the field with three seasons left. He is also an oustanding student where his GPA is 4.0. He likes math and physical eductaion as his favorite subjects in school. Detweiler lives on a pig farm and eventually sees himself as a farmer after a college football career. Of course, as we are sure he is to many at the school, his role model is Quinn Buessing and now will get an opportunity to chase some of his records over the next three years.

Its crazy, every person in the town is at the game yelling and cheering it is a blessing to live in a small town where everyone knows everyone

Hitting people along with the atmosphere on Friday night

Basketball I play PG and started varsity. Was going to do track but got canceled due to covid and played baseball this summer I play Catcher and Pitcher

The border bar and grill in Summerfield, Ks you get a lot of food for a little money

I live on a family owned and run pig farm, and my dad is my head high school football coach.

Aything else to add?

Thanks for doing this story on me!