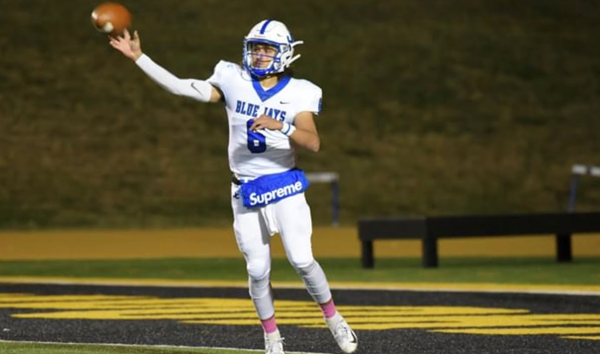 Last season as a junior Junction City quarterback Andrew Khoury put himself on the map as one of the best quarterbacks in Kansas. Khoury was one of the biggest breakout and surprise players in all of Kansas.

After entering last season with just 700 career yards and zero starts Khoury passed for 2,342 yards and 28 touchdowns in leading Junction City and head coach Randall Zimmerman to an impressive 8-3 record. He was one of nine quarterbacks returning in Kansas this season that passed for over 2,000 yards last season. He earned Sports in Kansas All-Non Senior team for his efforts last season

Khoury’s breakout moment last year was a 22-yard touchdown pass to Ethan Alcorn with 0.04 remaining in the game to beat highly regarded Topeka High 48-41 on the road to put them at 4-0 on the season. The previous meeting was a 56-28 win by Topeka in 2018. Khoury was 5-0 in his first five starts before losing a three-point game to Manhattan (31-28) in week six. Junction City also had losses to Emporia by one (14-13) and to Topeka in the playoffs (35-14) but 2019 was a huge turnaround for the program that went 4-5 in 2018, losing their final three games of the season.

Khoury has nice size as he stands 6-foot-1 and weighs 200 pounds with a 4.88 40-yard dash time. He is known for his big arm and decision-making ability on the field. He is also fairly-strong in the weight room. especially for a quarterback with a 235 bench, 335 squat and 265 clean. This time last year he weighed just under 180 pounds.

Not only does Khoury get it done on Friday nights in JC he also gets it done in the classroom with a perfect 4.0 GPA. His favorite subject is history. He was also an all-state baseball player as a sophomore in 2019 but missed this season because of COVID-19. Khoury plays both outfield and pitcher. Khoury hit .443 in 2019 as a sophomore

Junction City also has the return of Russell Wilkey at running back/slot who will be a four-year starter for the Bluejays this season. Running back DJ Giddens and receiver Marcello Mussey are also expected to have big seasons. Khoury also feels very confident about his offensive line this season. Defensively expect defensive backs Javon George and Jordy Irby to have big years along with linebacker Sadiki Smith.

We caught up with the senior standout student athlete below in the latest Q&A edition of Faces in Kansas.

Chet Kuplen, CEO/Founder of Sports in Kansas, on Khoury

"He had one of the best years in Kansas last year and coming into the year nobody knew of him besides some people in 6A baseball. They werent far away from being a team with a 10-1 record either as they lost a couple close ones. He really showed what he was capable of in some of the drives, especially the game winner against Topeka last year for the big upset. They were 4-5 the year prior, so he's definitley a difference maker. He's packed on nearly 20 pounds and has gotten stronger in the weight room. Hoping colleges can make it out to see him this year because I think he has a chance to surprise some people. It's been a while since we've seen a state champion in the Centennial League in 6A or 5A for football, since 2008 when JC won it I believe. I certainly think JC will be in the mix for a deep run on 6A West. Centennial League has a lot of solid players this year."

This feature is presented by Flint Hills OB/GYN. Proud to support local athletics.

I got involved in football when I was a third grader and played the youth football for the JR Jays and I fell in love with the game ever since.

My overall goal is to go undefeated and win a State Championship! My individual goals for this season is to throw for 35 touchdowns and 3000 yards.

We definitely have a shot to make a run this year.  We have a lot of returning starters that know what we have to do to get the job done.  We are solid everywhere on the team so I excited to get this year started.

The thing that makes me such a force as a player is I can make any throw on the field and with the experience from last year, have the ability to make quick decisions.  I also am super competitive so I will do anything to win.

The atmosphere in Junction City on a Friday night is like no other.  There is nothing better than playing football under the lights in front of a great community.

They should come to one of our games because we are an electric football team that puts on a show every single game.

My favorite thing about football is the rush of being on the football field and throwing a touchdown.

I play baseball.  I am a pitcher and an outfielder.  My favorite thing about baseball is squaring up a baseball.

Playing for Coach Z is the best thing that could have happened to me.  He is a great coach in ever aspect.  He has taught me discipline, to be a competitor, and has gotten me ready for the real word. He is one of the best coaches in Kansas.

Me and my teammates have been lifting multiple times a week and have been working on the football field whenever we had the chance.

I am looking to continue my football career to the next level.  I want to play football for as long as I can.  In college I want to study something in business.

My favorite thing to do when I am not playing sports is hangout with my friends and have a good time.

I see myself in 10 years being successful in all aspects of life no matter what I am doing.

My favorite subject in school is History.  I am a hardworking student with a 4.0 GPA

My role model is my dad.  He pushes me to be the best person that I can so I can be successful.

The best place to eat in Junction City is Stacy’s Breakfast.

None of my other siblings played football.

I am a Christian and nothing comes before God!