v Faces in KS: Andrew Schwinn - Sports in Kansas 
Warning: include(../includes/bodytag.php): failed to open stream: No such file or directory in /home/kansass/public_html/ks/news/index.php on line 36

Andrew Schwinn is looking for a big year for MHMA. (photo: Twin Images) 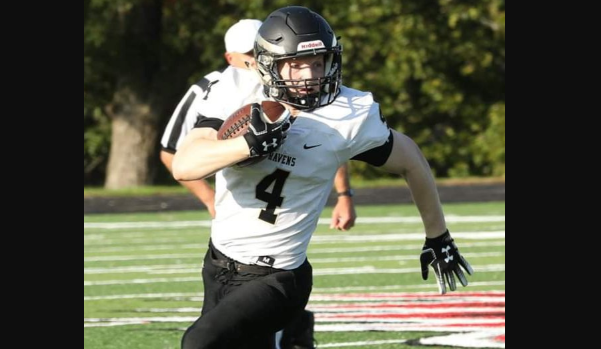 Maur Hill-Mount Academy senior football player Andrew Schwinn is looking to be one of the top small school defenders in Kansas this season.

He has a pretty good resume for achieving that nod as he enters his senior season with some solid accolades. Schwinn, who has played football since the third grade, had 113 stops last season for MHMA as a linebacker and 101 more as a sophomore in 2018. Schwinn also forced five fumbles last season. He’s also added over 1,000 yards rushing in his career out of the backfield. He has twice been an All-Non Senior Honorable Mention pick at Sports in Kansas.

While Schwinn may not have the size that college recruiters look for at 5-foot-10 and 190 pounds, he certainly has the strength. Schwinn has a bench of 315, squat of 400 and clean of 275 pounds. He also has a 4.65-4.67 range 40 (both handheld and laser time). Schwinn could project at the collegiate level as a safety or linebacker.

Schwinn also gets it done in the classroom with a 3.95 GPA including a 4.0 GPA last semester. His favorite subject in school is math.

While Schwinn is a little underrated to many recruiters because of size it’s not the first time that MHMA has had players overlooked. Kansas State starting running back Harry Trotter, a 2016 MHMA alum, only had junior college and NAIA looks out of high school before going on to earn a scholarship at Kansas State after junior college and walking on to Louisville. Jack Caudle and Abe Siebenmorgen were also very underrated players last season for the Ravens.

Chet Kuplen, Founder/CEO of Sports in Kansas, on Schwinn

"He has the opportunity to be one of the best players in 2A this season. He is extremely strong, specifically for his size. He also moved very well with his agility. Like many Kansas kids, he is being slept on because of his height. If he had a couple more inches I think you would see most of the MIAA with offers on him right now. He has done everything he possibly can do to work hard to put himself in a position to be looked at and someone will find themselves a solid ball player. What level that will be? We shall see. Harry Trotter experienced the same thing a few years back, also a Faces in KS featured player by us. Not saying he's a Harry Trotter by any means and will play on the other side of the ball, but don't ever count out a small school athlete in Kansas. Really enjoyed talking to all of the Maur Hill-MA athletes and students last year on the power of social media tour. What a great place with a great focus on academics and activities. Kids are prepped for the real world after leaving this place."

This feature is presented by Twin Images, proud to support MHMA Athletics.

I have been playing football for as long as I can remember from years of flag football to starting tackle football in 3rd grade.

To be all-state 1st team, lead my team to a state championship, receive multiple D1 offers, get over 130 tackles, and get over 1500 rushing yards.

Definitely, we have a lot of guys who are willing to put in the work and who are just flat out talented football players, we will be a big threat in the 2A division.

I am a very versatile football player, I can make plays everywhere on the football field, my combination of speed and strength separates me from the rest, and I am the hardest working player you’ll find.

There is no feeling like Friday night lights, running out on the field with the crowd cheering gives my teammates and I the chills. The great feeling motivates me to make big plays and show out every time I step out on the field.

My team and I are going to put on a show, and my unique skillset and playmaking ability will provide the audience with something they want to see.

Shane Sachse who is a tight end lineman hybrid is a great athlete who can make plays for us. Grant Kocour is a very skilled wide receiver who made big plays for us last year. Willie Kesinger is a great up-front player on defense.

Hitting, because I know most of the time I’m up against someone I’m going to come out on top.

I play basketball and track. In track I’m a sprinter, a jumper, and was going to throw during the 2020 season before it got cancelled. I ran the 200, was a 4x1 alternate, triple jumped, and also ran the 4x4 a couple times. In basketball I play down in the post because even though I’m undersized for that position, my strength gives me an advantage. I am a key rebounder and defender for the team.

It’s really great to play for our Coach. Last year was his first year and he fit in well with the team. He worked well with what a lot of us were used to while also implementing new concepts. He is a great leader and cares about each player. He works to make sure our football team feels like a family.

We did as much as we possibly could with the restrictions. As soon as we were allowed to start lifting, we were in the gym, as soon as we were allowed to have football practice, we were playing football. When I wasn’t able to be with my team though, I was putting in constant work with TopSpeed Strength and Conditioning. I have been working with many D1 commits, current college football players, and NFL players.

I am very interested in playing college football and it is my ultimate goal right now. Once I get there my goal will be going pro. Right now my plans will be based on the offers I receive.

I’d probably have to say hanging out with my friends which includes a variety of things whether that'd be just chilling, swimming, having airsoft gun wars, playing video games, etc.

If all goes according to plan I will be in the NFL with a wife and a kid or two. Hopefully I will also be settled in one area I know I’ll be staying at for a while.

I’d probably say math because I’m better with numbers than I am with words. I am an active student who tries to achieve the best grades I can and I have a cumulative GPA of 3.95 and had a 4.00 this last semester.

Overall, I would say my role model is my dad. He is extremely hard working and provides for our family every day. He helps me all the time when it comes to football and I wouldn’t be where I am today without him. Football wise, I would say Tyrann Mathieu is my role model because he is considered an “undersized” player but he is still a force on defense. He is a vocal leader, an amazing player, and a great man.

This is a very tough decision as my friends and I love a lot of restaurants but I have to say Towne Pub. It is a small local restaurant that has a very homey feeling and an amazing double bacon cheeseburger with cheese curds. And don’t forget the apple pie a la mode.

I train year round for the sport of football.

My school (I-Mac) I was planning on going to in high school shut down when I was in 8th grade.