v Faces in KS: Dayne Ashenbrenner - Sports in Kansas 
Warning: include(../includes/bodytag.php): failed to open stream: No such file or directory in /home/kansass/public_html/ks/news/index.php on line 36

Dayne Ashenbrenner is looking for a big year for Manhattan. (Gold-Image Photography) 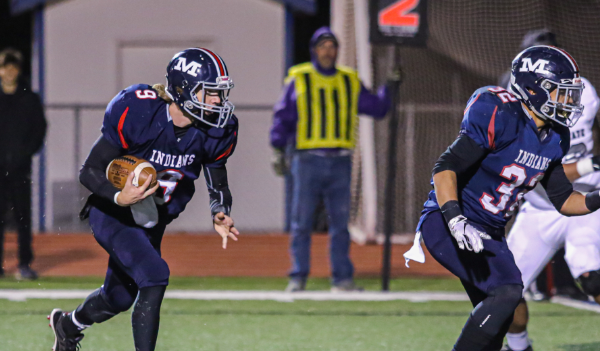 Manhattan required a new starting quarterback for 2018. The Indians, perpetually one of Kansas’ most consistent programs, had enjoyed a strong run of signal callers with coach Joe Schartz and his physical, run-heavy attack.

Schartz, a former Washburn quarterback and member of the school’s 2015 Hall of Fame class, played for the Ichabods in the mid-90s. When he graduated, Schartz held school records for passing yards (5,527) and total offense (6,622).

Schartz, now entering his 12th year as the Manhattan head coach, has posted a 92-23 career record. In ’14, the Indians had 1,000 passer Eric Prockish.

Then, Manhattan brought in Ian Trapp, an Ellsworth transfer. The Indians started a trend of successful quarterbacks with little to no previous experience in the Manhattan system, a group that includes current senior starter Dayne Aschenbrenner. Trapp was an extremely talented player who started for Ellsworth as a freshman and sophomore, including at quarterback as a sophomore.

As a junior in ’15, Trapp nearly delivered 1,000 yards both rushing and passing. Overall, he tallied around 2,100 yards in total offense. His senior year, Trapp earned first team all-state KPreps with 2,217 total yards and 35 scores accounted for.

Manhattan finished 9-1 and averaged 41.9 points per game, the best in the program since at least ’06. Trapp is at Washburn and has seen spot time at quarterback.

In ’17, Manhattan finished 8-2 and had Talon Claussen for one season at quarterback. Claussen, injured as a junior, had shifted from wide receiver to quarterback. He finished with 598 rushing and 669 passing yards to earn all-area and all-league accolades.

Entering ’18, Manhattan had three players in the mix: then-sophomores Aschenbrenner and Mason Reid and junior Sam Hankins. However, Hankins elected to not play football and focus on his javelin career. Hankins has won three straight javelin titles and would have been heavily favored for a fourth this spring if the track season had not been cancelled because of COVID-19. Hankins has been ranked first in the country and has signed with Texas A&M, a track powerhouse.

Schartz officially named Aschenbrenner the starter a few days before the season opener, according to Manhattan Mercury archives. Aschenbrenner first started in the little Indian football program when he was in second grade. Then, Aschenbrenner missed his entire freshman year after he suffered a broken ankle in a preseason scrimmage.

The move has yielded back-to-back big offensive seasons for Manhattan. In ’18, the Indians went 10-2 and averaged 39.5 points per game. Aschenbrenner completed 52 of 104 passing for 850 yards and 10 scores and rushed for 650 yards.

It marked the second straight big year from a running back after Kevontae McDonald delivered 1,628 yards and 30 touchdowns in ’18.

“We play physical, clean, consistent football,” Aschenbrenner said. “Anyone who enjoys old school football is sure to love watching us play.”

This year, Aschenbrenner is one of the state’s most experienced quarterbacks for any class – especially for the large classes – as Manhattan looks to reach a title game for the first time since a runner-up showing in ’01. The Indians’ two titles came in ’74 and ’88.

Ilalio, a 285-pound state wrestling placer in 6A, has a 4.0 GPA and is part of National Honor Society (NHS). He has lifted 367 in bench, 480 in squat and 315 in clean. Ilalio has recently picked up at Kansas State offer. He has earned offers from Army, Air Force, Emporia State, Ivy League’s Cornell, along with Eastern Illinois, Butler County CC and Dodge City CC.

Ilalio, Aschenbrenner, Ty’zhaun Jackson and Reid, who has transitioned into an all-purpose role, are among the Tribe’s captains for Fall 2020. Last year, Reid recorded 31 offensive touches for 363 yards and three scores. Jackson, a defensive back/athlete, is also in NHS and recorded 46 tackles and pair of special teams touchdowns in eight games. He recorded a 31-inch vertical.

“The entire O-line is the key to the offense without them we wouldn’t get anywhere,” Aschenbrenner said of 2020. “Lorenzo Wilhoite and Joe Hall are going to be weapons for us on the outside. Ty Jackson in the defensive backfield and Damian Illalio and the D-line unit work and play extremely hard and will be the leaders in stopping opposing offenses.”

Manhattan has the sixth-most wins in state history, and has won 67 percent of its all-time games. The Indians have just four losing seasons since 1969: four-win marks in ’98, ’99, ’02 and ’07, according to the Kansas Football History database.

From ’06-19, Manhattan is 111-35, including 75-15 in Centennial League play. Manhattan has won/shared a conference title in 10 of the last 11 years. Manhattan is tied for seventh in state history with 33 playoff appearances, according to Prep Power Index.

However, Manhattan’s only trip past the quarterfinals since ’06 is a semifinal berth in ’18. The Indians have lost to Derby in the playoffs each of the last three seasons.

This season, Aschenbrenner has set lofty goals of an undefeated record and reach state. Individually, he would like to deliver 3,000 yards of total offense and earn first team all-state. Aschenbrenner believes Manhattan “definitely has a shot” to make a deep run. The Indians have returned eight offensive starters and six defensive starters.

His grandparents are Stephen and Carol Aschenbrenner, who have been married for 52 years. They combined to teach/coach 69 years at Leoti-Wichita County. Dayne’s father, also named Stephen, is an Indian football coach and Manhattan social studies teacher. In 10 years, Dayne would like to be on a path to be a district attorney.

He has received football offers from University of Chicago, Pomona (Calif.) College and Washington and Lee (Va.), all three high-academic, private, Division III schools. Aschenbrenner has contact with Johns Hopkins and Ivy League’s Brown and Columbia.

“I think that my experience, not only in high school but just being around football my whole life, helps me make the right decisions in big moments,” Aschenbrenner said.

My parents signed me up for little Indians football in second grade and I’ve been around football every fall since then.

My goals for the team this year are to have an undefeated season and make it to state. My goals for myself are to put up 3,000 yards of offense and be first team All-League

Yes, we definitely have a shot

It is the best feeling in the world. Nothing compares to coming out of the locker room to the sound of the Harleys to play under the lights at Bishop Stadium

We play physical, clean, consistent football. Anyone who enjoys old school football is sure to love watching us play.

The entire O-line is the key to the offense without them we wouldn’t get anywhere. Lorenzo Wilhoite and Joe Hall are going to be weapons for us on the outside. Ty Jackson in the defensive backfield and Damian Illalio and the D-line unit work and play extremely hard and will be the leaders in stopping opposing offenses.

Everyone plays exactly once a week so you know that both teams are absolutely prepared for Friday night and you get everyone’s best shot every week. No excuses.

I also play baseball at Manhattan High. I’ve played Varsity for two years, my freshman year I started in Left field and my sophomore year I spent most games behind the plate.

Coach Schartz is an extremely smart and experienced coach. He always holds me and my teammates accountable and coaches to be as good as we can be.

This off-season got kind of tricky because of the pandemic but for the last couple weeks I’ve been able to meet with the offensive skill to throw and run and we’ve all been trying to lift on our own.

I have been offered by Chicago and Pomona, and I’m talking to Brown, Columbia, Johns Hopkins, and Washington & Lee.

I would like to be on my way to a position as a District Attorney somewhere, helping to enforce the law and uphold people’s rights to a fair trial

My favorite subject is History and I have 3.90 GPA

Coco Bolos, if you’re visiting Manhattan from out of town you’ve got to try it.