v Faces in KS: Cayden Winter - Sports in Kansas 
Warning: include(../includes/bodytag.php): failed to open stream: No such file or directory in /home/kansass/public_html/ks/news/index.php on line 36

Cayden Winter of Andale is looking to repeat as a state champion in 2020. (photo courtesy of Winter) 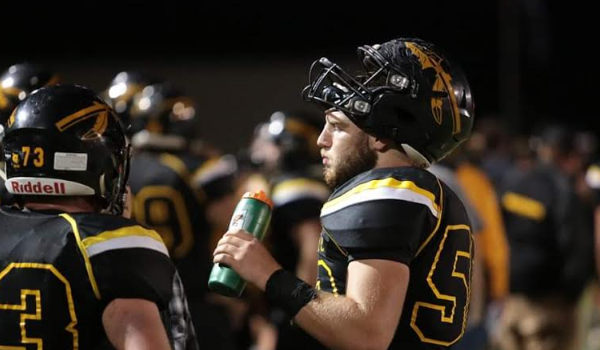 Andale has been one of the best programs in Kansas in recent memory as the Indians won the 2019 3A state title in dominating fashion last season under head coach Dylan Schmidt.

Numbers are always off the charts in football participation at Andale for a 3A/4A high school as they usually get anywhere from 75-95 kids out for their high school team. Consistency has been key and they always reload. This season is no different as they return four starters on offense and six starters on defense.

One of those starters is Cayden Winter who earned Sports in Kansas Non-Senior honors last season, honoring the states top players that aren’t seniors annually. Winter, who stands 6-foot-0 and weighs 225-pounds, is one of the best lineman and defensive ends in Class 3A football. While he may not have Division I size for a lineman it doesn’t change him from being one of the best high school football players in Kansas. He has twice earned all-league offensive and defensive line over the last two seasons.

Not only does Winter get it done on the football field on Friday nights in the fall, he’s also an outstanding wrestler at Andale High School. He was last season’s 4A state runner-up in the 220-pound class. He uses his leverage and footwork in wrestling to dominate on the football field. Winter has wrestled for 12 years.

Winter is a very explosive player with a bench of 290, squat of 410 and a 290 pound clean all while running a 4.9 40-yard dash playing in the trenches. Not only is he explosive he is very, very physical.

Andale has huge expectations this year as they always do with the return of Winter, Eli Rowland, Noah Meyer and Caden Parthemer who could all be All-3A caliber picks this season with big years.

This is also probably a pretty special group for Andale head coach Dylan Schmidt as this group of seniors were freshman in his first year as the head coach. Schmidt is 36-2 as the head coach at Andale over the last three seasons, as are this year’s 2021 seniors entering the 2020 fall football season. One of those losses to state powerhouse Bishop Miege in the 2017 title game and the only other loss coming in a 21-19 loss to Pratt in the state playoffs in 2018. Pratt would go on to be the state runner-up to Sabetha in overtime, 43-42.

We caught up with the potential all-state pick below in the latest Q&A edition of Faces in Kansas.

This feature is presented by Winter's Bodyshop, proud to support Andale Indian Football. Best of luck this season!

Chet Kuplen, CEO/Founder of Sports in Kansas, on Andale

"Always impressed with the numbers at the school in participation, specifically with football and track. Sure they are a big 3A high school and 4A in other sports most of the time, but they are getting 75-95 kids out in football per year, I know some 5A/6As that would beg for that. I want to say their 2014 title team had 98. You just don't see that in a lot of small towns across the state. They are getting the most out of their kids and getting it done in the weight room. Do they have a lot of major college talent? Not everyone is a B.J. Finney (walk-on) or Mason Fairchild coming out of high school but they always have so many consistent and tough kids. Speed is always a factor when you play them and if you cover track like we do at Track in Kansas, then you realize how much they have. It's a community that buys in to multiple sports and participation, girls and boys. Coach Schmidt has done an incredible job since taken over. They have some really talented pieces back this season and could be the favorites once again. Last season, I felt like they were head and shoulders better than everyone else in 3A, they did have one close scare with Cheney but later got that back. 3A is a gauntlet so we shall see."

My dad and brother played and I fell right in line with those two.

Same as always to win a State Championship

I believe we have a shot at another title.

I understand the game very well and I’m very physical up front.

There is nothing like Friday nights in Andale. The town shuts down to come watch us. I wouldn’t want to play anywhere else.

We play tough football that is fun to watch. And we have very exciting players to watch

Nothing is given to you. You earn what you out into it.

Coach Schmidt loves the game of football and knows how it should be played. He preaches about doing the right thing all the time. My freshman year was Coach Schmidt’s first year as head Coach. It’s interesting to see how we developed as players and as young men and how he has grown with us as our coach.

It was tough this year with Covid but we sourced out equipment to lift at home and a lot of senior led nights at the football field.

My dad he has taught me what it means to be a man.

I like the Little Bear Bar they make a nice sandwich.