v Faces in KS: Alex Key - Sports in Kansas 
Warning: include(../includes/bodytag.php): failed to open stream: No such file or directory in /home/kansass/public_html/ks/news/index.php on line 36

Alex Key was a huge part of Derby's success as a sophomore. (photo courtesy of Key) 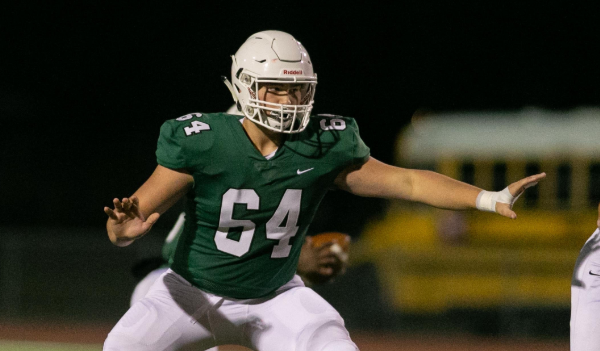 Derby has been an absolute powerhouse over the last several seasons in Kansas high school football with 6A state titles in 2013, 2015, 2016, 2018 and 2019 under head coach Brandon Clark. It seems like the Panthers are always hit heavy by graduation and reload instead of rebuild. On paper, entering 2020 they return just four starters on each side of the football. We’ve certainly seen that before and then Derby is on their way to a state title in late November. One of those four starters returning is junior offensive lineman Alex Key.

Key, a rare starter on an always loaded offensive line at Derby as a sophomore, earned all-state honorable mention last season on a perfect 13-0 Panther squad. He also earned Non-Senior Team honors from Sports in Kansas, which honors the top juniors, sophomores and freshman in Kansas annually. The 6-foot-3 and 270-pound tackle on the offensive line is looking to be one of the best juniors in Kansas this season. Key should also generate some college interest this season as he continues to get stronger in the weight room. He has a clean of 295 pounds and a squat of 405 pounds at the end of his sophomore year. He has also shown quickness at the tackle position with 5.1 40-yard dash speed.

Like most Derby Panthers, Key grew up watching the high school team play and was part of the Derby Junior Football program. Derby has built a small-town culture in a metro area that not many have. What do we mean by that? You can go to some stadiums on a Friday night in Kansas City and Wichita and you wouldn’t know there’s a game. Not the case when you check out the Derby Panthers on a Friday night in the fall. Kids want to be a part of Derby football, whether that’s on special teams as a senior, a star player or a role player on Friday nights.

Derby also returns one of the states most exciting players this year in Lem Wash. We expect Wash to be one of the top playmakers in Kansas after earning Non-Senior SIK honors a year ago. Another player to keep an eye out on is sophomore running back Dylan Edwards who has tested off the charts at combines this summer with sub 4.4 handheld speed in the 40.

Not only does Key get it done on Friday nights, he also gets it done year-round in the classroom. The junior-to-be features a perfect 4.1 GPA. His favorite subject in school is engineering.

We caught up with the potential all-stater below in the latest Q&A Edition of Faces in Kansas.

This feature is presented by Big Tool Store, proud to support Alex Key and Derby Panther Football. Best of luck this season!

Chet Kuplen, CEO/Founder of Sports in Kansas, on Key

"It's not common to dominate as a sophomore for a 6A program and he did that at times last season. He has an opportunity to put himself on the map this season as one of the best juniors in Kansas. He will need a little work in the weight room in certain lifts but we also have to remember he has two full years of high school left, he's on track to do big things. I don't know exactly what it is that they are doing in Derby under coach Clark but it's pretty amazing, it's a machine and it's not going away anytime soon. The culture they've built is incredible and not something common you see at a lot of 6A's. Until someone can take out Derby they are going to be the favorite in 6A. I caught heat last year for saying they were the favorite from a lot of Topeka people but until someone can consistenly beat them year in and year out, they are the kings of Kansas football."

Grew up watching Derby football and like most little kids I dreamed about being on the field. First year was in 2nd grade for the Derby Junior Football program.

To win state and prove everyone wrong that thinks this class won’t be able to make it there. Also, be all state 1st team.

I really do believe so. Everyone has been working very hard this summer without the coaches. We came back to practice in amazing shape. We want this super bad and the driving force of proving doubters wrong and ourselves right.

The atmosphere is so incredible and I believe it is like no other town out there. The stands are always overflowing from the entire town showing up and supporting us. The crowd and student section give you that confidence to give it your absolute 100%.

Complete dominance and to watch brotherhood. Our team has always been a family because of the proud tradition of Derby Junior Football. We rely on each other for everything. Also to see how the entire town of Derby comes behind us and shows their love.

No I do no to play any other sports. Use to play basketball but quit after middle school.

Great, he wants the best for us which leads to the best for the team. He has a great passion for football and uses that to his ability. But he also emphasizes not only making us great players but to be great men.

During the Covid-19 lockdown we would meet at different places in small groups and had workouts. We wanted to strive to be better with the cards that were dealt to us.

I am very interested at the next level and would love to try. My goal would be to make it D1 and prove the people along my life that said I wouldn’t be anything.

Working out and hanging out with my fellow teammates.

I see my self with a job that can withhold my future family. If it all goes to plan that would be the NFL.

My favorite subject is engineering. I love to figure out how things work and why they were needed. I am a straight A student with a 4.1 GPA

Is my youth pastor Andy Jones. He shows everyone he meets love and compassion. He also works very hard to educate in a way teenagers can understand.

I just thank the Lord Jesus Christ for the opportunities that he has given me. He has guided me to be the man I am today.