v Faces in KS: Jaxson Gebhardt - Sports in Kansas 
Warning: include(../includes/bodytag.php): failed to open stream: No such file or directory in /home/kansass/public_html/ks/news/index.php on line 36

Jaxson Gebhardt is looking for a big year in 2020. (photo: Jessica Sprecker) 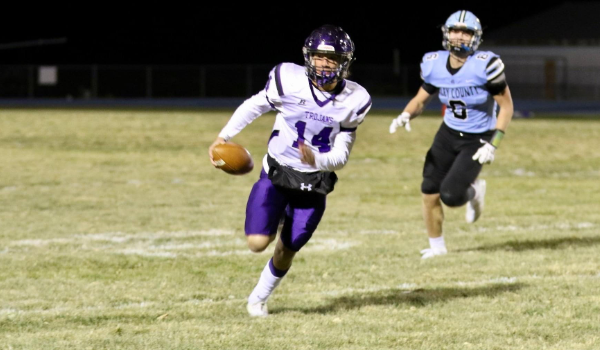 By CONOR NICHOLL for Sports in Kansas - email - Cnicholl1@gmail.com

Southeast of Saline coach Mitch Gebhardt served as the Lincoln head football coach from 2000-2007, according to the online database at Kansas Football History. His son, Jaxson, was able to see “the inner workings of football” at Lincoln.

“I have always had kind of that feel of Friday Night Lights,” Jaxson said.

When Jaxson was five, the family moved to Southeast of Saline, located 60 miles away. Coach Gebhardt eventually took over as head Trojan football coach in ’10, when Jaxson was in second grade. Jaxson became a ball boy for his father and really enjoyed the experience.

Coach Gebhardt has made SES into a consistent winner. After a decade with the Trojans, Gebhardt has delivered a 62-35 record, including 36-12 in North Central Activities Association play.

Since ’11, SES has won seven or eight games seven times. The only two losing seasons came with 4-5 showings in ’12 and ’17. The following year, the Trojans posted three- and four-win improvements. Coach Gebhardt is long known for his dual-threat quarterbacks and high volume of snaps, trends that have continued with his son. SES is also known for its home-field advantage.

From ’13-19, SES is a collective 24-8 at home, and 23-14 on the road. Every quarterback has thrown for at least 916 yards and rushed for at least 481 in that span. Six of the seven years have produced at least 21 touchdowns accounted for at quarterback. Jaxson labeled his dad his role model and has enjoyed playing for him.

“We are exciting to watch because of the fast pace offense we play,” Jaxson said. “We also have a great fan base. And our stadium is unique because it sits in the bottom of the hill.”

Jaxson took over as the starting quarterback as a sophomore and helped SES to an 8-2 record, tied for the most wins for the school since a 10-1 season in ’06. Last year, SES posted a 7-3 record.

Jaxson’s twin brothers, Luke and Jake, were freshmen last fall. While Jaxson is one of Kansas’ most experienced quarterbacks, he especially shined on the defensive side with seven interceptions in ’19. SES had an average score of 35-17 and posted its fourth undefeated league slate in the last five years.

“I think the bond is really good between me and my dad on the field,” Jaxson said before the ’19 season. “He is obviously coach to me, and at home, we can sit down and have a normal conversation about football, and never have grudges ever, like it’s just a really good relationship with me and my dad. He is coach to me on the football field and dad at home.”

This season, SES is highly experienced and will play in Class 3A, District 6 with Colby, Goodland, Smoky Valley, Russell, and Scott City. It’s a big change from the last two seasons where SES had to go east with Riley County, Rossville, St. Marys, Council Grove and Mission Valley. The Trojans were a combined 1-5 against Riley County and Rossville in the past two falls.

Gebhardt said the team’s goal is a state title. SES’ only season ever past the quarterfinals was a state championship in ’05 with former coach Pat Haxton, now at WaKeeney-Trego.

“The coaching staff at Southeast is one of the best and all the coaches complement each other very well,” Jaxson said.

“I see myself as a good leader on the field,” Gebhardt said. “I start on both sides of the ball and I feel like I can make plays the entire game.”

SES returns 95 percent of its rushing yards and its top-eight tacklers for ’20. Senior Bryant Banks led the team with 174 carries for 969 yards and 21 scores. Junior Matthew Rodriguez enjoyed a huge junior year with 94 tackles, 20 for loss. Seniors Tyler Breeding, Sterling Harp and Eli Harris all return after they made between 47 and 75 tackles and each had between six and eight tackles for loss.

In ’13, coach Gebhardt had Cody Schlesener at quarterback. He passed for 916 yards, rushed for 481 yards and accounted for 26 scores. The following year, Schlesener delivered 1,145 passing and 1,052 rushing with 27 TDs accounted for.

Then, Bryce Banks started for two years and passed for 3,820 yards and accounted for 51 touchdowns. Hunter White started in ’17 with a mammoth season – 1,329 passing, 1,481 rushing and 42 scores accounted for.

“We have been playing together for a long time, so we have a really good connection with each other,” Jaxson said.

This feature is presented by Jeff Wells of American Family Insurance in Salina. Proud to support local athletics and the Trojans.

This feature is presented by Southeast of Saline Booster Club. Best of luck to all of our teams this school year.

Our atmosphere at our field is electrifying. As soon as warm-up starts you can feel the intensity rising. It is one of the best places to play.

We are exciting to watch because Of the fast pace offense we play. We also have a great fan base. And our stadiums is unique because it sits in the bottom of the hill

My favorite thing about football is the brotherhood I share with the people I play with.

Basketball- I start at point guard but play all positions.

We started to hit the weight room really hard in the winter and continued to do so until covid-19 hit and we started doing work outs at home. Hopefully as the summer progresses we can get back to making gains as a team in the weight room

I love spending time with my family, cutting wheat and swathing hay

My dad has been my coach the last three years and I have enjoyed playing for him.