v Faces in KS: Tyler Bowden - Sports in Kansas 
Warning: include(../includes/bodytag.php): failed to open stream: No such file or directory in /home/kansass/public_html/ks/news/index.php on line 36

Tyler Bowden is looking for a huge year for the Firebirds in 6A. (photo: Quinn Miller) 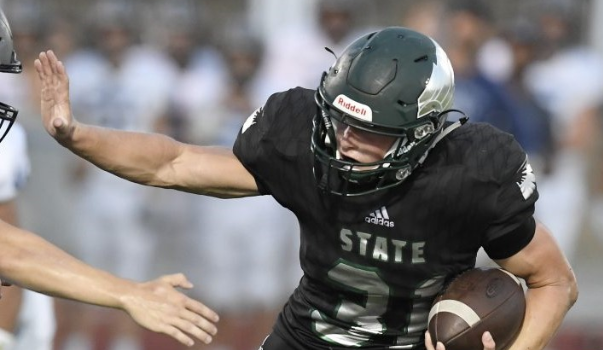 Lawrence Free State first started to play football in 1998. The Firebirds posted a 1-8 mark, still the fewest single season wins in school history. Bob Lisher led the team for the first 22 years of existence. Free State finished 39-48 in the first nine seasons and never won more than seven games in a single year.

Since 2006, Free State has not had a losing record. FS went 11-1 in ’06, still the school mark for single season victories. Two years later, the Firebirds reached its first and only state title game.

Last year, coach Kevin Stewart took over after Lisher retired, and the Firebirds posted an 8-2 record, the program’s eighth consecutive year with at least eight victories. From 2000-09, Free State has a 75.5 winning percentage, third-best in 6A, behind only Derby and Manhattan, according to KPreps archives. In his school history, FS is 157-86 (65 percent).

Free State has produced a bevy of Division I standouts, including offensive lineman Turner Corcoran, a Nebraska signee and the No. 1 Kansas recruit in the Class of 2020. FS’ turnaround in the mid-2000s is in part because of a continued run of excellent, highly productive running backs/dual threat quarterbacks. The vast majority have gone onto highly successful college careers.

Statistically speaking, current Firebird senior Tyler Bowden enjoyed the top individual season in school history last fall – and could break several career records, though has not yet received the college attention of some of past FS standouts. The 5-foot-8, 175-pound Bowden has posted 4.44 seconds in the 40-yard dash, along with 270 bench, 375 squat and 270 clean.

A 3.7 GPA student and National Honor Society member who wants to own a construction business, Bowden helped the Firebirds take fifth in the state 400 meter relay as a sophomore.

Last season, he rushed for 1,859 yards (9.4 yards per carry) and scored 162 points. Known for his excellent speed, agility and balance, Bowden first drew attention when he rushed for 88 yards and a pair of touchdowns in a playoff loss to Derby as a freshman.

As a sophomore, he averaged more than seven yards a carry in spot time. He has rushed for 2,781 career yards. At Free State, Bowden has the single season rushing and points records, along with the career points record. Bowden’s only current offer is from Washburn. This season, Bowden would like to accomplish more history.

In ’06, Ryan Murphy surpassed 1,000 yards rushing and passing in the same season.

In ’08, Chucky Hunter was discussed by the Lawrence Journal-World as possibly the best player in FS annals. Hunter went over 1,000 yards in ’07 and set the single season school rushing record of 1,707 yards in ’08. He finished his career with just under 2,800 yards in two seasons.

As well, quarterback Camren Torneden excelled in the Firebirds’ zone read offense with more than 1,100 rushing yards in ’08. Torneden went on to play at Baker.

In ’11, Sunflower Football League historian Eli Underwood named Hunter the No. 9 running back in the Sunflower League from ’00-10, a list headlined by Olathe North’s Darren Sproles, who starred at K-State and the NFL.

In ’09, Kirk Resseguie had 1,099 rushing yards. He became a multi-year starter at defensive back for Missouri Western and finished his career with more than 140 career tackles.

In 2010, Dylan Perry took over, and Underwood wrote he “was really an unknown.” However, Perry exceeded 1,000 passing and 1,000 rushing. From ’04-08, the entire Sunflower League had four quarterbacks reach 1,000 in both categories. FS had three, according to Underwood’s research.

In ’11-12, Kyle McFarland contributed more than 2,000 yards of total offense both seasons, including 700-plus rushing each fall. McFarland set a then-school mark with 277 passing yards in an ’11 game.

The Dineen brother legacy started in ’13.

That year, Joe Dineen earned Gatorade Player of the Year, accounted for 32 touchdowns, passed for 1,702 yards and rushed for 726. Dineen recorded 382 tackles at KU and briefly was on several NFL rosters. He was a second team All-American for the Jayhawks.

In ’14, Bryce Torneden, Camren’s brother, took over and recorded 1,277 rushing and 1,064 passing yards. He too enjoyed a terrific football career at KU.

Then, Bowden took over as the next great FS back. He broke both Hunter’s rushing record and Dineen’s points mark in a 34-12 playoff win versus Wichita South last fall. In the game, Bowden played just the first quarter and recorded nine carries for 176 yards and four scores.

“As a team aspect we are a fun team to watch because we have a lot of chemistry and we play hard as a team,” Bowden said. “On the other hand, I would say I am a fun player to watch because of my speed, heart, elusiveness and passion for the game.”

This feature is presented by Johnny's Tavern in Lawrence, proud to support local high school sports.

This feature is also presented by McCray Lumber, best of luck to the Firebirds and Tyler Bowden this season.

I started playing football for a pee wee organization (LYF) in second grade.

Yes, we have a lot of returning starters along with a wide variety of size and speed.

My speed, agility, and balance.

It’s an amazing environment to be a part of we have one of the most beautiful fields in the state! Our fan base is second to none and our students body shows out every Friday night.

As a team aspect we are a fun team to watch because we have a lot of chemistry and we play hard as a team. On the other hand I would say I am a fun player to watch because of my speed, heart, elusiveness and passion for the game.

Hanging with friends and getting to be physical.

Coach Stewart is a great coach to play for, he has a ton of knowledge for the game and has a lot to offer to any player.

We had team meetings through zoom calls and shared workouts that we could all participate in during quarantine.

I am speaking with several different schools and am currently just waiting for what feels like the right fit.

Hunting, fishing, and hanging with friends and family.

Math, I have a 3.7 GPA and I am also a member of the National Honor Society.

I am obsessed with cars.