v Faces in KS: Sam Hecht - Sports in Kansas 
Warning: include(../includes/bodytag.php): failed to open stream: No such file or directory in /home/kansass/public_html/ks/news/index.php on line 36

Sam Hecht is looking for a monster season for defending champ Mill Valley. 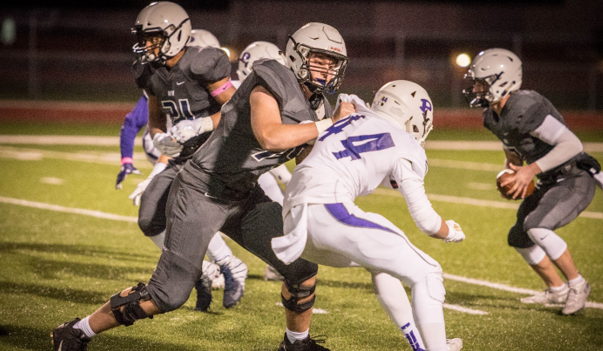 Mill Valley has been one of the best programs in all of Kansas over the last five football seasons. What Joel Applebee has done is pretty incredible to say the least as he has racked up three state football titles in the loaded 5A classification in the last five football seasons with titles in 2015, 2016 and 2019. If we would have told you Mill Valley was a state power entering 2015 you probably would have said we were crazy but it has quickly became that under Applebee. Prior to the state power days, Mill Valley was a team that usually had good regular seasons and early exits in the playoffs with their deepest appearance coming in the round of eight twice (2008, 2013). How has that happened? Sure it’s certainly helped when you have a Christian Jegen, Logan Koch, Lucas Krull, Cole Morris, Joel Donn or Ethan Kremer to go along with many more but MV has elevated its program by switching leagues to the EKL in 2016 and playing an independent schedule prior to that before they join the Sunflower League this season. They’ve also cretated a winning culture with everyone contributing, from the backups, to the starters, to the people in the community. Mill Valley, located in Shawnee, has become a special place on Friday night in the fall.

Players as we mentioned are always a huge part of their success and the solid line play over the last several seasons has certainly made them a state power. It’s no different this season as the Jaguars return one of the best lineman in Kansas in senior Sam Hecht. While Hecht may not get the headlines his teammate, Ethan Kremer, gets as the All-Classes Non-Senior Defensive Player of the Year from Sports in Kansas, he also has a shot to be one of the best of the best in Kansas high school football this season. Kremer is likely the best returning two-way player in the state this season and is a multiple time state wrestling champion with a season left.

Hecht, who stands 6-foot-4 and weighs 250 pounds, was a first team All-5A and All-Non Senior Pick from Sports in Kansas last season on the offensive line. His performance last season has helped him pick up multiple offers from the Division I FCS level for the Class of 2021 at offensive tackle as he enters year number three as a starter at MV. His offers include Abilene Christian, South Dakota State, Eastern Illinois, Abilene Christian, Illinois State, Penn, Princeton, Brown, and Yale. Hecht has major potential as he continues to get stronger in the weight room and features a 515-pound squat and 315-clean. He also has a 4.98 40 and should be able to add weight to his frame and keep the speed.

Football also runs in the family as his brother Ben is a former Sports in Kansas All-State pick for Mill Valley that went on to play offensive line at FCS powerhouse North Dakota State. Hecht also gets it done in the classroom as you can tell from his Ivy League offers with a 3.87 GPA.

Mill Valley makes the move to the Sunflower League this season which could arguably be as tough as the Eastern Kansas League this season. EKL has been known as the powerhouse league of Kansas since the rise of Aquinas,  Blue Valley North, Mill Valley and Miege in recent memory with their titles along with traditional state and EKL power Blue Valley.

Mill Valley defeated Wichita Northwest in last years state title game and returns seven starters on each side of the football to defend its crown. 5A football is a gauntlet in Kansas with the likes of Mill Valley, Bishop Carroll, Northwest and Aquinas, plus many more. In addition to Hecht and Kremer they also return Cooper Marsh who has a shot to be one of the best 5A quarterbacks in the state this season whole Ty Reishus will be one of the best recievers in 5A. Kolten Jegen is also expecting to have a huge year on the defense. They also have a special teams weapon in Chris Tennant who made 14 of 17 field goals last season. Tennant is one of the top kickers and punters in the nation. MV will be a state contender once again in the loaded Class 5A for 2020.

We caught up with Hecht below in the latest Q&A edition of Faces in Kansas.

This feature is presented by Pink Charming Boutique, proud to support Jaguar football and Sam Hecht.

I started playing in the 2nd grade.  My older brothers played and I always knew that I did too.

Win the 5A State Championship

Absolutely!  Most of the Varsity Starters have played together since we were in 2nd grade.  We play very well together.  We don’t give up.

I block with a vengeance. I don’t back down.

Mill Valley has an amazing football community.  Home games are always packed and there is an incredible energy.  I wouldn’t want to play us at home.

You will see an incredible football game in a top-notch facility. There is always an amazing energy in our stadium.

I love everything about football. Winning State Championships are fun!

I don’t play other sports. I began my focus on football my freshman year.

Our coaching staff is the best in State.  Coach Applebee really cares about his players, which drives us to be the best that we can be.

We all workout year round.  There is no off-season is our eyes.

I am hoping to play football at the next level. Playing college football has always been my ultimate goal.

I love to fish and hangout with my friends.

Graduated from college and having my career established.

My o-line coaches, Kurt Bangle and Terrale Johnson.  Their coaching style makes us want to be the best.  Coaching for them just doesn’t end after the season. They drive us to work harder all year long.

I am the youngest of 4 boys. I grew up surrounded by sports.