v Faces in KS: Jacob Younkman - Sports in Kansas 
Warning: include(../includes/bodytag.php): failed to open stream: No such file or directory in /home/kansass/public_html/ks/news/index.php on line 36

Jacob Younkman is looking for a big year for Northwest. (Photo: Northwest Football) 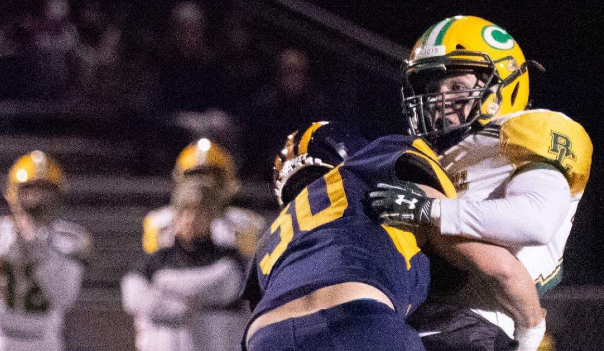 Wichita Northwest is loaded with players that jump off the page for the 2020 football season. Several of those that are being recruited at the FBS and FCS levels of Division I football. It’s a program that has been very good and produced top notch college talent in recent memory including Breece Hall and Marcus Hicks to mention a couple. Their latest success has them as the back-to-back 5A state runner-up in Kansas.

If you know anything about high school football you know that it’s not always about high level offers to be a good high school player. There are great high school football players that may never sniff a Division I offer out of high school because of size and we have plenty of those in Kansas every year. One of those players that is flying under the radar of that Northwest team this season that you may have never heard of statewide is linebacker Jacob Younkman. Younkman, who earned 5A all-state honors and SIK Non-Senior honors last season as a junior, is one of the top linebackers in the Wichita Metro and all of 5A football. He also earned first team all-league in the highly competitive GWAL. While Younkman may not have the Division I recruiting going on like some of his Northwest teammates, he is primed for a huge senior season for the Grizzlies who return six starters on offense and eight on defense.

He also gets it done in strength and conditioning. He features a 4.6 handheld 40, benches 285, squats 255 and cleans 295 entering his senior season.

When we say Northwest talent is off the charts, these next few sentences will prove why. NW returns Division I prospects Zac Daher (DE), Todric McGee (DB), Wetu Kolumu (DB) along with Younkman (LB/OLB) to form what we think may be one of the better defenses in Kansas. Darius Diaz (LB) also had over 50 tackles last season as a sophomore as did junior Michael Anthony. Nate Carter (DT/OL), the brother of former SIK all-state selection Josh Carter, is also back after starting each of the last two seasons and is one of the strongest players in the state as a junior. The offense of Northwest returns Julius Bolden who holds multiple Division I offers and is one of the fastest football players in all of Kansas. Mason Ross, an athlete that can play quarterback, tight end and fullback, is also expected to have a big breakout year for the highly talented Grizzlies who graduated 5A SIK Offensive Player of the Year Reagan Jones. He earned second team all-league at TE last season in an offense loaded with production. Keyvan Stallings was also a second-team all-league pick as a sophomore on the offensive line for NW in 2019. Davin Simms is also expected to have a huge year at reciever and has 4.4 speed.

Northwest defense was highly improved on points allowed last season, in face they only allowed 41 points in the eight regular season games and posted two shutouts. The year before they allowed 167 in the eight regular season games. Northwest allowed 169 all season (82 which came in shootouts combined in last two games of year) while scoring 670. They allowed 381 the year prior while outscoring opponents 726-to-381. Defensive coordinator Marc Marinelli has really elevated the play of the Northwest defense with an offense that has no limits of putting up the best numbers in the state.

Younkman and Northwest have their sights set on the schools first ever state championship this fall but they know 5A won’t be easy in a class that has been dominated by Mill Valley, Bishop Carroll, and Aquinas over the last ten seasons. Is this the year that the Grizzlies capture their first ever state title? Martin has certainly built a consistent state contender at Northwest and we expect a huge season for the Grizzlies. We caught up with Younkman in a preseason Q&A below.

This feature is presented by Neitzel Hardware. Proud to support Jacob Younkman and the Northwest Grizzlies.

I’ve always wanted to play football since the first day I could join. (1st grade)

Be a leader for my team and take home the first state championship in Wichita Northwest history. Play every play like it is my last. To get stronger physically and mentally.

A force to be reckon with. I have heart of gold. If I want something, I do what it takes for it happen.

What’s the atmosphere like to play football on Friday night for your school?

The atmosphere feels like a football movie, everyone is cheering, and we’re dedicated to what we do. My team is my family, we play as one, #WeNotMe

Football teaches me life lessons. It has taught me life skills and continues to teach me skills that I will use for the rest of my life.

Track, mainly to keep me in shape in the offseason.

It feels like another dad, he pushes me to be the best player/person I can be.

We became closer as a team, were only strong as our weakest link.

To play college ball, hopefully with a good scholarship to better educate myself. I haven’t really decided between engineering or business for a degree.

Fishing, lifting weights, and hanging with my friends and family.

A college degree, a stable job, and family.

My favorite subject is MATH, I’m a social butterfly when it comes to meeting and talking to my teachers. 3.6 cumulative GPA

I was born In Pratt, Kansas.

My family means everything to me, they’re the reason I’m in the position I’m in today. The support I get from everyone who knows me is unreal, I couldn’t thank everyone enough. I’m very blessed to have the opportunities I have been given to do. I’m a very determined when it comes to schooling, sports, or just putting a smile on someone’s face.