v Faces in KS: Gavin Meyers - Sports in Kansas 
Warning: include(../includes/bodytag.php): failed to open stream: No such file or directory in /home/kansass/public_html/ks/news/index.php on line 36

Gavin Meyers is one of the top recruits in the state for the Class of 2022 for Hays. (Kim Reel) 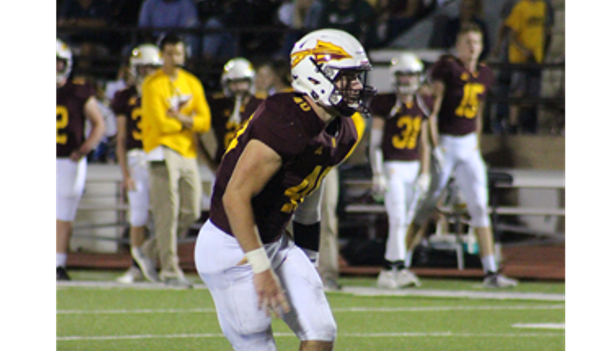 There is a lot of hype for the Hays High School football team heading into the 2020 and for good reason. Several high school football players have been identified as college prospects in the Classes of 2021 and 2022. A big reason for that has been that of junior-to-be linebacker Gavin Meyers and the return of seven starters on offense and eight on defense for the 5A Indians and head coach Tony Crough.

Meyers, who stands 6-foot-2 and weighs 220-pounds, is one of the top recruits in the entire state of Kansas for the class of 2022. He has multiple FBS offers including Colorado, Kansas State, and Nebraska at the next level. Meyers was a first team All-Non Senior All-State pick at linebacker from Sports in Kansas as a sophomore last fall. He has been an immediate impact player at Hays High since he started as a freshman two falls ago.

Meyers isn’t just a football player either. His multiple-sport athletic ability is off the chart and you may not know about it like you should yet because of an injury in wrestling this year and no spring sports due to COVID-19. Meyers took fourth in the state in wrestling as a freshman in 2019 and took third in the state javelin as a freshman in 2019. Meyers is likely the states top multiple sport athlete for the Class of 2022.

Crough and the Indians of Hays have big expectations in 2020 after a 4-6 season that saw a lot of young players get reps in 2019. Like Meyers, Gaven Haselhorst is one of the states top defenders returning and an emerging recruit at defensive end in the Class of 2021. Trey Adams has size at 6-foot-7 that may land him multiple offers this season in the Class of 2021. Jaren Kanak is also a 2022 player that is expected to make a huge impact on both sides of the ball in 2020. Tucker Veach also returns after a second team all-league selection as a defensive back. Quarterback Dylan Dreiling is back and is a Tennessee baseball commit. The Indians will have to replace a few offensive lineman and Shrine Bowl selection Hayden Brown out of the backfield.

While there are big expectations for the Hays program this year it won’t be easy in the loaded 5A classification in Kansas with the likes of Aquinas, Bishop Carroll, Mill Valley and Wichita Northwest. Mill Valley has won three of the last five. Carroll has won three since 2012 and Northwest has two-runner-ups in last two years. Aquinas has played for three titles while winning once since 2014. There are also teams like Goddard and Maize that have made deep playoff runs in recent memory, plus Maize South who returns several key pieces on the West. While the West won’t be easy, Hays will be considered dark a horse in 5A football for 2020 and could be one of the favorites in the WAC.

"This kid jumps off the page with his ability. Hes tough and very physical. Not many kids are immediate impact 3-sport stars as a freshman in high school, heck many aren't that as seniors. More people would know of him had he had a wrestling and track season too. He's really blown up in recruiting this off-season and it should blow up for some of his teammates. It sure looks like to me that they have a lot of pieces to have a really good team at Hays this fall. Several players really jump off the page to me including Gavin and Gaven, plus Jaren Kanak and Trey Adams. 5A football is no joke so it shall be interesting. 4A may have been an easier path for a deep run with it being wide open on the west but Hays should be up for the challenge to hang around with the majority of the teams. The question to me is how good will their offense be and their offensive line. On paper, it sure seems like the defense will be legit. Have my eye on this team for sure this season."

We caught up with Meyers below in the latest Q&A edition of Faces in Kansas.

I started football when I was just a little kid. My older brother played it and that was a big key into why I played.

My goals are to 1, win a state championship, improve myself as a player and get recruited more, and lastly help my team as best as I can.

Of course we do! Anybody can win it in my book. We have a solid team and if we do everything right we definetly have a chance.

I blitz hard and no matter how small the hole is I always try my best to get between it and get a tackle for loss. I also am great at reading the play and which way the ball is being handed off.

It’s fun! In my opinion I think Friday nights are the best part about the school year and the thrill of being on that field with a big crowd around you makes you feel like your unstoppable.

Because we have freak athletes on our team and you don’t wanna miss it.

Everyone on our team is a key player.. We all play as one and we get the job done as one. I don’t think any one position or player  is more important than the other. I could name off freaks on our team and it would be most of the team, because all around our team is a bunch of freaks.

Favorite thing about football is you can knock the crap out of someone and It isn’t illegal.

I play track and I wrestle. Wrestling is probably my favorite sport right after football. The reason being is because it’s just you and your opponent out there and all you can blame is yourself if you mess up. Also, wrestlers are freaks and are the hardest workers in my opinion.

I love my coaches. I’ve loved my coaches since I first started playing tackle football. They always want the best out of us and they will do anything to get us where we want to be in life. With respect, courage, responsibility and so on. My high school coaches I have a great time with on and off the field. I feel like their always there when I need to let them know about something and they are all really supportive to when it comes to what I need to do to succeed.

My friends and I ran hills and lifted almost everyday.  I mean You need to if you want to be the best.

I’m seeing quite a bit of interest from the power five level and it’s a great feeling. My plans are to pursue my career in football and get as far as I can in the sport.

Working out and playing video games with the bro’s.

I see myself on an NFL field pursuing my dream of being in the NFL.

I don’t really have a favorite subject, but my best subject is math. I’m in al the honors classes and my GPA fluctuates around 3.5-3.7 year round.

My role model is my oldest brother. I remember growing up and trying to put best him and impress him in every aspect of life especially sports. He always helped me in sports and coached me up on what I needed to do in that sport. I don’t wanna brag, but my brother was kind of a top dog in high school, a freak of nature as you would say. I always hear stories about how he was such a hard worker from past coaches and he’d do anything to make himself the best out on that field. And for him being 5’10 180 as a linebacker in highschool, he didn’t let anything get in his way for his size. He set the record for most tackles in his career at Hays High and my goal is to beat that record by the time I graduate.

Best place to eat in town is definitely the Q. Best burgers and queso fries around. Especially if you get the widow maker which is two burger drenched with queso fries.

I try to prove people wrong. I don’t like haters and I never will.