v Seniors in Kansas: Isaiah Armstrong - Sports in Kansas 
Warning: include(../includes/bodytag.php): failed to open stream: No such file or directory in /home/kansass/public_html/ks/news/index.php on line 36 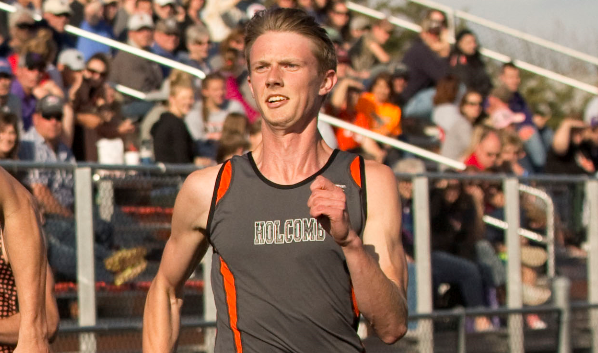 Isaiah Armstrong may be one of the best track and field athletes in the state that you don’t know a lot about across the state of Kansas. You may ask why is that? Isaiah hasn’t competed in track and field at the very well-known and famous state meet in Wichita that features all classes of Kansas since his sophomore year of 2018 after being injured near the end of last season at regionals. He's had some very unfortunate things happen to derail his high school track and field career.

What we do know about Armstrong is that he was one of the best in Kansas as a sophomore in 2018 and took second in the 400 meters at the 4A state meet in Wichita with a 49.9 ran at Cessna Stadium just off his season best of 49.0 earlier that year. Last season, Armstrong ran in the 48s with a 48.4 at the GWAC meet last May as well as a 22.2 in the 200 meters. His season came to a heartbreaking end when he had a hamstring injury during a relay at last years regional meet. Armstrong likely would've came home with some serious hardware and a state title.

Armstrong was really looking forward to becoming a state champion this season and to be competing at the state meet before his final senior season of track and field was cancelled because of Covid-19 last month. Armstrong is feeling the same all Kansas athletes are feeling but for him it probably hits a bit harder as he hasn’t competed at state in two years. Armstrong had dreams of reaching the 47s this season for Holcomb head coach Kent Teeter, a former state champion and 400-meter record state record holder at Lyons HS in 1979.

"It has really devastated our athletes.  Our numbers increased a little from last year and we had a lot of goals for this upcoming season.  We had a great group of seniors and after two weeks of practice things were going really well. I feel really bad for Isaiah, I think he had a real shot to run in the 21s and 47s this season." Teeter said.

The good news for this senior in Western Kansas is that his talent was identified early in his career resulting in several Division I programs recruiting him. Armstrong will compete for the Shockers of Wichita State next fall so 2018 won’t be his last time competing at Wichita State although it could have a new look with the approval made of Cessna Stadium being torn down.

Track and Field also runs in his blood, his father Isaac was a state champion high jumper at Syracuse High School. Syracuse is located in the mountain time zone in extreme southwest Kansas by the Colorado border 45 minutes east of Holcomb.

While Armstrong will never become a state champion we know the potential and he hasn't stopped working to reach his goals as he prepares for the Division I level next season.

We caught up with the outstanding senior sprinter below in the latest Q&A edition of Faces in Kansas.

Seniors in Kansas is presented by American Implement. Proud to support high school sports coverage in Kansas with Sports in Kansas.

I started playing sports at a young age and my dad influenced me because he was really into sports most his life.

My goals this season were to get better and faster, and win four gold medals at the state track meet.

I think I was blessed with some athletic genes but I also put a lot of work in on the track to get me to where I am.

I think playing multiple sports has made me an all around better athlete.

I was pretty shocked at first and it didn’t fully hit me until a little later. I was devastated and I would’ve never thought this is how things would’ve turned out.

Now I’m training the same as I would if there still was a track season and I’m preparing for the fall.

Holcomb was a great atmosphere to play sports in. I was always surrounded by great coaches, and always got a huge amount of support from the community.

Who were other key athletes on your team(s)?

Zephyn Mason was definitely a key guy on the track team and he’s only gotten better. He long jumped 22 something as a sophomore and he would’ve contributed greatly to our relays this year. Zion Mason, Zephyn’s brother, was a senior last year and he helped out the 4x1 and 4x4 last year greatly. Edgar Ramirez also stepped up and played a big role on the 4x4 last year also. Justin Ortega was also definitely going to be one of the fastest on the teams this year.

Getting better and spending time with my team.​

I’ve had great coaches my whole 4 years at Holcomb High​ School and they’ve helped me get to where I am now. I’m thankful for every one of them and wouldn’t trade them for the world.

I’ve spent more time than I can count to better myself​ for track and field physically and mentally.

I am attending Wichita State University in the fall and I’m running track there.

Camping and spending time with friends and family.

In 10 years I see myself graduated from college with a good career and still running.

My favorite subject in school is sciences and I’m pretty quiet in school and got pretty good grades. My GPA before we stopped in school learning was around a 3.6.

I have so many great role models that I look up to just in my family. My dad, my grandfathers, and all of my uncles.

Don’t take the rest of your high school years for granted.