v Nex-Tech Wireless Athlete of the Month: Brady Dinkel - Sports in Kansas 
Warning: include(../includes/bodytag.php): failed to open stream: No such file or directory in /home/kansass/public_html/ks/news/index.php on line 36

Dinkel has had quite the career for St. Francis. 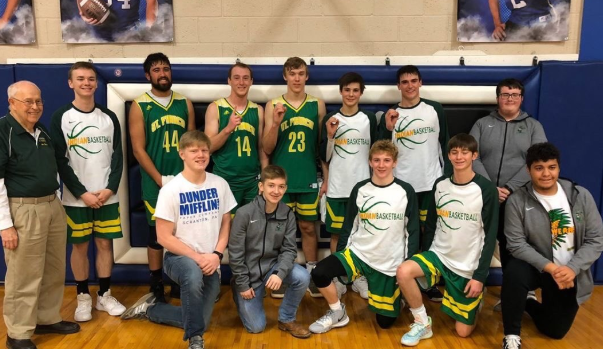 This months Nex-Tech Wireless Athlete of the Month is no stranger to the spotlight as Brady Dinkel has been a huge part of the St. Francis success in multiple sports over the last four years.

St. Francis - From his first football game on Sept. 2, 2016 to his last basketball contest on March 11, 2020, St. Francis’ Brady Dinkel was a constant for the Indians.

Dinkel was on the two best SF football teams in school history and the top basketball squad. He also helped track to a fifth-place team finish in ’18.

Dinkel, the team’s first Shrine Bowler in a decade, was part of high number of memorable wins, including his first and last victories in an Indian uniform.

On March 7, St. Francis faced Sylvan-Lucas in the Class 1A sub-state title game at Trego Community High School. St. Francis was decimated by sickness from Jan. 15 to sub-state.

S-L opened with a 21-3 run. Dinkel, a career 1,000-point scorer who averaged 18 points a game this winter, led the comeback. He was the only senior in the rotation.

In the third quarter, he sunk a 3-pointer to tie the contest at 23. SF led 39-36 midway through the fourth quarter. In a timeout with 4 minutes, 7 seconds left, coach Busse told Dinkel: “We are going to win this game.”

Then, Dinkel delivered his last defining moment as an Indian when he sunk a trey from just inside the volleyball spike line on the right side. Dinkel kept his shooting arm raised in celebration after the ball went through. He looked over at his coach.

The shot was SF’s last field goal of the game. St. Francis eventually won 48-40 and qualified for the state tournament for just the third time in school history. SF also qualified in ’97 and ’17.

“Brady was the one,” coach Busse said. “We had a ton of big plays. Big rebounds that nobody will remember that we had to have, and some big, big plays. But that one we needed.”

St. Francis lost, 65-46, to Little River in the first round of state on March 11 and completed a 17-7 season. After the next day’s games, KSHSAA called off the rest of the state tournament because of coronavirus concerns. The spring season was eventually cancelled, too.

Dinkel, like many seniors across the state, was not able to finish his high school career. He had qualified in the last two state track meets and helped a big improvement with the Indians.

In his first game, Dinkel was the backup quarterback and defensive back in a wild 22-20 home victory against Wallace County-Sharon Springs to start the ’16 season. Entering the contest, SF was ranked first in Eight-Man, Division I, and Wallace County third in Division II.

St. Francis delivered a long touchdown run off a wildcat play and scored again before halftime on a successful Hail Mary. SF tallied a safety, and WC had a key pick-six. Wallace County believed it tied the score late, but a two-point conversion was nullified because of penalty.

The game ended when then-SF quarterback Quinton Cravens, instead of punting and risking a blocked kick, took the fourth down snap, found a seam and ran off the final 6.8 seconds.

The 6-foot-2, 180-pound Dinkel, who started throughout the fall at defensive back, was one of four freshmen on the roster. Aaron White, Seth Hilt and Jaron Bering were the other three. At the time, Rodney Yates was SF’s head football coach and Nick O’Loughlin head track coach.

Wallace County was a longtime powerhouse with Jeff Hennick and Kevin Ayers as coaches. Tate Busse, Coach Busse’s son and Ben Busse’s brother, was a starting junior end for the Indians.

That fall, St. Francis finished 11-1 and lost to Osborne in the Eight-Man, Division I state title game. In the winter, Dinkel and Isaiah Lee were the only freshmen for an Indian squad that finished fourth in Class 1A, Division I, the best state basketball finish in school annals.

At least by last summer, all the key players and coaches from the ’16 game had graduated or moved on. Yates went to Cambridge, Neb. after the ’17 season. Nick Fawcett came to SF and installed the single wing.

Dinkel, though, was a stalwart throughout the changes. He started at quarterback and defensive back the last three years. In ’18, helped lead SF to an 11-1 season and sub-state runner-up. Last year, Dinkel, Bering and move-in Jayce Nider were the only Indian seniors. Bering was a reserve. Dinkel was substantially the team’s most experienced player.

After he accounted for 26 touchdowns on offense and three interceptions on defense as a junior, Dinkel enjoyed a terrific senior season. He rushed for 1,789 yards and accounted for 36 offensive TDs. Defensively, he recorded 61 tackles, seven INTs and four defensive touchdowns.

Dinkel was Eight-Man, Division I Sports in Kansas co-Defensive Player of the Year. St. Francis lost to Canton-Galva in the state title game, though went 12-1 and set a school mark for single season victories. Dinkel became the Indians’ first Shrine Bowler since running back Trent Raile in 2010.