v Seniors in KS: Kyler Haffner - Sports in Kansas 
Warning: include(../includes/bodytag.php): failed to open stream: No such file or directory in /home/kansass/public_html/ks/news/index.php on line 36

Kyler Haffner was an all-state pick in 1A this season. (Brooke Buck Photography) 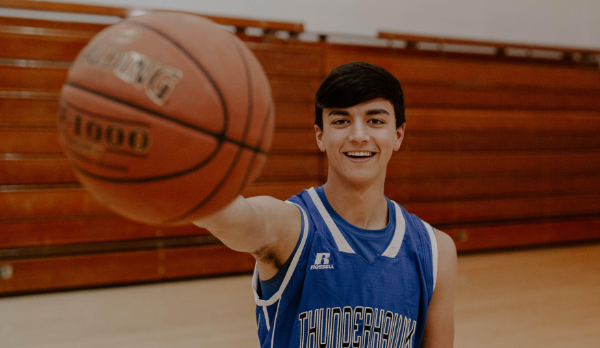 At Sports in Kansas it is our obligation to highlight several senior student athletes across the state of Kansas over the next few months for their dedication, hard work and accomplishments in their high school career. In this edition we go to Grainfield, Kansas. (To nominate a senior: send bio/why to: sportsinkansas@gmail.com)

Kyler Haffner has been one of the most consistent small school 1A basketball players in Kansas over the last four seasons. Haffner plays for the Wheatland/Grinnell Thunderhawks, a co-op made up of both Wheatland High School and Grinnell High School. Wheatland High School, where Haffner goes to, is located in Grainfield while Grinnell is located in Grinnell. Grainfield has a population of 253 while there are 237 people in Grinnell. For those wanting to know on a map, Grainfield is about 21 miles west of Oakley on I-70 in Western Kansas. It's in the parts of Kansas where you can drive on non-highways and maybe pass one car over the period of an hour. Sports are a big thing in small towns anywhere but even a bigger thing in the small towns of Western Kansas where its sports and agriculture.

The senior from Wheatland High School in Grainfield, who plays as Grainfield-Wheatland/Grinnell, has averaged at least 6.5 points per game since his freshman year. He has averaged in double-figure points over the last three basketball season as a point guard. As a senior he put up some of the most complete numbers in the state for his 15-6 squad led by head coach Will Bixenmann. Haffner averaged 14.5 ppg, 7.1 apg, 6.0 rpg and 4.3 spg. He was an all-state pick in 1A this season by Sports in Kansas and has made the Western Kansas Liberty League first team three years in a row.

Haffner isn't just a basketball player either as has also competes in golf in the spring and has been a state participant in his career. Haffner had his senior year cut short this year, not due to the Coronavirus, but to Influenza B. He had to sit out in regional basketball as his team would be the number one seed in the bracket. An unexpected loss in the game ended the what could have been for the W-G basketball team and Haffner's career. While many seniors lost their state run due to Covid-19, W-G experienced that of some sort before it happened to eveyone else. It was heartbreak for the senior and his team, what many are experiencing in spring sports across the country right now. Haffner is also affected by that as he will miss his spring sports season his senior year. Graduation is in limbo, no prom, and no sports. Crushing for a senior student athlete.

Hafner is also a model student with a 3.4 GPA and he plans to go to Kansas State University in the fall and major in business. Sports are done for him as far as an athlete at the next level but he will cherish the memories he was able to make while playing four years for W-G.

So what now for Haffner? He was striving to get a state medal in golf this season and become an all-state pick in the sport but now there won't be any spring season due to the virus. Haffner is hoping at some point he can play in a couple of the all-star basketball games that he was selected to but that is still up in the air.

So what is it like for a senior going through all of this? We caught up with himwith the small town standout below in the latest edition of "Seniors in Kansas." Seniors in Kansas are presented by American Implement. Proud to support high school sports in the state of Kansas with Sports in Kansas.

How did you get involved in sports? I got involved in sports at a very young age. I have many friends that were 2 to 3 years older than me and also played sports. Them always being better and bigger pushed me to work harder to compete with them.

What were your goals this season? My goals this season were to win our League Tournament and make it to State Basketball. Setting goals have always made my teammates and I work harder. It is great to see goals accomplished and realize your hard work payed off.

What makes you such a force as an athlete? What makes me a force of an athlete is my quickness and vison on the basketball court. I have a quick first step that helps me get past defenders. Also, I see the court very well to pass my teammates the ball.

What’s it like to play multiple sports? It is great but takes a lot of dedication and time. Especially in a small school, where everyone plays all sports. You get to compete with the same guys through every sport. It creates bonds that last a lifetime.

Explain the heartbreak it was like to hear that the senior season in sports is cut short? My senior sports year has been very unreal. The week of Regional basketball I had gotten Influenza B. I have always played through sickness but, I had to sit out the first game to prevent spreading it to my teammates. Being ranked 1st in our regionals, I was very confident in my team’s ability to win. However, an unexpected loss ended my teams’ season. It was tough watching them and wishing I could help them push through to get the win. Not being able to play in a last high school basketball game was devastating for myself and family. You never want your high school career to end like that but, it has ended badly for many seniors across the state this year. My ultimate goal in high school was to get one state medal. After basketball ending, I was striving for a state medal in golf or track. However, those dreams were shattered when they cancelled all spring athletics for a good reason. During the summer, I had been taking golf lessons once a week to improve my game. I was very excited to see how much I had improved from last season. It is sad to see so much hard work for nothing. Yet, I know cancelling the spring sports season was the correct decision.

What now? I am still hoping that I get to play in two basketball all star games. They have postponed them hoping to reschedule a later time. I especially want to play in the Northwest Kansas All-Star Basketball Classic because, my high school coach (Will Bixenman) will be coaching me in it. It would be great to play under him one last time.

What is your best sport? My best sport is basketball. i feel I would have been a competitive golfer if I had starter prior to my freshman year.

What’s the atmosphere like to play for your school and town? The support from the community has always been great. Wheatland has a history of successful sports programs. This success has a lot to do with the crowds that follow the teams to cheer them on. The fans are very dedicated to traveling to games even if they are over and hour away which is very common. The atmosphere to play in our home gym is great. The gym is special to me because both of my parents also played their high school careers there.

Who were other key players on your team(s)? The other key players on my team were Trevor Zarybnicky and Trey Vincent. Yet, everyone played a key role in our teams’ success through the season. We were a very young team with only one senior in me. They should have a great season next year also!

Favorite thing about sports you play? My favorite thing is being able to compete, make memories and build friendships that last forever. There is no doubt that in ten years we will all still be great friends with great memories through sports.

What is it like to play for your coaches? My freshman year in basketball I was coached by Brendan Ptacek. He is a great coach and person that knows the game very well. Sadly, his family moved away after the school year. He is still a great friend in which I talk to and get advice from. After he left, I was very worried who would take his spot. Will Bixenman filled his spot and has continued the program’s success. I couldn’t have asked for a better coach and role model. I have gotten very close to him this year by student aiding for him in two classes during school. At the start of my senior basketball season I had struggled shooting the ball. Yet, he still trusted me and had confidence in me. He is and will continue to be a great coach with a bright future for the program.

How much preparation had you put into sports? I had put in lots of time in sports, especially basketball. From a young age, I was always bouncing a basketball around the house or shooting on my outside goal. This continued into middle school and during the summer I played on a travel team before my 8th grade year. I had also gone to many different basketball camps growing up. Before my sophomore year, I played for Western Kansas Elite in the summer. Playing for them was great and I learned a lot from the coaches. I had also been training once a week to improve my game. As you can see, I put in a lot of dedication and time into basketball.

What interest are you seeing at the next level and what are your plans? I don’t have any desire to play in college. Instead, I will go to Kansas State and major in General Business. Yet, I plan to play on an Intramural basketball team with my friends.

Where do you see yourself in 10 years? In ten years, I see myself working at a Bank in the Kansas City area and starting a family.

Who is your role model? My role models are my parents. They have worked very hard throughout their life to get where they are.

What would you say to the underclassmen out there right now reading this? Never take for granted how lucky you are to be playing a sport. You always hear play every game like it’s your last. I never thought my last high school golf meet would have been my Junior year but that’s how it went. Always cherish those moments and never take for granted how easily it can be taken from you.

One thing the average person wouldn’t know about you? In 3rd grade, I got to be a ball boy at a Kansas basketball game at Allen Fieldhouse.

Anything else to add? I started playing recreational basketball in 3rd grade. You normally start playing when you are in 4th grade.