v Zach Bloch of Seabury tabbed Sports in Kansas 2A POY - Sports in Kansas 
Warning: include(../includes/bodytag.php): failed to open stream: No such file or directory in /home/kansass/public_html/ks/news/index.php on line 36

Zach Bloch of Seabury tabbed Sports in Kansas 2A POY 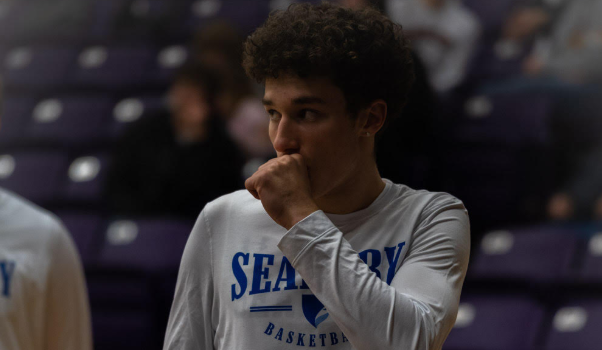 2020 2A Sports in Kansas Boys Player of the Year

Last year, Bloch was the only sophomore named 2A first team all-state by the Kansas Basketball Coaches Association. Bishop Seabury lost in the first round of the state tournament last winter in an OT defeat to eventual champion Ness City. This year, Seabury was ranked first in 2A all winter and was the consensus favorite to win 2A before the tournament was cancelled.

The 6-foot-1 Bloch, known for unselfish play, led the team with 17.7 points per game. He also paced the Seahawks with 5.4 assists and 3.7 steals and was second on the squad with six rebounds a game. Bloch shot 55 percent on 2-point shots and 42 percent on 3s. Bloch paced Seabury with 27 points (12 of 15 shooting), along with eight assists, five steals and four rebounds in the 72-45 state quarterfinal win versus Valley Heights.

Seabury finished the season at 22-2, the most wins among the remaining 2A final four squads. The Seahawks, with 2A Coach of the Year Jonathan Raney, set school records for single seasons wins (22), victories in a row (15), average margin of victory (plus-32 per game), points per contest (71.2) and total points scored (1,711). Bloch, with 1,045 career points, will begin his third year of AAU basketball with KC Run GMC. He has had interest from Division Is Utah State, University of Nebraska-Omaha and University of Illinois-Chicago.

What many not be aware of is that Zach nearly didn't have a 2019-20 high school campaign as after his AAU season with KC Run GMC ended it was found he had been playing on a fracture in his femur (previously misdiagnosed as tendonitis).  Rehab went from early August to mid December and he had only one game in late December.  The second practice back after the new year he severely sprained his ankle and basically played on one leg most of January.  He was really just hitting his full stride as the season wound down and then the unfortunate loss of the remainder of State occurred. Incredible season for Bloch.

Bishop Seabury Academy would like to congratulate Junior Zach Bloch on being named the 2A Player of the Year for 2020!  You are a star on and off the court and we could not be more proud of you!  Your leadership, hard work and “team first” attitude truly make you special!
Congrats to Zach Bloch on his 2A 2020 POY selection from Sports in Kansas. We're proud of your hard work and accomplishments, from your friends at Official Sports. Stay hungry, go Seahawks!
Congrats to Zach Bloch for being named 2020 2A Player of the Year from Sports in Kansas. From Cereset Overland Park, supporters of Bishop Seabury Academy basketball. Cereset helps your brain help you.
--