v Sterling Chapman of Campus named 6A SIK POY - Sports in Kansas 
Warning: include(../includes/bodytag.php): failed to open stream: No such file or directory in /home/kansass/public_html/ks/news/index.php on line 36 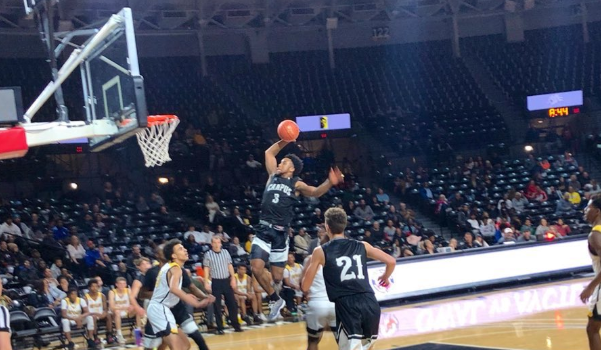 2020 6A Sports in Kansas Boys Player of the Year

The 6-foot-4 Chapman led Campus to a 23-0 record and the No. 1 seed in Class 6A. Campus was ranked first in 6A the majority of the year. The Colts and Blue Valley Northwest, on opposite side of the bracket, were considered the Class 6A favorites. Campus reached state for the first time since 1996. Chapman led a dominant group and earned AVCTL Division I MVP honors. Sterling led the team with 17.2 points, and also finished with 6.8 rebounds, 3.2 assists and 2.5 steals a contest. The top-five players, including Sterling’s brother, Steele, all averaged at least 8.5 points and 3.9 rebounds. Steele has signed with Southwestern College.

Campus finished 12-0 in league play and beat second-place Derby three times, including in the sub-state title game. The Colts had an average score of 72-52. This marked the first AVCTL I title for Campus, which has enjoyed a huge turnaround since it joined the league in 2010-11. In the state quarterfinals, Sterling delivered 26 points, seven rebounds, four assists and three steals in the state quarterfinal win versus Manhattan. Campus also beat state power Bishop Miege in the Dodge City TOC this winter.

Shawn Warrior, Tai Johnson, Steele Chapman and Thomas King were all key seniors, while Sterling and Keither Florence (6-7, 197) were juniors.

Campus High School and USD 261 Haysville would like to congratulate the boys basketball team on an undefeated season. Congratulations to Sterling Chapman on the 6A Player of the Year from Sports in Kansas. We are proud of you!