v Ehlaina Hartman of Spearville named SIK 2A POY - Sports in Kansas 
Warning: include(../includes/bodytag.php): failed to open stream: No such file or directory in /home/kansass/public_html/ks/news/index.php on line 36 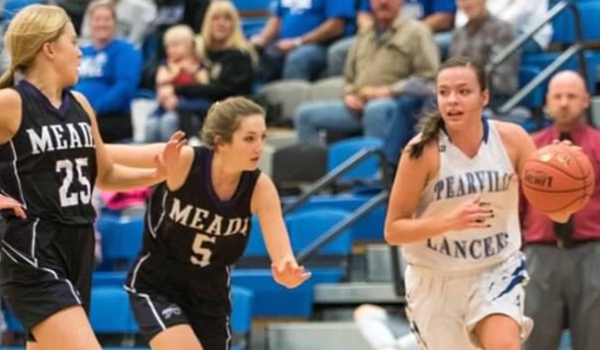 2020 Girls 2A Sports in Kansas Girls Player of the Year

The 6-foot Hartman enjoyed a tremendous sports season. In the fall, she was 2A player of the year by the Kansas Volleyball Coaches Association. Spearville finished as state runner-up to Alma-Wabaunsee. This winter, she led the Lancers to a 24-0 record and final four showing in Class 2A. Spearville moved from 1A to 2A and opened the year tenth in the rankings before steadily moving up. The speedy, athletic Hartman finished with 21.4 points, six rebounds, 3.2 steals and 2.4 assists a contest. She was very efficient shooting with 50 percent from the field, 35 from the 3-point range and 75 percent from the foul line.

Hartman finished fourth in all classes of Kansas in scoring. Notably, Hartman scored 37 points on 14 of 24 shooting in a 77-52 sub-state title game win at Elkhart. In the first round of state, Hartman had 25 points in a 55-41 victory versus Pittsburg Colgan. An Emporia State signee, the left-handed Hartman averaged 17 points and 6.4 rebounds in her career and tallied 1,379 total points. Hartman also earned back-to-back MVP honors at the Gene Keady Classic in Larned and won the 3-point contest at the Keady Classic this winter. Additionally, Spearville captured the SPIAA conference tournament title after an upset quarterfinal loss last season.

Wheat State Elite would like to congratulate Ehlaina Hartman on being the 2020 Sports in Kansas 2A Player of the Year. We are proud of you. WSE and owner Dylan Evans are proud supporters of high school girls basketball in Kansas.

Spearville High School would like to congratulate this years team on their incredible season. Also congrats to Ehlaina Hartman on POY honors from Sports in Kansas. We are very proud of you!