v Scheer repeats as Sports in Kansas 3A Player of Year - Sports in Kansas 
Warning: include(../includes/bodytag.php): failed to open stream: No such file or directory in /home/kansass/public_html/ks/news/index.php on line 36

Scheer repeats as Sports in Kansas 3A Player of Year

Kylee Scheer of Cheney repeats as POY in 3A. (photo: Jean Nance) 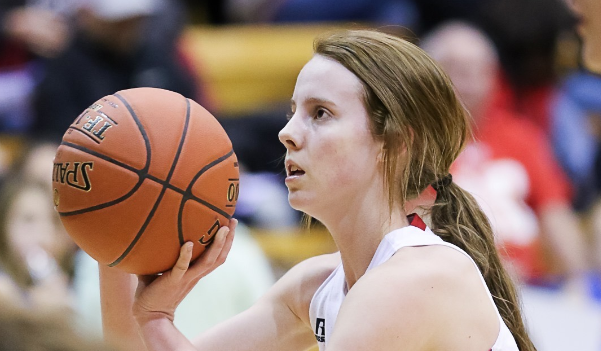 2020 Girls 3A Sports in Kansas Girls Player of the Year

Scheer, an Emporia State commit, repeated as 3A Player of the Year in a class with more parity of players than any other class. After a state runner-up showing in 2019, Cheney finished 21-3 and again advanced to the 3A Final Four before the tournament was cancelled. Scheer was part of a Cardinal squad that had all but 14 of its points from non-seniors. She averaged 23.9 points, five rebounds, 3.7 steals and 1.7 assists per game. Scheer finished third in Kansas in scoring. She shot 51 percent from the field, 71 percent from the foul line and made 73 of 209 treys (35 percent).She had six games this year over 30 points.

Scheer led her team in points, rebounds and steals. No other Cardinal averaged more than 7.1 points per game, though senior Lexi Cline was one of the Kansas’ top assist leaders at 4.1 a contest. All three of Cheney’s losses came again squads that reached state, two that qualified for the final four. The defeats were by a collective seven points.

The 5-foot-8 Scheer scored 17 and 21 points in a pair of wins versus league rival Garden Plain, a 2A final four squad. Scheer delivered three big games to finish the year: 30 points versus Trinity Academy, and then 22 versus Eureka and legendary coach Shelly Hoyt. In the first round of state, Scheer shot 8 of 16 from the field for 19 points in a 66-53 win versus Phillipsburg and standout freshman Taryn Sides. Scheer had both seven rebounds in the Eureka and Phillipsburg victories.

In her career, Scheer has averaged 17.5 points, 3.9 rebounds and 3.1 steals a game with 1,222 career points. She has 162 career treys. Kylee again played for her dad, Rod, the longtime Cheney girls’ coach.

Wheat State Elite would like to congratulate Kylee Scheer on being the 2020 Sports in Kansas 3A Player of the Year. We are proud of you. WSE and owner Dylan Evans are proud supporters of high school girls basketball in Kansas.

Congrats to Kylee Scheer on the 2020 SIK 3A POY. We are very proud of you! - From all of your Family!