v Horyna, Mullens of Liberal take home 6A SIK honors - Sports in Kansas 
Warning: include(../includes/bodytag.php): failed to open stream: No such file or directory in /home/kansass/public_html/ks/news/index.php on line 36

Katie Horyna of Libera and Machia Mullens of Liberal named Sports in Kansas 6A POY for 2020. 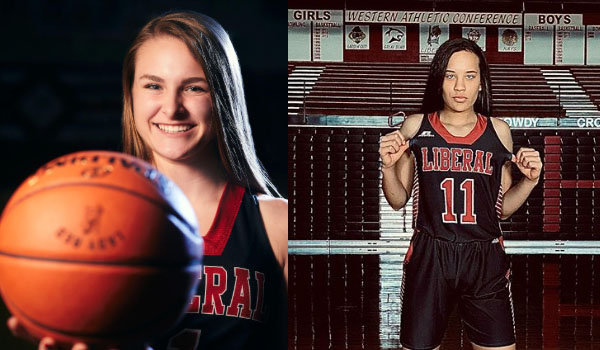 2020 Girls 6A Sports in Kansas Girls Player of the Year

Perhaps no 1-2 combination on the same team was more well-known than Liberal seniors Katie Horyna and Machia Mullens. The 5-foot-9 Horyna, the Western Athletic Conference Player of the Year and Liberal’s point guard, has signed with Division I Abilene Christian. Mullens, a 6-foot starting post, has inked with Division I Kansas City, which earned a trip to the NCAA tournament for the first time in school history this winter. Mullens and Horyna finished first and second, respectively, in Redskin history in scoring. Mullens tallied 1,155 points, along with 652 rebounds and 195 blocks. Horyna scored 1,012 career points, 256 assists and 177 steals. Liberal won four straight WAC titles, achieved an 85-8 career record and 68-3 in the last three years.

The Liberal High School Booster Club would like to congratulate the Liberal HS girls basketball team on an outstanding season. Congrats to all of our players honored by Sports in Kansas. We are proud of you!