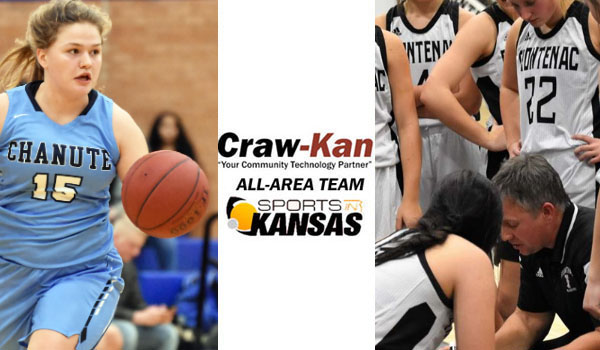 Babcock led class 4A in scoring this year with 19.5 points per game along with 5 assists, 5.5 rebounds per game and 3.5 steals per game. Babcock hit 66 three-pointers this season. She will be one of the top returning 4A players in the state next season and is a finalist for 4A Sports in Kansas Player of the Year.

Fields took an 8-13 Frontenac Raider girls’ team from 2018-2019 and turned them into a team that went 22-2 in 2019-2020 that didn’t lose to a Kansas team all season. Fields, a former all-state multiple sport athlete at Frontenac in the Class of 1994, led the Raiders to the 3A Final Four before the season being cancelled by KSHSAA. It was the first Final Four appearance since 2014 (4A-II) and the first for the Raiders in 3A since 2004. What’s most impressive about the Raiders this season is the number of girls that saw the court, going at least 10+ deep with production from all four grades. Fields is also an assistant coach on the 3A state champion Frontenac Softball Team last season. Fields is also a Finalist for the Sports in Kansas 3A Coach of the Year.