v A Sisters Love: Emily & Janae Ryan - Sports in Kansas 
Warning: include(../includes/bodytag.php): failed to open stream: No such file or directory in /home/kansass/public_html/ks/news/index.php on line 36

Emily and Janae Ryan pictured after a state tournament earlier in Emily's career. 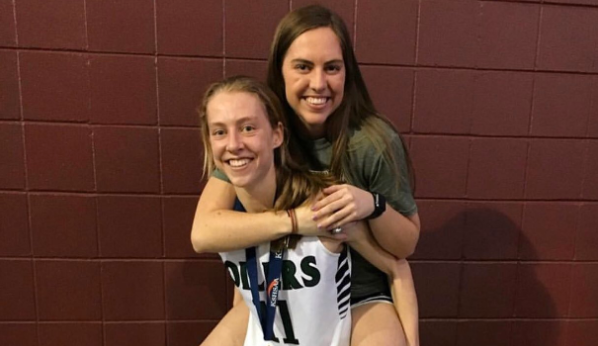 By CONOR NICHOLL for Sports in Kansas - contact info: Cnicholl1@gmail.com

DODGE CITY – Janae Ryan is three years older than her sister, Emily. The two have shared a bedroom since Emily was born. Janae had a stellar career at Claflin-Central Plains, notably in basketball and tennis. Janae was a senior and Emily a freshman when CP captured the Class 2A state basketball title in ’17. Janae averaged 16 points a game, while Emily delivered 22 a contest.

“We have done everything together since she was born basically, so we have grown up completely together,” Janae said. “I think that’s why we are best friends and will probably continue to be.”

Janae has long supported her sister, including during trying times, such as this weekend’s unique situation following the cancellation of the semifinals and finals of the Kansas state basketball tournaments because of the coronavirus.

Janae has organized a petition that the state tournament should be postponed and not cancelled. As of 12:02 AM Sunday morning, it had received more than 14,900 signatures.

In ’17, Janae played in the statewide Kansas Basketball Coaches Association all-star game as one of the top 12 seniors for the West squad. She went to Sterling College, 39 minutes from Claflin. Janae is currently a junior and plays on the Warrior tennis team. Janae and her brothers, Michael and Devin, enjoyed great success with the Oilers and collected multiple state championships.

They have seen Emily became one of the best players in Sunflower State history through a blend of talent, work ethic and leadership that’s rare among high school players. Janae watched all but two of her sister’s games in person this winter. The other ones she saw online.

Janae asked Sterling for permission to miss class Thursday and Friday to watch the Class 1A state tournament at Dodge City’s United Wireless Arena, expected to be the last three games of her sister’s high school career before she heads to Iowa State.

She went home Thursday morning, and then traveled to DC. Janae and CP saw the Oilers beat Ingalls, 93-47, in the quarterfinals, a day that ultimately ran the emotional gauntlet. After the game, Emily and her teammates took pictures with a poster that commemorated her 3,000th career point, the third player in state annals to reach the milestone.

Ryan reached the mark on a second-quarter play that encapsulated Central Plains’ success: on-the-ball defense forced a missed shot, sophomore Kassidy Nixon grabbed the rebound, and eventually found Ryan on a great pass ahead of the defense for a layup.

During the following game between Otis-Bison/Hanover, KSHSAA ruled the rest of the state tournament was cancelled because of COVID-19, commonly known as the coronavirus.

“It’s always been a big priority of mine,” Janae said after the quarterfinal victory, but before the tournament was cancelled. “I only get so many chances to watch her play, especially with now that she is going to Ames.”

This followed the cancellation/suspension of international and U.S. sports leagues, including NCAA March Madness. KSHSAA’s choice was made once Kansas was declared “a state of emergency” by government officials.

The state semifinals and championship games, scheduled for Friday and Saturday, were not played. Emily and her teammates, like many players around the state, were immediately devastated. Normally composed, Emily couldn’t hold back the tears as she left UWA.

This marked the first time since the official state tournament started in 1912 that Kansas will not complete the state basketball tournament. Perhaps no group has been more displeased than those representing the 1A schools.

“Heartbreaking way for your career to end tonight, but this will NEVER take away from all you have accomplished and will continue to accomplish,” Janae posted later on Twitter. “Congrats on 3,000…I am unbelievably proud of you always! @ryan_emily11.”

Janae has organized the online petition with hashtags #PostponeNotCancel and #ForTheKids. The Nebraska state high school basketball tournament did conclude this weekend. As well, Janae posted on Facebook.

“There are no words to describe the heartbreak I am feeling for Emily and all the players right now,” she wrote. “But wow, what an incredible seven-year journey it has been. I am so thankful to have been a part of this unbelievable run and even more thankful for all the lifelong memories that Central Plains basketball has given me.”

After Thursday, Emily and the senior class had never lost a high school game and finished the year 26-0, including a regional bye. Central Plains remained at six consecutive state titles. The Oilers’ winning streak is at 136, the longest in state annals and the best nationally in 67 years.

In her last game, Emily delivered 20 points on 9 of 13 shooting, along with six steals and five assists. She completed her career with 3,007 points, 599 steals and 703 assists. Ryan broke the state all-time steals record of 543 set by Sublette’s Shalee Lehning from 2002-05.

“You take leadership skills, you take her defense, her offensive skills, her unselfishness,” coach Pat Stiles said. “She is the best.”

Ryan finished third on the all-time scoring list. Jackie Stiles, Claflin graduate, is first all-time at 3,603, and Moundridge’s Laurie Koehn is second at 3,160. Stiles, currently a University of Oklahoma women’s assistant, is coach Stiles’ daughter. Olpe coach Jesse Nelson, in his 43rd year with the Eagles, coached against Stiles and Koehn and watched Ryan play.

“She can do so many things, too,” Nelson said of Ryan. “She can go score. She can score probably about whatever she wants, but she can make her teammates score, too. She is just another one of Kansas’ best right there, best all-time. You don’t get to see great players like her very often, and Jackie was the same way.”

Emily, though, paid little attention to the individual records – leadership that Janae called “beyond her years.”

“The number that matters the most to me is the score,” Emily said. “Our score. It’s just whatever it takes, score more than the other team.”

Additionally, Central Plains set state records for average margin of victory (plus-49.2) and points allowed per game (24.5) last year. This winter, the Oilers broke both of those marks with an average score of 78.1-21.2, according to their MaxPreps page.

CP had an average margin of 56.9 points per game. MaxPreps ranks the Oilers No. 2 for all classes in Kansas, behind 4A Bishop Miege. Central Plains started four seniors: Emily, Delaney Rugan, Addison Crites and Rachel Lamatsch.

Crites was 1A Volleyball Player of the Year as CP won the volleyball title. She will play volleyball at Barton CC. Zoe Potter was a key senior reserve. Janae and coach Stiles have both said they noticed the current seniors’ potential as freshmen.

“I knew they were special,” Janae said. “I mean, they competed against us every single day. They didn’t back down, and there was just a fire in their eyes, even when they were freshmen, and I liked to think that we helped them gain the leadership skills, buy into the program of team first all the time, and they have done that so much better than we could ever imagine doing that, so it’s cool seeing them as seniors and being so successful, it’s super fun.”