v Sports in Kansas: 2020 Basketball Tourney Recap - Sports in Kansas 
Warning: include(../includes/bodytag.php): failed to open stream: No such file or directory in /home/kansass/public_html/ks/news/index.php on line 36 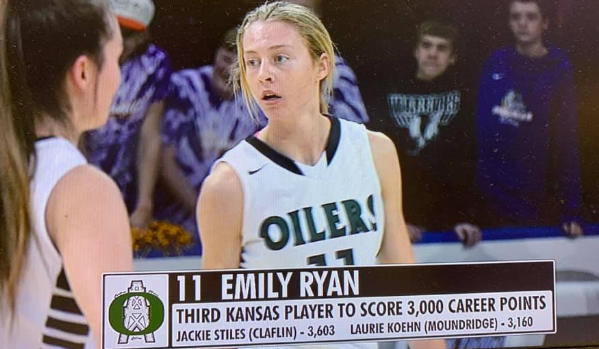 Three years ago, Olpe lost, 50-47, to Hanover in the Class 1A, Division I state championship game at Fort Hays State. Hanover’s Tianna Lohse made a 3-pointer at the buzzer. Olpe had senior point guard Colleen Smith, along with the Davis sisters: senior Frankie and freshman Neleh. The Davis’ mother is longtime Olpe assistant Carolyn Davis.

Olpe finished 24-2 with Neleh playing a key role. The following year, the Eagles went 24-1 and took third in 2A. The only defeat was an overtime state semifinal loss to Valley Heights. VH then fell to Central Plains in the finals. Colleen’s sister, Macy, joined the Eagles as a freshman that year.

Last season, Olpe had a 23-1 record, the only defeat to Hanover in the first round of the 1A state tournament. Hanover fell to Central Plains in the state finale.

This winter, Central Plains and Olpe were ranked first and second all year, respectively, in Class 1A. The teams both entered state undefeated and were on opposite sides of the bracket. Central Plains has the state all-time longest winning streak at 136 games. Olpe features coach Jesse Nelson, Kansas’ leader in career wins at 926. He has three state titles, all in perfect seasons: ’81, ’10 and ’11.

Davis is the only senior and has greatly enjoyed playing for her mother. Nelson puts Macy “up there” with the best point guards he’s ever had.

“I like playing for our senior,” Macy said. “Like it’s super cool to give her a special time with us, and it’s fun. It’s a blast. We have been working together since we have been young kids, so we’ve had good chemistry, and it feels like we click together, and we know where everyone is at, so it really helps us. We are confident in each other.”

On Thursday, Olpe easily defeated Norwich, 59-43 at the Class 1A state tournament at United Wireless Arena. The win included 10 points from Davis, along with 14 points and five assists from Smith.

In the next game, Central Plains rolled over Ingalls, 93-47. Both teams improved to 26-0. CP sophomore Kassidy Nixon, the lone non-senior in the Oiler starting lineup, said she has “had a blast” playing with the Oiler senior starters Emily Ryan, Addison Crites, Delaney Rugan and Rachel Lamatsch. Ryan cleared 3,000 career points and finished with 20 points and five assists. She also went over 700 career assists.

Neither Olpe nor Central Plains focused much on COVID-19, commonly known as the coronavirus. During the day, coronavirus had caused the cancellation/suspension of many international and U.S. sporting events, including the NBA, MLB and March Madness.

Just before she left United Wireless, Carolyn Davis asked a media member for a copy of the box score of the day’s first game between Centralia and Cunningham. Centralia had rallied from an 18-point deficit after three quarters and won 48-46 on a last-second basket from Kennedy Becker.

She led the Panthers with 21 points. Cunningham standout junior Morgan Meyers had another brilliant game with 24 points, five rebounds and three assists. Meyers missed two shots late and was emotional on the court after the game.

“We kind of didn’t really pay attention to it, because we didn’t want to think that they would actually cancel it due to sickness,” Nixon said.

The final game of Thursday’s quarterfinals was Otis-Bison/Hanover. Central Plains players sat in the stands as they found out KSHSAA has cancelled the rest of the state tournament. A key tipping point came Thursday when government agencies, led by the governor’s office, declared Kansas in “a state of emergency.”

Nixon and Ryan were among those who had flowing tears in the aftermath of the announcement. Hanover eventually defeated O-B, 41-36, in a game that came down to the final seconds.

Otis-Bison’s Maddie Wiltse completed her remarkable career with 25 points and 13 rebounds. She played in four sub-state/state games in the last two years and had at least 20 points and 10 rebounds in every contest. Lohse, in her final game, led Hanover with 16 points.

Lohse did not know the tournament concluded until UWA public address made the announcement after Hanover’s win. Lohse gave Hanover coach Chris Beikmann a long embrace on the court. Lohse was just six points away from reaching 1,000 in her career as well, which would have happened with two games remaining.

“Tonight I played my last high school basketball game without even knowing it,” she wrote. “I feel robbed of what my senior season could’ve been.”

The ’19-20 season will feature a number of historical oddities, most notably with the remaining undefeated teams like Central Plains and Olpe. Davis, a key four-year player with more than 1,000 career points, finishes her career with a 97-4 record, though no state titles. The only state championship berth came versus Hanover. Central Plains remains on its current run with six consecutive state titles.

Well-known Kansas historian Carol Swenson said in an e-mail he doesn’t “believe there would be a comparable situation” to this winter. Swenson also said the tournament has “never before” not finished, including during World War II.

In addition to CP and Olpe, Topeka and Liberal both finished 23-0 in 6A. Nemaha Central and Spearville earned 24-0 records in 3A and 2A, respectively.

NC has never won a crown. Liberal’s only title came in ’76, while Topeka’s lone titles were in ’81-82. Spearville’s last championship came in ’90.

Neither Liberal nor Topeka had a perfect season when it won championships.

The boys’ side finished with two perfect teams: 6A Haysville-Campus and 5A Andover, both 23-0. Neither Campus or Andover had ever won a state title.

Campus delivered a 66-50 victory versus Manhattan behind 26 points from Sterling Chapman and a 360 degree dunk from Keither Florence that made ESPN. Andover held off Blue Valley Southwest, 60-59, with 21 points from Jack Johnson.

For the girls, Liberal beat Olathe South, 41-33. Liberal, at state for the third straight year, finished third in 5A two winters ago. The Redskins were upset in the 1/8 matchup in 2019 by Olathe Northwest. Machia Mullens paced Liberal with 20 points as both teams shot under 40 percent.

Every state qualifying team still had a first-round game, played either Wednesday or Thursday. Several squads accomplished school history. A significant trend was four No. 8 seeds upsetting No. 1 on the boys’ side.

In 1A, Stockton beat previously undefeated Berean Academy, 38-33, in a game where both teams shot under 30 percent. Ethan Means led the Tigers with 14 points and 10 rebounds.

In 3A, St. Marys defeated its fourth ranked team in a row with a 49-44 victory against Haven. SM was plus-10 on the glass, including 13 points and eight rebounds, both team-bests, from Isiah Holz.

Also in 3A, Frontenac girls completed a perfect season against Kansas teams with a 42-40 overtime victory versus Jefferson County West. Karma Fields had 15 points for Frontenac.

The Galena boys won their first ever state game on Wednesday as they knocked off Burlington. Freshman Tyler Little had 24 while sophomore Brett Sarwinski had 15.

In 5A boys, Hays High boys came back from 10 points down after the first quarter and beat Topeka Highland Park, 46-43. HHS received 19 points from Carson Kieffer. Hays High (17-6) enjoyed an eight-win improvement from last year and looked for its first title game berth since 1944.

In 2A girls, WaKeeney-Trego defeated Bennington, 45-31, and completed a 23-1 season. The Golden Eagles had its trademark excellent defense and permitted just nine total points in the second half. Lili Shubert scored 13 points for Trego.

Also in 2A girls, Garden Plain defeated Sterling, 54-48. Last year, GP beat Sterling for the 2A state championship. Both teams shot under 30 percent from the field. However, the Owls went 7 of 15 on treys, and had 18 points from Kennedy Horacek. Alli Puetz finished with six points and 14 rebounds in a game that had 97 rebounds.

In 2A boys, consensus favorite Bishop Seabury completed a 22-2 season with a 72-45 win versus Valley Heights. Seabury had never made a final in state history. Zach Bloch completed another big year with 27 points on 12 of 15 shooting, five assists and four steals. Stavian Jones had 21 points. Seabury set program records for most wins, highest winning percentage and largest margin of victory throughout a season.

In 1A boys, South Central advanced to the state tournament for the first time since Coldwater and Protection consolidated. SC beat Lebo, 41-38 with 23 points and 11 rebounds from Xavier Frazier. SC went 21-5.

Little River will certainly be a team to look at as they punched a ticket to the semifinal and return everyone from this season, including Jayden Garrison (nearly 1,500 career points) and Trey Rolfs. Plus, Graham Stephens was out with an injury and the Redskins start two freshman. Quite the season for the team that made the tourney for the first time in 20 years.