v Kuplen, Sports in Kansas honored by KWCA - Sports in Kansas 
Warning: include(../includes/bodytag.php): failed to open stream: No such file or directory in /home/kansass/public_html/ks/news/index.php on line 36

KWCA named Sports in Kansas Media of the Year. 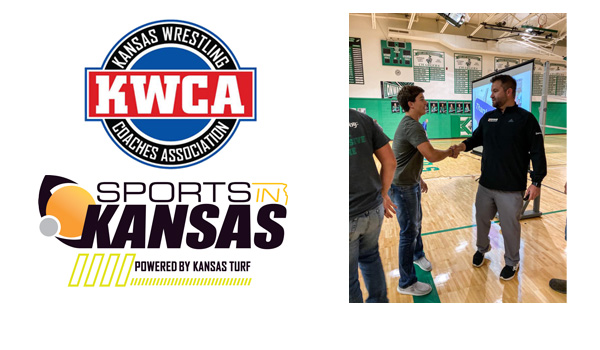 “This award is very cool to see but I definitely think of it as a Sports in Kansas award not an individual award.  We’re very appreciative of the KWCA for honoring us. Not possible without our weekly content from Conor Nicholl and the recaps that he does, he’s incredible. We’ve had more wrestling coverage this year than we’ve ever had, plus we covered girls wrestling for the first time as a KSHSAA sport. We also dedicated a statewide radio segment every week just for wrestling this year and Mike Snow did a great job of hosting the Sports in Kansas show for us this year. Also have to give thanks to Bill Wachter and Wayne Gilmore at My Town Media and KLKC Radio for being great partners for our radio shows over the years to give us that large platform. Sean Frye also covered girls state wrestling with all of the photos for us this year and did a great job.” Kuplen said.

“We’ve had the opportunity to meet a lot of great people in the wrestling community the last few years as we expand our coverage. I have to give a big shout out to Andy Albright of Chanute for introducing us to a lot of the right people and opportunities. Aaron Amershek did a great job of covering wrestling (Kansas On the Mat) a few years back before he moved to Wisconsin and we partnered with him at Sports in Kansas. Once Aaron was gone from covering it there was a huge drop off from a social media/radio standpoint. We knew how hungry the sport was for media coverage so that’s when we’ve decided to get big in it. It’s the hardest sport out there to compete in and deserves all the media coverage it gets despite not being considered a mainstream money sport by media outlets. Wrestling is getting huge in Kansas and we’re here to cover it for the long haul.”  Kuplen said.

Special thanks to Mammoth Sports Consturction/Kansas Turf, Nex-Tech Wireless, Seatbelts Are For Everyone (SAFE), Labette Community College, Visit Salina, American Implement for their support in our award winning coverage this season!