v Faces in KS: Madelyne Koop - Sports in Kansas 
Warning: include(../includes/bodytag.php): failed to open stream: No such file or directory in /home/kansass/public_html/ks/news/index.php on line 36

Madelyne Koop is having a huge junior season. 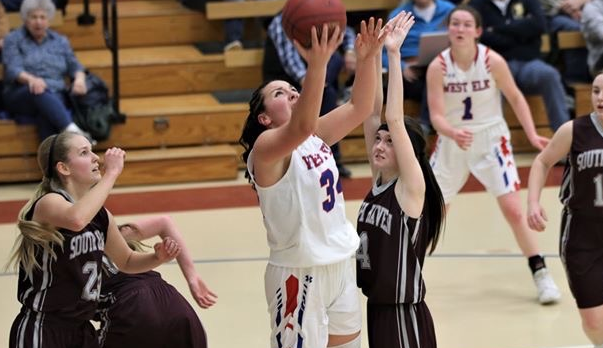 Madelyne Koop is a self-described gym-rat that has grown up around the game of basketball. She has been an immediate impact player at West Elk this season after playing the last two seasons at Eureka High School.

Koop, a 5-foot-10, junior, has went over 1,000 career points already with an entire season left in 2020-2021. What was even a cooler/crazier moment on the 1,000 points is that she did it in the same game as teammate Megan McLendon. It's not often you see two girls on the same high school team have 1,000 points let alone do it in the same game. While in high school Koop has helped both of her teams at West Elk and Eureka to a 59-9 record.

Koop is a multiple sport athlete as well. Many may not realize she is a very good wrestler but doesn't do it at the high school level as she is in basketball. She took second in the Kansas USA State Wrestling Tournament in 2019 and also won the 2018 state arm wrestling contest in 2018 while taking second in that nation. In her spare time she barrel races and is involved with showing livestock with her family. Koop earned SIK All-State honors last season for basketball. She's also a volleyball, track and softball player.

The Patriots have been a force all-season in 2A and have a 21-1 record entering the sub-state championship matchup on Saturday under head coach Dave Miller. Miller is a very busy guy this time of the year as he is also the boys head coach who are still alive in the 2A boys postseason.

Koop comes from an athletic background. Her mother played basketball at Fort Hays State and her dad was a state champion wrestler at West Elk that went on to win a national title at Neosho Community College. She tells us her competitive nature and work ethic comes from her parents.

Koop is one of the top 2A players in the state this season along with McClendon. The two each average 14 points per game this season. Koop is one of the very few players in the state to average a double-double as she pulls down nearly 11 rebounds per contest. Junior Hayley Helms is also having a big year with seven points and five boards per contest. Koop has made a team high 79 free throws this season. She also has 32 steals, second to only McClendon who has 52.

The lone loss of West Elk came to Koop’s former team, Eureka, 31-30, this season but the Patriots have been one of the best small school teams in the state this season.

They will be back in action Saturday at 6 p.m. against traditional state power Garden Plain (16-5). West Elk has made back-to-back state appearances (2018, 2019) and looking for their third in a row. Prior to 2018, the last state tournament appearance was in 1990.

We caught up with Koop below in the latest Q&A edition of Faces in Kansas.

Presented by Koop Fence & Barn Construction in Howard, Kansas. Best of luck to the Patriots!

High School girls basketball coverage this season is presented by Wheat State Elite. Best of luck to all teams in the postseason.

My mom played college basketball at Fort Hays State and my dad was a 2 time state champ and national champion for West Elk. He wrestled at Neosho Community College.  My parents taught me to be competitive and work hard from day one. Pretty sure my mom had me dribbling as soon as I could walk!

Win sub state and State! Help my team anyway I can.

Power is my strength! I think experience on the court helps me too.

It is exciting!  Our small-town support and school spirit is amazing!

Fiercely competitive and exciting! I play like it is the last game I will ever play.

Our team is a threat at all angles! We are great with the inside game and can drain the three if open! Our defense is super tuff as well.

I am a gym rat and I love all the game of basketball, but if I had to choose it would be the experience and memories made with the teammates I have played with.

I play volleyball as an outside hitter! I also do track (shot put, disc, and javelin).  I will be also playing softball this year (3rd, and first base!  I have also wrestled.

I am glad to be at West Elk!  It is my first year to play for him!  We are having a blast this season! Looking forward to continue on this season with him and our team!

Our school team lifts weights, practices, and plays in some tournaments in the summer.  I also play on a Wheat State Elite team in the spring and summer.

I want to play the game of basketball in college and earn a degree!

Barrel race and show livestock with my family

English, hands on and visual learner, 3.5

My dad! He taught me to give it all I got every time I step on the court.

Sweet and Spicy is our mexican, Poplar is our pizza, and Toots is our cheeseburgers all in Howard! They all have great food!!

Won the State arm wrestling championship in Kansas was ranked #2 in the nation in 2018!

Went to Eureka freshman and sophomore year then my family moved to Howard.

I have played for many coaches from TN to KS.  Every coach has a different philosophy and style of coaching.  All the experience has help me to prepare for my role in playing and coaching at a high level.  It has also taught me to work hard, play hard, and never take anything for granted.  Dream big!!!! I am also so grateful for the opportunity to be featured on Sports in Kansas!