v Nex-Tech Wireless Athlete of the Month: Dillon Dunn - Sports in Kansas 
Warning: include(../includes/bodytag.php): failed to open stream: No such file or directory in /home/kansass/public_html/ks/news/index.php on line 36

Dillon Dunn after he captured regionals before going on to win the 3-2-1A title. 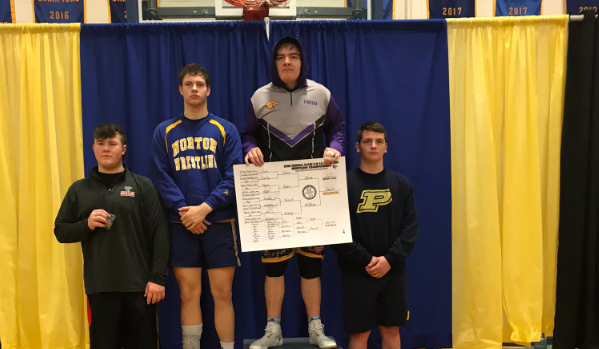 “Since the beginning,” Trego coach Jeremy Samson said. “That’s been very big for Dillon was having coach Malay there always, for everything he has went through.”

The duo has also another connection: socks.

Known for his superstitions, Dunn finished the Western Kansas Tournament of Champions in Ellis on Jan. 31. Dunn couldn’t find his lucky socks. The next tournament was the Leoti Round Robin on Feb 7.

“He wouldn’t have needed any kind of luck,” Samson said. “But Dillon is one of those routine guys.”

Malay happened to still have the socks he wore for his state title. Malay brought them to the school and gave them to Dunn.

“That was a big thing for Dillon,” Samson said.

Dunn was upset after the loss, though rebounded to win his first match in 1:41.

“(Friday), I told Dillon it’s going to be a testament to his character how he comes back from that disappointment in the semis to get third,” Samson said. “Because that’s who we are. It was just a great exclamation point for Dillon to come back and get that third-place medal.”

In the third/fourth place match, Dunn ended his career where it started: a 3-1 win versus Norton’s Judson Wiltfong. Samson believed Dunn and Wiltfong have wrestled 50 times.

“It was neat to wrestle Judson Wiltfong,” Samson said. “Because I am pretty sure Dillon wrestled Judson his first match in little kids, so that was a great thing for both of them, I feel like. They have wrestled each other literally their entire life.”

Additionally, senior Parker Opat finished 35-7 at 285 pounds, including 2-2 at state. He hit 100 career victories in the consolation quarterfinals, his last win. Opat was ranked fifth and had to face fourth-ranked Creighton Johnson in the first round. Johnson eventually took third.

Opat earned fourth as a junior with a 36-10 mark. Dunn also qualified as a junior, though was 29-10 overall and 1-2 at state. Dunn, Malay and Opat are the only three 100 victory wrestlers in Golden Eagle history.

“I’m sure going to miss these two,” Samson posted to Twitter after state. “Thank you for being great role models. Love you guys thanks for letting me (be) part of your life. You made Coach Malay and I very proud.”

Boyle, who again wore her smile on the podium after the tournament, achieved several rarities in the competition. First, state was all-classes, and the medals were dominated by upper class schools. Champion Washburn Rural in 6A, runner-up Great Bend is 5A, and Paola, Nickerson, Pratt and Abilene, which finished third through sixth, are 4A. Trego is 2A.

“Just being Sydney,” Samson said. “That was a great thing about it. We got into that arena, and she stayed true to Sydney. She wasn’t all locked up because it was the state tournament, the first time ever. It was Sydney was still Sydney, and she was out there laughing and being herself, and that was very cool.”

Boyle, her team’s only state qualifier, was one of few state girl placers who came from northwest/southwest Kansas. Additionally, Boyle was also a rare placer who lost in her first match. In the first match, Boyle fell by fall in 3 minutes, 37 seconds. After a bye, Boyle defeated Fort Scott’s Hannah Vann by fall in 4:26. Vann was briefly ranked first earlier this winter.

Then, Boyle won by fall in 29 seconds against Basehor-Linwood’s Cadence Christenson to earn a state medal. Then, she lost, 4-2, and defeated Dodge City’s Autumn Perez, 6-5, for fifth. Nearly 1,000 girls competed in wrestling this winter, up from 376 last year. Samson gave significant credit to McPherson coach Doug Kretzer to grow the sport.

“That event was very awesome,” Samson said. “Just to see those girls finally get that opportunity to not have to worry about competing against the boys. It was just an awesome event to be a part of that, to see her and all those girls, to be honest, get to compete for a championship of their own.”

Dunn fell to Hoisington’s Wyatt Pedigo at the Ellis tournament in December. Pedigo then dropped down to 195. Dunn never lost again until state, including a championship in January at the prestigious Bob Kuhn Classic in Hays. Dunn defeated McPherson’s Mason Thrash, a Butler Community College signee and an eventual 5A state placer. Dunn’s goal was a state title.

“He capped it off well,” Samson said. “Dillon Dunn’s that kid that worked his tail off for four years to get where he’s at. Nothing’s come easy to him. If you look at him on the mat, he never passes that eye ball test where you go ‘Holy cow, that guy is going to be tough.’ … But he’s going to wrestle you, and he is going to battle you, it doesn’t matter who it is. So that’s Dillon. He wrestled all year to prove some people wrong that looks are deceiving out there, and I am going to give you six minutes of hell to get it done.”

Nex-Tech Wireless is a proud supporter of high school sports coverage in Kansas w/ Sports in Kansas! Be sure to nominate the Athlete of the Month every month by tweeting @sportsinkansas or emailing sportsinkansas@gmail.com