v Nex-Tech Wireless Athlete of the Month: Wyatt Pedigo - Sports in Kansas 
Warning: include(../includes/bodytag.php): failed to open stream: No such file or directory in /home/kansass/public_html/ks/news/index.php on line 36 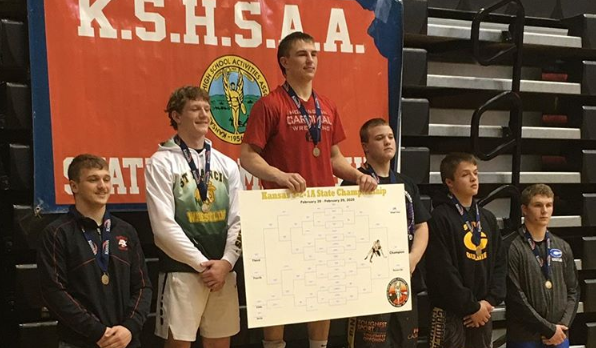 HAYS – Longtime Hoisington High School wrestling coach Dan Schmidt stood off the side, a few feet away from the throng of people taking pictures of the medal presentation for 195 pounds.

Schmidt simply looked at the podium as Cardinal senior Wyatt Pedigo collected his third straight title medal and winner’s bracket at the Class 3-2-1A state wrestling championship last Saturday at Fort Hays’ Gross Memorial Coliseum. Schmidt has coached many of the recent seminal wrestlers in 3-2-1A history, notably the Ball brothers: Brandon, Joshua and Christopher, who collectively won eight titles.

Pedigo, earns this months Nex-Tech Wireless Central Kansas Athlete of the Month, after he finished 37-0 as the classification’s only undefeated wrestler. He won his first three matches by fall in 2 minutes, 35 seconds, a 17-6 major decision, a 10-3 decision and then an 11-3 major decision in the finals versus Gypsum-Southeast of Saline junior Sterling Harp.

This season, Pedigo set a team record with a five-second fall. He delivered a trio of five-second falls, a remarkable achievement. In his last three years, Pedigo finished 33-9, 38-3 and 39-1. As a junior, Pedigo was one of two 3-2-1A wrestlers to pin their way through the state bracket.

Pedigo came close to breaking the school record for career falls and probably could have accomplished the feat if he wrestled a full season. He missed the first tournament since football just ended, and the league tournament was cancelled because of weather.

However, Schmidt looked past all the records and numbers.

“That’s not what’s important to him,” Schmidt said. “He’s not about statistics. He’s about going out and trying to be a great role model for the kids in the room, winning championships and doing it the right way, and I think that’s what our team remembers him by – and the people that know him will remember him for.”

Like Anthony Leiker, a former Cardinal wrestler and current assistant, Pedigo has come from a loving family that has generationally struggled financially.

“Grew up in a similar situation, had to work hard, didn’t have a lot of money,” Schmidt said of Leiker and Pedigo. “The kids, they didn’t have the fancy cars or all the neat stuff. But they had learned a great work ethic, and I think he noticed that, and they had such similar backgrounds growing up, and they could really relate. And the hard work, not just in the wrestling room, but what you’ve got to do to be successful in life.”

Pedigo is one of the first in his family to attend college, along with his older sister. The family poured in to make sure Pedigo had success. Pedigo has wrestled since he was six. After the state finale, the normally even-keeled Pedigo said he was “blessed” and was thankful for everyone who supported him. Pedigo scored 26 team points, tied for the sixth-most in the field, and led the Cardinals to a seventh-place team finish with 68 points.

“That bond to say ‘Hey man, no matter where you come from, you don’t have to be that person who lives up on the hill,’” Schmidt said. “You can start out at any level in society, and if you really want to work hard, you can achieve whatever you put your mind to, and that’s certainly where Anthony has come from. Anthony’s parents are proud as heck of him, and now Wyatt’s parents got to be tremendously proud, too of him.”

As a freshman, Pedigo did not place at 170 pounds. Hoisington finished second in the team standings with 113 points, 13 behind Norton. Pedigo won his first match by fall in 4 minutes, 36 seconds. In the quarterfinals, Pedigo nearly had Phillipsburg’s Mark Coomes beat.

“He had a really bad break,” Schmidt said.

Pedigo was awarded points and was expected to win. The wrestlers stood up to shake hands. Then, the other official came in and questioned the points. After a conversation, the officials reversed the call, and the match went to overtime. Pedigo lost 7-5.

“It really caught us off guard,” Schmidt said.

On the backside, Pedigo fell in another tough match, 7-6. He never lost at the state tournament again. As a sophomore, Pedigo won his four matches by fall in 1:42, 3-2, 8-2 and 3-2. Hoisington again took second as a team with 92.5 points, tying the best finish in school history.

“That taste of almost there,” Schmidt said. “The feeling and knowledge of understanding in his mind that he can do it, I think that really blew up, so when he came back the next year, he wasn’t going to let anything be in doubt.

“We are going after it, and I think that really spurred him on,” he added. “Sometimes defeat can have a way of motivating, and certainly in that case, it did. And he has special ever since.”

That continued the last two years. He was never threatened in 2019 with three of the four matches at state first period falls.

“His athleticism his off the charts,” Schmidt said. “I mean, it’s hard to describe that a kid at that size could be that quick, that explosive, and yet he doesn’t have a big head. He’s a kid that if you watch him, and you talk to him, you get to know him, he’s the nicest kid in the world.”

This winter, he won the Bob Kuhn Classic at Hays for the first time. After a brief start at 220, Pedigo dropped down to 195. Only Brandon Ball, who has since earned All-American honors with Fort Hays, has collected more Hoisington wrestling titles than Pedigo.

“Will help anyone in our room to get better,” Schmidt said. “Just his personality, his whole character, just a great kid to have. If you are his parents, you have got to be so proud of that kid. Man, what a special kid. So wrestling has been great, it’s been fun. But if you get to know the other side of him, it’s even better.”

Nex-Tech Wireless is a proud supporter of high school sports coverage with Sports in Kansas.