v Sports in Kansas: Sub-State Basketball Update - Sports in Kansas 
Warning: include(../includes/bodytag.php): failed to open stream: No such file or directory in /home/kansass/public_html/ks/news/index.php on line 36 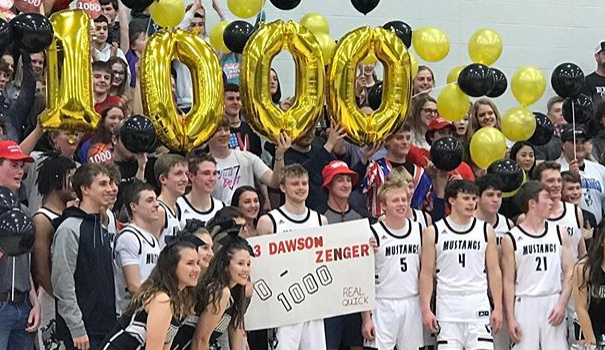 Monday and Tuesday featured the sub-state quarterfinals and semifinals in all classifications, except for Class 1A. Thursday, Friday and Saturday have he semifinals and finals for all classes. Thus far, the matchups have yielded multiple upsets, along with several seminal players, including Goddard-Eisenhower’s Jordan Vincent and Plainville’s Aubree Dewey, ending careers.

Eisenhower fell 55-52 to Valley Center on Tuesday. The Tigers had won six straight contests and were ranked fourth in Class 5A in the final coaches’ rankings. In the regular season, senior Jordan Vincent delivered 24.9 points, 7.3 assists, 6.7 rebounds and 1.4 steals a contest. Vincent tallied more than 1,300 career points. Vincent is third in Kansas among KSHSAA players in scoring, according to MaxPreps’ statewide lists.

Eisenhower was the No. 3 seed in Class 5A West and the only one of the top-six seeds to lose. No. 14 Valley Center improved to 10-11 with the victory. VC will face No. 6 Kapaun (15-6) in Friday’s championship game.

As well, one of the state’s most intense rivalries gets its third matchup of the year when No. 4 Great Bend (17-4) plays host to No. 5 Hays High (15-6) on Friday. Both teams shared the Western Athletic Conference title and went 1-1 this season against each other. Each squad won on its home floor. In sub-state, GB required overtime to beat Salina Central, 63-60, on Tuesday. Hays High struggled early, though had excellent defense and pulled away to beat Arkansas City, 42-26. Hays High was plus-25 on the glass, according to Indian broadcaster Dustin Armbruster. It is rare for HHS and GB to meet in sub-state. The last time was 2013.

Plainville senior Aubree Dewey, a Washburn signing, finished 9-12 with a 42-39 road loss to Oakley on Monday. Oakley, who features Tabor College signing Jordyn Lowrie, is 16-5 and has won 10 in a row. Oakley has allowed just 36.6 points a contest. Oakley outscored Plainville, 15-12, in the fourth quarter. Dewey finished with 12 points, five rebounds, five assists and five steals.

For the season, Dewey averaged 24 points, seven rebounds, 4.4 steals and 4.3 assists a contest. She tallied 504 points this year, including three contests of at least 40 points. She finished with 1,968 points in her career. Last winter, Dewey was a first team all-state 2A pick and finalist for 2A Player of the Year. Dewey is the state’s No. 2 scorer. Central Plains’ Emily Ryan is closing in on 3,000 career points and is third all-time on the state career scoring list. Both Kylee Scheer and Ehlaina Hartman have cleared 1,000 career points and have committed to Emporia State.

Dewey is also sixth in Kansas in assists:

West Elk, ranked fifth in Class 2A, and the top seed in the Sedan sub-state, defeated Cedar Vale/Dexter, 55-21, in the quarterfinals Monday in Howard. West Elk improved to 20-1. The Patriots are on a course to meet Garden Plain (16-5, No. 10 ranking) in the sub-state championship game. Garden Plain won 3A two years ago and 2A last winter. Junior Hayley Helms scored 19 points, junior Madelyne Koop had 17 points, and senior Megan McClendon tallied 12 points.

Koop and McClendon both cleared 1,000 in the game. McClendon also recorded five assists and three steals in the contest, and Koop, one of the state’s top rebounders, recorded another big game with 15 boards. Koop averages 15.3 points and 10.8 rebounds a game. McClendon has 14.3 points, 3.5 assists and 2.7 rebounds per contest. McClendon is a senior, and Koop is a junior. Koop transferred back to WE after she spent her sophomore year at nearby Eureka.

Valley Heights’ Sam Vermetten, and Rock Creek’s Dawson Zenger each cleared 1,000. VH girls are sixth in 2A, and Rock Creek boys are second in 3A. Rock Creek and Royal Valley both have one loss and could meet in Saturday’s finals.Zachary Eck of Ellis also went over 1,000 points against Smith Center earlier this week.

VH is part of a highly competitive Horton sub-state. VH is 19-2 and will face 15-6 Horton in Thursday’s semifinals. As well, Jackson Heights (19-2) gets the rematch with Northeast Kansas League foe Jefferson County North (19-2) in the other semifinal. JCN is seventh and JH is eighth. JCN went 1-1 apiece against JH and Horton.

Upsets in 2A boys in Sedan

The 2A Sedan boys’ sub-state had two upsets on the top-half of the bracket. No. 8 Wichita Independent beat No. 1 Cedar Vale/Dexter, 57-55 in overtime. CV/D was 17-2 at the time of seeding and ranked ninth in 2A. Independent had just five victories.

Who will win 3A boys at Galena?

Good question. This 3A sub-state last year was battle tested with Girard coming out as champion over Baxter while going on to win the entire thing. These teams have beat up on each other all year and any of the four remaining can win it. The sub-state features 3A all-state candidates Patrick Cassidy (Columbus), Brett Sarwinski (Galena), Brant Morris (Baxter Springs) and Hayden Pile (Frontenac) that lead their respective teams. Cassidy has unlimited range and went for 40 against Frontenac earlier this year to erase a 8-point lead with 25 seconds left with his three 3-pointers to knock the Raiders out of a CNC title. Frontenac also features some size in 6-foot-8 sophomore Jordan Fudge and 6-foot-5 sophomore Landon Dean, a Division I football talent. Galena has one of the best freshman in the state in 6-foot-5 Tyler Little and won the league despite being picked sixth of seventh in the preseason. They will be around for a while with sophomore Sarwinski and freshman Little. Baxter, led by Morris, who is a Division I baseball commit to University of Central Arkansas, has turned it on this second semester and has pulled off some upsets. Any one of these teams can win it and any one of them could make noise in the 3A tourney. Expect an oustanding atompshere on Thursday and Saturday in Galena, which features one of the best gyms in 3A Kansas.

Upsets in 3A girls in Cimarron

Goodland had lost to Scott City twice in the regular season. In the regular season finale, though, the Cowgirls delivered an overtime victory versus the Beavers, ranked fifth in 3A. Goodland continued its upsets in the first round of the 3A Cimarron sub-state. The Cowgirls had fallen to Hugoton twice, both times by at least 15 points. However, Goodland defeated Hugoton, 29-27.

Can Erie do it?

Erie hasn't been to state boys basketball in 27 years (1993). The Red Devils, now in Class 2A, have been a 3A program for a majority of the years and paired in very difficult sub-states. They easily handled St. Mary's Colgan in round one of sub-state on Tuesday and should be the favorite to win the Yates Center sub-state. They have Yates Center matchup in the semifinal, but YC doesn't feature 1,500 point scorer Aaron King anymore. Erie is led by point guard Matthew Vail, sharpshooting Mark Bogner and the inside play of Eric Dillinger. Head Coach Nick Pfeifer has done nice work with this team. Uniontown and Northeast-Arma are also playing solid this time of the year and cant be counted out. The four left traditionally aren't teams that are making the state tournament year in and year out, so we will have some new blood at the state tournament this year with Colgan not making it. Colgan has only missed state three times since 1996 (2001, 2016, 2020).

In a rarity, traditional power McPherson boys will not make the state tournament. No. 10 Emporia (12-9) beat No. 7 McPherson (13-8) with a 63-55 overtime victory Tuesday. Emporia will play Andover (21-0, No. 2 in 5A) in the semifinals. McPherson is second all-time with 56 career state appearances.

In 5A East, No. 7 Blue Valley Southwest defeated No. 10 Pittsburg, 72-57. Pittsburg missed all-state junior guard Javon Grant. Gavyn Elkamil was one of the top players in the state this season for Pittsburg who averaged over 24 points per game.

Top seeds hold in 6A Girls

Jeff DeLaTorre finished his final game on Wednesday in a road loss for the Fort Scott Tigers to the Independence boys team. The long time coach who had been at Fort Scott since 2000-2001 season won over 300 games combined at both Yates Center and Fort Scott. DeLaTorre also won two state 4A titles in 2004 and 2005, in addition to a state runner-up (2007) and third place (2012). He was 278-173 according to Scott Nuzum formerly of the Fort Scott Tribune. He was twice the KBCA Coach of the Year in 4A Basketball.