v Sports in Kansas: Girls State Wrestling Preview - Sports in Kansas 
Warning: include(../includes/bodytag.php): failed to open stream: No such file or directory in /home/kansass/public_html/ks/news/index.php on line 36

Girls at the Paola regional earlier this season. 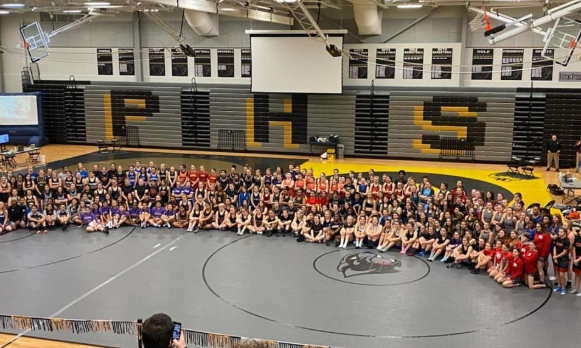 The coaches drew girls from a variety of sports, including golf, softball, and cheerleading. Great Bend had 10 girls at the end of last year. This winter, the Panthers started with 26 and ended around 16.

“We just targeted the girls that we knew were competitors, and weren’t doing anything in the winter,” Broeckelman said.

Garden City put veteran junior Anjelina Serrano on a poster - similar to the “we want you” Uncle Sam signs that the government has used for generations for recruiting military.

“Pretty good response, and we got several freshmen out,” Prieto said.

Parker wanted to set a foundation for future years and had 62 girls start for wrestling. Washburn Rural had around 49 complete the winter, a team that Parker labeled probably the biggest girls’ wrestling roster “on the planet.” WR split its boys and girls into two practices because of the high volume.

Rural, which wasn’t ranked in the top-10 by the Kansas Wrestling Coaches Association until Jan. 21, easily captured the Class 6A regional with 190.5 points, well ahead of runner-up Fort Scott at 102. WR is currently ranked first.

In McPherson, Great Bend held off Garden City, 123-122 to win the West regional. Great Bend qualified five for state. GC tied Rural with six, the most among all teams. Garden City was outside of the top-10 and still is not ranked entering state.

The influx of new wrestlers along with several returning nationally ranked elites has created a wide-open state tournament.

“We are just going to show up on Thursday and see what happens,” Parker said. “We are looking forward to the challenge.”

Girls’ wrestling, led by McPherson coach Doug Kretzer, held an unofficial state tournament the last three years. Numbers grew each season with 376 last winter, according to numbers from USA Wrestling. This winter, nearly 1,000 girls competed. The rankings have consistently changed throughout the 2019-20, notably at the higher weights.

“With the girls, it’s such an unknown,” Parker said. “Like this whole thing has been one big experiment all year long. Just because I don’t know the girls that are in the western half of the state, because we never see them, so that was way harder to predict. And I don’t envy the job of the guy that does the state rankings every week.”

Broeckelman has served on the ranking committee. He labeled Washburn Rural the favorite.

“It’s kind of hard to tell,” Broeckelman said. “The team point score is really close when you look at the rankings from first all the way like down to 15th.”

As of Feb. 19, five Kansans are nationally ranked by Flo Wrestling.

Including matches against boys, Moore is 35-7 this winter. She has more than 110 career victories, the majority against boys, and is Nickerson’s all-time career wins leader. As a pioneer in the sport and her success across both genders, a CBS television crew followed Moore at regionals.

“A lot of interesting matchups”

All but Rose is ranked first in their respective weight classes. At 123, Rose is second behind Paola junior Jordyn Knecht, who has been nationally ranked in the past. Knecht came back from a significant knee injury that cost her all of last year and stands at 27-0. If seeds hold, Knecht/Rose is arguably the most anticipated championship match. Knecht and Moore earned top regional wrestler awards.

Additionally, KC Piper junior Sara Lake is 24-0 at 136. The only girl on the Piper roster, Lake has been ranked first all year in a strong weight class that features four other wrestlers with three or fewer losses.

“There will be a lot of interesting matchups at some of those weights as well, but yeah I think that’s going to an exciting one,” Broeckelman said of 123.

Nickerson, which was No. 1 in the Feb. 11 team rankings, qualified two to state with Moore and freshman 235-pounder Maddi Miller (16-1). She is ranked fourth.

“Nickerson for instance, might have two finalists, and that could put them in the top three as a team,” Broeckelman said. “When it comes down to it, I think two to three medals could get you a team trophy this year.”

“So many new girls”

The new wrestlers brought challenges in the rankings. Only a couple of girls were in the 235 class in ’18-19. When the winter started, just two wrestlers were ranked at 235: Caney Valley senior Grace Pinkerton and Fort Scott junior Laurin Thompson. Neither qualified for state.

“This year, they were pretty much all brand new,” Broeckelman said.

Robinson was first at 191 and has stayed there all season. The only other 191-pounder still ranked who was in the preseason poll is Emporia junior Trinity Ervin. More than 14 freshmen are ranked in the final poll, more than any boys’ classification.

Hoxie coach Mike Porsch has coached a quarter century with the Indians. He has seen multiple top girls in the summer. Porsch said he’s “all for” girls’ wrestling.

“A lot of these girls that are wrestling haven’t wrestled more than three or four months out of their whole life,” coach Porsch said. “Quite a few of them have, and you can tell a difference. But the ones that just started … got so much better.”

This winter, Hoxie qualified two. Porsch’s daughter, Marissa, is a 130-pound sophomore and went 24-9. Senior Ashlyn Kaus, who has also been on the Hoxie football team, is 22-14 at 143. Neither wrestled before this year.

“They are tougher than boys I think sometimes,” Porsch said. “They don’t have any egos. They want to learn, and they didn’t have any preconceived ideas of what good wrestling was and not, so they believed everything I told them.

“So we didn’t have bad habits to break, and I think that’s the biggest reason why you are seeing the jump in the level over the season is there’s just a little bit more mat time and feeling different positions and stuff. It’s really exciting to me.”

Marissa, whose two older brothers combined for six state titles for Hoxie, had attended some freestyle practices in the summer and did some stance and motion.

“She did a lot of work in the dark when nobody was watching,” coach Porsch said. “Helped her out.”

Broeckelman tried to look past just the win-loss records when ranking. Instead, he also focused on whether the girls had faced a first-year competitor or one who had competed “for quite awhile.” Marissa worked into the rankings at sixth at 136 on Dec. 15, the season’s third poll. She moved to fifth on Jan. 21 at 130 and remained ranked until Feb. 11.

“Sometimes they surprise us, which is good,” Broeckelman said. “It’s good that they are performing to where their coach says they are performing, but a lot of times it takes awhile for us to get one of those girls in (the rankings) that we don’t really know much about.”

Additionally, Track Wrestling is the industry leader for the sport’s statistics. However, some results were challenging to find.

“If they don’t have their team track updated, sometimes it’s hard to go back and try to find all those losses and wins when you have to go through all the different tournaments, especially late in the year,” Broeckelman said.

“Probably the best athlete that we have out”

Great Bend wrestled a full girls’ schedule and many of its wrestlers recorded 30-35 matches, compared to 10-15 for most foes. Garden City traveled to the Kansas City Stampede and faced quality out of state opponents.

“Put them in really, really tough competitions throughout the year and get them ready,” Prieto said. “That’s why maybe our records aren’t as good.”

Ridgeway has wrestled for many years, and Elliott, ranked third, has significant experience. Ridgeway captured an unofficial state title at McPherson last winter and was ranked first all this year. She had beaten Serrano three times, though was pinned late in the regional finals.

“We are working on some of those positions that she got in that she wasn’t comfortable with,” Broeckelman said. “She doesn’t even know really why she stayed in those positions.”

Ridgeway was ranked first and is currently third. She is expected to have a semifinals match against Lawrence Free State sophomore Madyson Gray, 31-0 and currently ranked first. Gray competed on the Kansas national dual team, along with Rose, Knecht, Mayginnes, Robinson, Moore and others.

“We will have a pretty tough girl from Lawrence Free State in Madyson Gray, but I think Bre is still, in my opinion, the No. 1 girl in that weight,” Broeckelman said.

This is Mogbo’s second year in wrestling, and the first for Perez and Deines. Broeckelman credited his team for also recruiting other new wrestlers. Broeckelman coaches the pole vault in the spring.

“You have got to be pretty tough mentally to be able to pole vault, so I just figured why wouldn’t they be able to be a tough wrestler, and that’s just kind of how some of them are,” he said.

Parker found similar results with recruiting. Johnson is the only one back who was in WR’s room last year. She and Smith practice with the boys. As well, senior 155-pounder Halley Robinett (26-6), freshman 116-pounder Addison Broxterman (29-9), and senior 109-pounder Jaiden Taggart (27-1) qualified.

Anderson (26-1) is a transfer. Parker noticed her power in softball and knew she could help in wrestling. Broxterman comes from a strong wrestling family. Parker believes Broxterman’s younger brother, Easton, could be Olympic-caliber one day. Easton recently took second at the 12-and-under Liberty Nationals America Crown.

Taggart came over from cheerleading. Her first loss came in the regional finals to Independence junior Alexis Allen, ranked first at 109. Allen is 27-0. She defeated Taggart by fall in 3:01 – after she captured her first four regional matches by fall in a combined 3:05.

“Between the boys’ and girls’ team, probably the best athlete that we have out for wrestling between all 110 kids or whatever we got,” Parker said of Taggart. “She can do back handsprings off the wall. She is crazy. But she has never wrestled before. This is her first year, and she is just a total sponge, picks it all up really quickly and is always looking for ways to get better.”