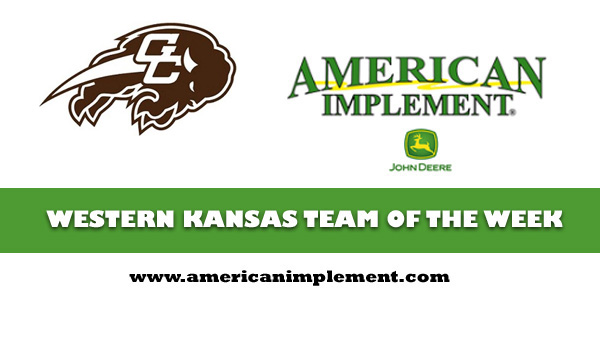 Garden City High School coach Carlos Prieto has coached wrestling since 1997. Prieto was first at Ulysses, and then came to Garden City as an assistant. This winter marks his ninth year as the Buffaloes’ head coach. Prieto led Garden City to team state titles from 2013-16.

He has three children, two daughters and a son:  29-year-old Stefani, 25-year-old Kyshia and Michael, 22. Michael wrestled at South Dakota State after a highly decorated high school career that featured four individual state championships and classification Senior Wrestler of the Year. His daughters both wanted to wrestle when they were younger, but their father wouldn’t allow it.

Girls’ wrestling in Kansas had grown the previous three winters with unofficial state tournaments held in McPherson. Before this year, Garden City produced quality wrestlers with Chloe Sullivan and Anjelina Serrano, whom continually impressed Prieto. He has “definitely changed my mind” on allowing girls to wrestle.

This year is the first time girls’ wrestling was sanctioned in the Sunflower State.  On Feb. 15, Garden City, unranked through the year, took second at the KSHSAA Girls West Regional held at McPherson.

Garden City collected 122 points, one behind Great Bend. The Buffaloes qualified six wrestlers for this Thursday’s all classes state tournament at the Tony’s Pizza Events Center in Salina. GC tied Washburn Rural, which won the East regional, for most qualifiers.

“Those girls work just as hard as the boys, and I just couldn’t be more excited and proud, and excited for girls’ wrestling out here in the state of Kansas,” he said. “It was an awesome experience.”

At 130, Serrano, a junior, captured a regional title against Great Bend sophomore Bre Ridgeway, who was ranked first and undefeated. Serrano is 32-6 with three previous losses to Ridgeway since Jan. 12. She was ranked fourth before regionals. Serrano earned team wrestler of the week for her performance. She won by fall in 5 minutes, 31 seconds, and Ridgeway moved to 32-1.

Last year, Serrano took fourth at girls’ unofficial state, although just lost once, to McPherson standout Mya Kretzer. Serrano was the only wrestler to take Kretzer a full match at state.

“People call it an upset,” Prieto said. “I don’t. I really truly expected that. The last matches that we wrestled against her haven’t been close, but we have tweaked some things, done some things, watched film and it paid off, and so that just goes to show you what kind of girl (Serrano) is. She is coachable, and she is willing to get better at each and every single day at practice.”

Freshman Belle Hernandez (16-7) qualified at 136, and sophomore Alondra Guzman (17-13) got through at 155. Sullivan was fifth, Corado sixth, Avila sixth, Hernandez fourth and Guzman sixth. The top-six in each regional qualified for the 12-wrestler state bracket.

Prieto has tried to schedule a challenging slate for the girls. The Buffs faced wrestlers from different states and went to the KC Stampede. Prieto, similar to coaching his son, has primarily focused on technique with the girls.

“If my boys worked as hard as the girls did in practice, we would be unbeatable, and that’s just a mentality that the girls bring in,” Prieto said. “They are like sponges. They want to learn, and they want to work hard. It’s like they don’t want to disappoint us, and so that’s been one of the most positive things as a coach for me this year.”

In the pre-state rankings that came out Feb. 18, Garden City remained out of the top-10 in the team poll. Serrano is still the only Buff individual ranked at second at 130, up two spots from the previous poll.

Lawrence Free State sophomore Madison Gray is first at 32-0, and Ridgeway is third. They are both on the same side of the bracket. Prieto believed the team would be ranked after regionals and has told his team to “let our wrestling do the talking.”

“That’s something that we can’t control, and all we can control is our wrestling,” Prieto said. “And we are going to try to get on the podium as a team at the state tournament with the girls that we take, and I like our chances, I really do.”

Prieto, like many wrestling coaches, started to heavily recruit once girls’ wrestling was sanctioned last spring. Sullivan and Serrano are the only GC state qualifiers that had significant wrestling experience before this year. Last winter, the Buffs had four girls in the roster: Sullivan, Serrano, Guzman and a JV competitor.

Garden City made a poster with Serrano. Additionally, Prieto is very active on social media, with information and humorous tweets that have drawn program interest.

“It was kind of like Uncle Sam,” Prieto said of the poster. “’We want you,’ and we kind of themed it off that, and got pretty good response, and we got several freshmen out this year. Now that the girls have done well, we have had a lot of interest, and plus I try to promote our program, both boys and girls, through social media.”

Prieto coaches girls’ golf in the fall. Avila lives with one of the golfers. She showed Prieto a video of Avila wrestling boys.

“I am like, ‘I have got to get this girl out for wrestling, so I talked to her,’” Prieto said. “She’s like, “I don’t know anything about wrestling.’”

Prieto mentioned the videos and believed she had some skill. Avila, a cross country/track runner, has enjoyed wrestling and bought into the system.

“She has got crazy hips,” Prieto said. “That’s one thing that you can’t coach is hips, and she has got awesome hips. She is aware of where she is at, and she can control her body. But she has come a long ways. … I wish I had her for a couple more years, because I think this girl could really, really be special.”

Hernandez, a younger sister of Garden City wrestling standouts, began wrestling last year. She wrestled 123 all season and lost to Avila in a ranking match. Hernandez was crying and hugged Prieto after the defeat. Prieto told her to bump up weight classes to 136.

At first, Hernandez wasn’t sure since she was going to give up a lot of weight. She called her parents. They had a meeting in Prieto’s office. Prieto said the increase in weight class would “be a great experience” no matter the outcome.

“Wow, she wrestled lights out and qualified, and so I couldn’t be more happy for her,” Prieto said.

Guzman stays after practice with one of the assistant coaches. They worked in the fitness room, and she delivered five to six miles daily to work herself in shape. Around Christmas, she wrote a letter thanking Prieto for the program. At regionals, she came back from an 3-0 deficit to qualify for state.

“They don’t want to disappoint,” Prieto said. “She basically said I am going to make you happy, and proud of me. I am proud of her no matter whether she qualified or not just because of how hard she works. She is going to get better. She is just a sophomore, and I think she is going to turn into a really, really decent wrestler.”

Garden City boys with solid showing at 6A Regional

“The Wall” is considered one of the greatest traditions at Garden City High School. Every state placer, dating to 1955, has their picture and accomplishments displayed near the Buffalo wrestling room. Overall, GC has 275 state medalists, including 42 champions and 54 runner-ups. Seven wrestlers have placed four times. Coach Prieto has greatly enjoyed Garden City’s tradition and having wrestlers on “The Wall” when careers end.

“I wasn’t the greatest wrestler in the world, but I think that’s what fueled my passion as a coach and just to make my kids better, kids like myself that I think had potential,” Prieto said. “And try to get them over the hump to become better wrestlers and get their name up on the podium at the state tournament.”

Last year, Garden City took third as a team in 6A with three titles: Silas Pineda at 113, Jacob Holt at 132, and Fuji Chairez at 285. Chairez, a four-year starter on the GC offensive line, had committed to Missouri Southern for football. However, Chairez elected to sign with Garden City Community College, enroll early and not wrestle. He talked with Prieto after wrestling started.

“I respect his decision, and we will move forward from there,” Prieto said.

Garden City has still remained a 6A powerhouse and ranked third last week behind Mill Valley and Washburn Rural.

Last weekend, Garden City boys took fourth in the Class 6A West Regional at Washburn Rural. Host WR won with 240.5 points. Dodge City was second at 190, Derby third at 177, and GC fourth at 165. The top-eight in each 6A weight qualified for state this Friday and Saturday at Park City’s Hartman Arena.

Holt (27-2) took first at 138, while sophomore Erick Dominguez (28-15) was third at 145. Holt, a senior, has been ranked second behind Olathe South senior Dallas Koelzer.

At 152, junior Josh Janas (35-10) was third, though had a unique bracket. He lost his quarterfinal match, 4-2, to Manhattan’s Daron Island-Jones. Then, he reeled off three straight victories, including a 7-4 win against Campus’ Nathan Bowen in the consolation semifinals. In the third-place match, Janas defeated Island-Jones, 2-1.

Last winter, Janas was seeded 23rd and took fifth at the prestigious Rocky Welton tournament in Garden City. Janas, whose father Richard won both an individual and team title for the Buffs in the late ‘90s, earned fifth at state last season. Prieto believes Janas has to “believe in himself,” and is one of the team’s “silent leaders” this year.

“This kid is on a mission,” Prieto said.

American Implement is a proud supporter of high school sports with Sports in Kansas.