v Faces in KS: Brady Palen - Sports in Kansas 
Warning: include(../includes/bodytag.php): failed to open stream: No such file or directory in /home/kansass/public_html/ks/news/index.php on line 36

Brady Palen is one of the states best high jumpers. 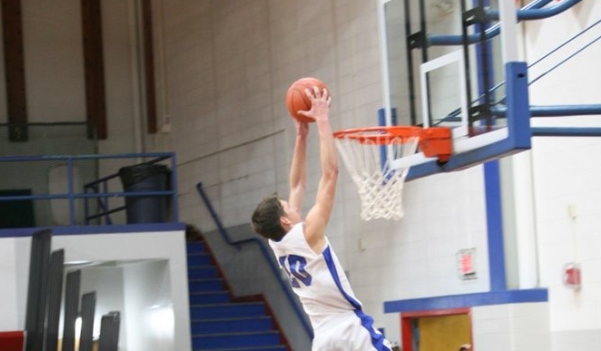 Brady Palen is one of the state’s most impressive and explosive athletes in Kansas. The high-flying senior is one of the top high jumpers in all of Kansas and a standout basketball player for the Beloit St. Johns/Tipton High School basketball team.

Palen, a 6-foot-3, 160-pound senior, had a 6-foot-10 and a half high jump last season to rank among the best in all of Kansas as the second best overall in all classes. Palen features a 39-inch vertical and has signed to compete in the high jump at Division I Wichita State. He also features a long jump near 21-foot.

In addition to his success in track and field, he has also had a lot of success in basketball. Palen is averaging 15 points per game, nine rebounds, 2.2 blocks per contest, along with several highlighted dunks as seen on several of our social media platforms. Palen has a wingspan of 6’6” that also helps in his ability as an athlete. He has the ability to rebound and score with his length and explosiveness.

Palen lists his role model as Davis Dubbert. Dubbert, a former St. Johns/Beloit standout that was featured all over the place on Sports in Kansas just a few years back, is now a standout decathlete at Division I Wichita State. Dubbert and Palen have proved you can be from any level and get to the Division I level as elite athletes.

Palen is also an outstanding student with a 3.72 GPA at his high school. He lists his favorite subject as math and is a student always wanting to improve. He ultimately wants to work at a bank back in Beloit, living in the country and can see himself raising cows.

For now, its basketball season for Palen and his team led by head coach Lance Bergmann. The Blujays have won seven of the last eight games and have a 13-5 record on the season. They are back in action this monday against Lincoln.

We caught up with Palen below in the latest Q&A edition of Faces in Kansas below.

This feature is presented by Fouts Insurance. Fouts Insurance is a proud supporter of local high school athletics. Best of luck to the Blujays this season. Visit us online here https://www.foutsinsurance.com/

My goal for the team this season is making it to state. If we can win our substate championship, we will make a run in the state tournament. A personal goal is a between the legs dunk in a game.

If we win our substate, it will give our team the confidence we need to make a run. We have the talent to win state, we just need to all bring it together. Our starters will all have to be threats in order to prevent double teams.

The atmosphere in my town and school is very supportive.

If you want to see a dunk, you don’t need to travel to a city of thousands of people, you can come watch our 1A high school basketball team work hard and never quit.

My favorite thing about basketball is dunking. You can hardly find me in a gym not hanging on the rim or attempting dunks.

I play football, basketball, track and field, and golf.

Football- I played all four years and played wide receiver and safety. My Record was 31-14.

Track and Field- I have made it to state in high jump every year and won my first state championship my junior year. Junior year was a big year. I placed 1st in high jump, long jump, javelin, and 4x100 at the Northern Plains League Meet that year as well. I have officially signed to jump at Wichita State University next year.

Golf- I mostly play sand greens, but I practice on grass greens before I start track practice in the spring. I have made it to state every year and my sophomore year placed 6th. My junior year I placed 1st at the Northern Plains League Tournament.

Coach Bergmann has made me work hard at every practice I have been to. We practice defense in a lot of our drills. A quote from him that I remember is, “Who walks in a gym to practice and does defensive slides? That’s why I’m going to make you do them here.” I have had fun playing for him the last 3.5 years.

Our team has tried to not have an off-season and that is what has made us better. We have all built basketball in to our schedules, and that investment of time is what will help us at the end of the season.

My plans for the next level are high jumping for Wichita State University’s Track Team.

My favorite thing to do when I am not playing sports is drive around the countryside while listening to music.

In 10 years, I see myself in a bank back in Beloit. I would like to live in the country and raise a few cows too.

My favorite subject in school is math. I am a student who wants to get better. Throughout high school I have raised my GPA every year. GPA 3.72

My role model is Davis Dubbert. He is a hard worker and is doing what I want to do. He has given me some good advice and is at Wichita State University competing for the track team.

My favorite place to eat is Tejavan. I would recommend the steak and cheese quesadilla.

The average person doesn’t know that I enjoy herpetology. (Study of Amphibians and Reptiles) I can be found in pastures looking for snakes in the summer.