v American Implement Team of Wk: Wheatland/Grinnell - Sports in Kansas 
Warning: include(../includes/bodytag.php): failed to open stream: No such file or directory in /home/kansass/public_html/ks/news/index.php on line 36

Wheatland-Grinnell is his weeks Western Kansas Team of Week. 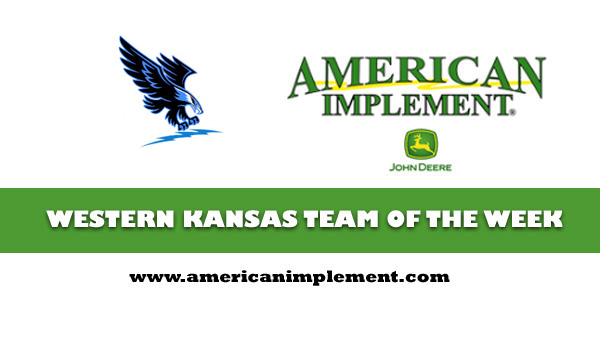 By CONOR NICHOLL for Sports in Kansas - email: Cnicholl1@gmail.com

One of the top social media moments of the 2019-20 basketball season came from Grainfield-Wheatland-Grinnell’s Will Bixenman at @coach_bix.

Bixenman, a former all-state W-G quarterback/defensive back, is currently a PE/Health teacher, athletic/activities director and head boys’ basketball coach at his alma mater.

Last Saturday, Wheatland-Grinnell defeated Almena-Northern Valley, 69-64, to capture the Western Kansas Liberty League tournament championship in Colby. The WKLL, which consists of many of the state’s smallest 1A schools, is generally the last midseason tournament to conclude each winter.

The team’s postgame locker room celebration walks captured in a 66-second clip that is posted on Bixenman’s Twitter. Bixenman walks into the locker room and shouts, “Hey, league champs!” and joins the jumping, water spraying and pure joy that high school sports can offer.

It has earned more than 3,600 views and 90-plus shares, retweets and comments. Bixenman posted: “That was fun. Love these dudes like crazy!”

Longtime Wallace County-Sharon Springs coach Larry O’Connor, who has won multiple state championships, was one of several people that posted on Bixenman’s video.

“This is exactly why we coach, to experience lifetime memories with young men you go to battle with EVERYDAY,” O’Connor wrote. “Sometimes it works out, sometimes it doesn’t. But the journey is very very special. Proud of you coach.”

On Tuesday, Wheatland-Grinnell delivered another impressive performance in a 53-29 road win versus Gove County rival Quinter. W-G trailed 13-11 after the first quarter, and then outscored the Bulldogs, 24-0, in the second. The Thunderhawks tacked on a 16-4 third-quarter margin.

W-G, which enjoyed a big turnaround in football this fall, stands at 12-5 this winter and has already bettered last year’s win total from a 10-11 finish. The Thunderhawks have enjoyed some strong recent success with state tournament appearances in 2012, ’15 and ’17, according to Kansas historian Carol Swenson.

Then-coach Brendan Ptacek led the squads starting in ’14-15. He posted records of 16-7, 18-4, 13-11 before Bixenman took over. Ptacek is currently the assistant coach for the Eureka girls’ team under his mother-in-law, legendary coach Shelly Hoyt. Ptacek has three of his daughters on the Eureka team.

Also in 2018-19, the Thunderhawks finished 1-1 versus Quinter, including a 46-36 loss in the postseason. While Northern Valley had a senior-heavy squad last winter, W-G received 84 percent of its points from non-seniors. Wheatland-Grinnell brought its top-three scorers back for 2019-20.

This year, senior Kyler Haffner averages 13.2 points, seven assists a contest and 3.9 steals a contest, all team-bests. Haffner has more than 750 career points. Junior Trevor Zarybnicky has 12.3 points and 5.7 rebounds a game. Sophomore Trey Vincent has delivered 9.5 points and 2.4 rebounds.

Haffner ranks sixth among KSHAA players in assist to turnover ratio (2.39/1), according to the team’s latest statistical release. Bixenman’s assistant coach is his brother-in-law, Clayton Schwarz. In the WKLL quarterfinals, W-G held off Weskan, 59-53, in overtime, and then beat Logan, 55-38, in the semifinals before the big finals win. The Thunderhawks had lost, 53-40, to Weskan on Dec. 20.

In the fall, Wheatland-Grinnell football improved from 1-8 to 8-2 and a district title, the best season since Grainfield and Grinnell first started playing together in the mid-2000s. In football, Trey Vincent was the quarterback, with Mendez the team’s leading rusher.

Zarybnicky led the team with 95 tackles, and Jett Vincent picked off a state-best 13 passes. Before last fall, the program’s best season was a 6-3 season in 2011 when Will Bixenman was the starting quarterback and accounted for 18 touchdowns and 115 tackles, both team-bests. Bixenman earned selection to the Eight-Man, Division II West all-star team that year.

Additionally, the Thunderhawk girls took third at the WKLL tournament. W-G is 9-8 with veteran coach Cheryl Martin. In the last six years, Martin is 89-44, with a pair of final four showings, including fourth in ’15 and state runner-up in ’17. This year, Thunderhawk seniors Jessi Berbneck and Morgan Zimmerman lead with 10.9 and 10.7 points per contest, respectively.

Rexford-Golden Plains won the girls’ crown and improved to 17-0. The Bulldogs are again ranked tenth in 1A again by the Kansas Basketball Coaches Association. GP is 40-1 since the start of the 2018-19 season.