v Wrestling in KS: Around the State Wrestling Update 2/14 - Sports in Kansas 
Warning: include(../includes/bodytag.php): failed to open stream: No such file or directory in /home/kansass/public_html/ks/news/index.php on line 36

Wrestling in KS: Around the State Wrestling Update 2/14 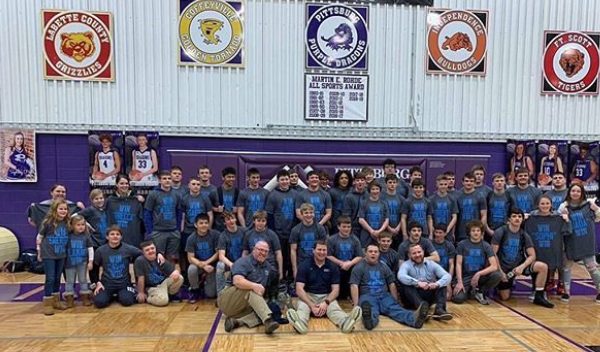 This Friday and Saturday marks the first-ever KSHSAA girls’ regional tournaments. The all-class regionals feature 143 schools and two sites, Paola on the east and McPherson on the west. Competition starts at 1 p.m. on Friday. State is Feb. 27 in Salina.

The Feb. 11 Kansas Wrestling Coaches Association rankings again had some shakeup this week. McPherson was ranked first through Jan. 28. On Feb. 4, Great Bend moved to first and McPherson dropped to fifth. In the latest poll, Nickerson switched from second to first.

Allen enjoyed a massive ranking jump from Feb. 4 to Feb. 11 when she improved from sixth to first. Allen competed at the Wichita South tournament last Saturday. In the finals, Allen defeated Lakin’s Isabell Ortiz, 6-0, in the finals. Ortiz had been ranked first the last two polls.

Nickerson senior Nichole Moore, one of the state’s more well-known wrestlers, is first at 116. Moore has committed to Baker, cleared 100 career victories this year and became Nickerson’s all-time leading wrestler in wins. Moore is ranked third nationally at 117. She also continues to post a strong record as a starter for the Panther boys, too.

Class 123 has two excellent wrestlers with Paola junior Jordyn Knecht and Marysville junior Elise Rose ranked first and second, respectively. Knecht has returned from significant injury suffered last year. Rose, who has again competed some against boys this winter, is ranked No. 13 nationally at 122. Marysville is in the west region, while Paola is in the east.

Great Bend sophomore Bre Ridgeway has held down the top spot at 130 all year. Like Moore, Robinson and Mayginnes, Ridgeway captured a state title at the unofficial girls’ state tournament at McPherson last winter. KC Piper senior Sara Lake has been ranked first at 136 throughout the year.

At 143, Fort Scott senior Hannah Vann pulled an upset versus Labette County senior Abbie Jones earlier this month. Vann was ranked first and Jones second in the Feb. 4 poll. Before then, Jones was first and Vann fifth. This week, Mulvane freshman Kammie Schanz, who was previously ranked sixth at 155, dropped down to 143 and stands first, ahead of Vann and Jones.

Pratt sophomore Liva Swift and Trego Community junior Sydney Boyle – named Most Outstanding Wrestler of the Atwood tournament – are ranked fourth and fifth in arguably one of the girls’ deepest weight classes.

Larned sophomore Ava Mull has consistently been No. 1 at 170. Washburn Rural junior Dajia Anderson, ranked sixth at 235 on Dec. 10, has been first the last three polls.

This week marks the last week of the regular season for the boys’ season. The top-10 in Class 3-2-1A had limited team changes this week. On Feb. 4, Hoxie led, followed by Beloit, Norton, Larned, Rossville and Hoisington. In the latest poll, Hoxie is still first, though now followed by Norton, Beloit, Rossville and Larned.

The top-three squads all competed at the Panther Classic at Phillipsburg last weekend. Hoxie continued to have a great season with 151 points and won the title by 34 points over Norton. Great Bend took third at 112, while Abilene fourth at 93, and Beloit fifth at 86.

The biggest ranking change came at 120 when Whitewater-Remington junior Wyatt Wright took a huge jump from sixth to first. Wright was in 4A last season, took fourth at the Pratt regional and did not place at 4A state. Wright has won three straight tournaments this year, including Circle. The Circle tournament featured 26 schools, with Frontenac first at 220, well ahead of second-place Larned at 153.5 points.

Wright is 28-1 and defeated Council Grove junior Tom VanValkenburg, 14-5, in the major decision. VanValkenburg was ranked first the last two polls and had its first loss of the season. He is 21-1. Before then, Wright had three wins by fall in the tournament.

Hoxie’s Bell moves to first at 126

Additionally, Hoxie sophomore Drew Bell replaced Jayhawk-Linn senior Brody White atop 126. Bell won at Phillipsburg and improved to 33-2. He defeated Phillipsburg’s Jacob Sisson, 3-0, in the finals. Sisson was ranked third. In addition, Hoxie had champions from Aidan Baalman (37-3) at 152 and Andrew Foote (27-9) at 152.

As well, Larned has quietly enjoyed a very strong year for a program that is not known for wrestling. Larned junior Samajay Alboyd, who was unranked on Jan. 28, jumped to first at 145 on Feb. 4. In the latest poll, Alboyd and Kingman sophomore Colby Schreiner flipped top spots.

Last year, Alboyd took fourth at the 4A Pratt regional, though did not place at state. This year, Larned has had the Herington and Central Kansas League tournaments cancelled. He took second at Circle.

Seabolt is a defending state runner-up, while Finnesy and Pedigo are both state champions. At Phillipsburg, Barrientes further cemented his position at 285 with another victory versus Beloit senior Creighton Johnson, who remains second. Barrientes led the Panther field with 26 points, two ahead of Hoxie’s Baalman. Great Bend’s Gage Fritz took third at 23 points.

Barrientes defeated Johnson by fall in 5:39.

Republic County is ranked seventh in the team rankings. RC senior Eyann Zimmerman is ranked third at 285, and junior Kaleb Talkington is fourth at 126. At the NCAA Feb. 13 league meet, Talkington and Zimmerman, a Bethel College football signee, both reached 100 career wins. They are RC’s sixth and seventh all-time wrestlers to hit the mark, according to broadcaster Jesy Strnad.

On Feb. 11, Andale is second, with Scott City, Marysville, K.C. Piper, Tonganoxie, Winfield, and Holton. The 4A No. 1 individual rankings have had limited changes this winter. However, Buhler sophomore Sam Elliott moved from fourth to first at 152 this week.

Class 5A – Goddard stays at the top

The top-six teams did not have any changes with Goddard, Maize, Blue Valley Southwest, Great Bend, Arkansas City, and St. Thomas Aquinas. The top-three individuals in each weight class didn’t have any changes from Feb. 4 to Feb. 11, except at 145 when McPherson senior Rhett Edmonson went from fourth to third. At 138, Goddard junior Isaiah Holmes moved from sixth to fourth.

Similar to 4A, Mill Valley has kept the No. 1 spot. However, the rest of the top-10 went through multiple adjustments. On Feb. 4, Garden City was second, followed by Washburn Rural, Dodge City, Olathe North, Derby, Olathe South, Gardner-Edgerton, Manhattan and Wichita West.