v Wrestling in KS: Around the State Wrestling Update 2/6 - Sports in Kansas 
Warning: include(../includes/bodytag.php): failed to open stream: No such file or directory in /home/kansass/public_html/ks/news/index.php on line 36

Wrestling in KS: Around the State Wrestling Update 2/6

Olathe South had a solid showing at Rocky Welton. 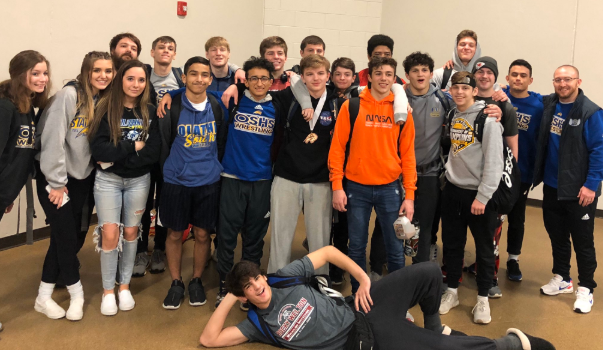 Goddard, the No. 1 team in Class 5A and the top squad for all classes, again captured the 40-team Rocky Welton Invitational with 219 points, well ahead of runner-up Pueblo East (Colo.)’s 181.5. The Welton, held in Garden City, attracts teams from multiple states and is arguably Kansas’ most well-known regular season meet.

Blue Valley Southwest, ranked second in 5A, made the long trek across the state and took fourth – second among Kansas teams – with 176.5 points. Olathe South took seventh with 123.5 points. Dodge City was eighth at 119.5, and Great Bend ninth at 112.

Henschel and Newton’s Grant Treaster again flip-flopped places at 120 in 5A. Henschel is now first, and Treaster is second.

Logan Davidson (11-8) earned seventh at 145, and Jace Fisher captured a prestigious Welton championship at 152. Fisher is 30-8 and scored 28 points. Fisher went 5-0 in the tournament, including 7-6 and 5-4 decisions in his last two matches. In the semifinals, he defeated Garden City’s Josh Janas.

Fisher remained second in the 5A rankings behind Maize standout Devin Gomez.

Also, Cayleb Atkins (32-2) won at 160. Atkins finished 5-0 with an incredible run. He pinned all five of his wrestlers in 4 minutes, 36 seconds or less. Atkins won the championship in 3:11. Atkins, a junior, stayed second in 5A behind Aquinas’ Jared Simma.

As well, Devon Dawson (27-4) captured the championship at 285. Dawson had a bye in the first round, including a 5-4 decision for the championship. Dawson stands first at 285.

Seth Nitzel (31-0) has committed to Missouri wrestling. Nitzel won at 170 with 30 points. He had a bye, won back-to-back matches by fall. After an injury default win in the semifinal, Nitzel won 8-3 in the championship versus Pine Creek (Colo.)’s Draygan Colonese.

Hayden Mills (30-6) earned fourth at 113, and Brett Umentum (32-4) placed second at 126. Umentum had a run against Kansas foes. In the first round, Umentum defeated Lawrence Free State’s Ben Mellenbruch in 46 seconds.

Mills is ranked first, and Umentum third at 126.

After a win against Pueblo East’s Tatum Rivera by fall in 1:18, Umentum faced three straight Kansas wrestlers. In the quarterfinal, Umentum beat Great Bend’s Drew Liles by fall in 3:42. In the semifinals, he defeated Andale’s Hector Serratos, 4-2. In the finals, Umentum lost to Olathe North’s Keegan Slyter, 5-0. Slyter is 46-1.

Madden was ranked first in 5A, Fritz second in 5A on Jan. 28. The two switched places this week.

At 182, Jackson McCall (34-8) earned fourth. He finished 5-2 and lost both matches to Olathe South’s Blake Jouret. In the quarterfinals, Jouret won 3-1 by sudden victory. In the third-place match, Jouret won 5-1.

At 220, Mack Hubbel (26-2) took second when he lost to St. James’ Cade Lautt in the finals. Lautt is second and Hubbel behind Maize’s Kyle Haas, who continues to rank second nationally.

At 106, Nick Treaster (27-1) earned the championship with a big run. He tallied 29.5 points. Treaster won his matches in various ways, by technical fall, fall, major decision, major decision and a 1-0 decision in the final against Lewis-Palmer’s Isiah Blackmon.

Nick Treaster and Stokes both rank second in 5A in their respective classes.

At 120, Grant Treaster, Nick’s brother and a Naval Academy wrestling signee, earned fifth and moved to 33-3. He finished 5-2. Treaster lost to Goddard’s Henschel, 3-2, in ultimate tiebreaker in the consolation semifinal. In the fifth-place match, Treaster defeated Garden City’s Silas Pineda, 5-0.

Olathe South’s Dallas Koelzer (29-2) placed third at 138. Koelzer had a bye, and then went 4-1 in his next five matches. In the third-place match, Koelzer fell Scott City’s Kaden Wren, 3-1, in the tiebreaker. Koelzer beat Great Bend’s George Weber, 4-1, in the consolation semifinal. Koelzer continues to rank second in 6A.

Blake Jouret (28-7) took third at 182 with a 5-1 tournament record. Jouret only lost to Windsor’s Salazar by technical fall at semifinal. Alec Younggren placed ninth at 220 and is 27-7. Jouret is fourth, and Younggren first in the rankings.

Mendez, a sophomore, stands first at 113. Edwards is ranked second in 6A, Barker fourth.

At 106, Kaden Spragis (27-9) placed sixth at 106. He went 4-3 with a pair of losses to Colorado wrestlers, along with a major decision quarterfinal loss to Newton’s Nick Treaster. Spragis is ranked sixth.

George Weber (20-4) placed fifth at 138 with a 5-2 record. At 145, Gage Fritz (33-1) took his first loss of the season. He opened with back-to-back technical fall victories, then had a 10-5 decision in the quarterfinals. In the semifinals, Fritz earned a marquee 3-1 decision versus Blue Valley Southwest’s Brandon Madden. Weber is second, and Fritz is first in the rankings.

In the finals, Fritz lost 7-1 to Aaden Valdez of Pueblo East (Colo.). Alex Randolph improved to 29-3 with a third-place showing at 160. Randolph is ranked fourth. Kevin Miramontes (23-15) finished ninth at 285.

Garden City’s Alex Rodriguez was seeded 27th, though took seventh at 182 and is 18-6. His plus-20 seed-place difference was the largest by any Kansas wrestler.

The other major boys’ tournament this past weekend was the SEK Invitational that featured 18 squads. Chanute, ranked first in 4A, delivered a strong showing with 248 points. Arkansas City, ranked fifth in 5A, earned second with 207 points. Mill Valley, ranked first in Class 6A, took third with 164 points. Mill Valley continued to wrestle at less than full strength, notably without 285-pounder Ethan Kremer, ranked No. 1 in Class 6A.

Bahm came into the rankings at fifth in 6A. Tennant continued to stay third.

At 195, Tyler Green (10-3) lost by sudden victory against Arkansas City’s Deston Miller. Green is ranked second in 6A, and Miller third in 5A.

Hoxie, ranked No. 1 in Class 3-2-1A, won the Western Kansas Tournament of Champions at Ellis with 232.5 points. Norton, ranked second in 3-2-1A, was second with 176.5 points in a tournament that annually combines the Mid-Continent League and Northwest Kansas League. The tournament was held at Ellis.

Shoemaker is second at 120, and Opat is fifth at 285 for ranked wrestlers.

Plainville’s Jordan Finnesy led the tournament with 34 points, and Pfeifer, Phillipsburg’s Aaron Lenker and Baalman all were second with 33 points. Finnesy is ranked first at 182. Pfeifer is fifth at 160, and Lenker stands second at 132. Baalman is ranked second at 152.

This week, it went Hoxie, Beloit, Norton, Larned and Rossville.

This is the final regular season week for girls’ wrestling, in its first year as a KSHSAA sanctioned sport. Regionals are Feb. 14-15 at either McPherson or Paola. The rankings have gone through significant changes throughout the year, notably at the non-No. 1 spots. Last week, the top-five in team standings went McPherson, Nickerson, Lakin, Great Bend and Labette County.

The key rankings’ changes namely occurred with teams on the eastern side. The big change happened at 143, where Fort Scott senior Hannah Vann improved from fifth to first. Labette County senior Abbie Jones, ranked first all season, dropped to second. Fort Scott freshman Riley Cagle came into the rankings at fifth at 106.

At 116, Oakley’s Mikyan Cain and Hutchinson’s Kyler Smith are new in the rankings at fifth and sixth, respectively. At 123, Blue Valley Southwest sophomore Hannah Glynn is now ranked fifth. Olathe West freshman Mikayla Rivera took a big climb from unranked to third at 235.

At Fredonia, Gagle won the championship at 101 and is 20-1 in her freshman year. Independence’s Alexis Allen, ranked sixth, earned the title at 109. Senior Nichole Moore, ranked nationally and first in Kansas at 116, won the title. McPherson’s Kaleigh Marbut, ranked third, won at 123 and improved to 16-2.

Haysville-Campus’ Olivia McNeal took the title at 130, and Burlingame’s Gianna Culbert captured the championship at 136. Culbert (18-0) beat Caney Valley’s Cassidy Anderson by fall in 2:40. Anderson was 15-0 entering the match. Culbert is ranked second, and Anderson third.

Vann won the match against Jones at 143 with a 9-7 sudden victory win in a match of two seniors. Vann is 13-1, and Jones is 16-2. At 155, Andover Central’s Jaquelyn Tschohl won over McPherson’s Holli Giddings.