v Basketball in Kansas: Around the State Update (2/2/20) - Sports in Kansas 
Warning: include(../includes/bodytag.php): failed to open stream: No such file or directory in /home/kansass/public_html/ks/news/index.php on line 36

Basketball in Kansas: Around the State Update (2/2/20)

Machia Mullens of Liberal went over 1,000 points in her career. 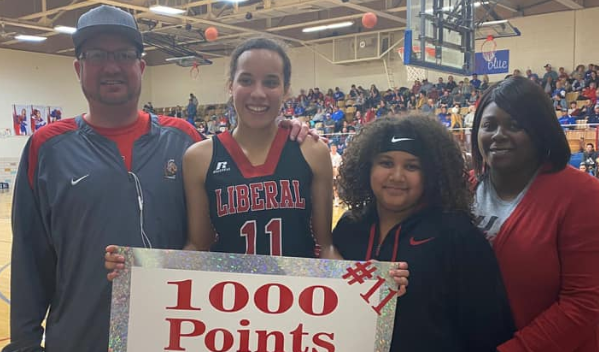 All rankings from the Kansas Basketball Coaches Association as of Jan. 28. All win-loss from the KSHSAA web site, and/or team sites or Sports in Kansas/media reporting.

FS beat Derby, 53-52, in an overtime contest in the semifinals. Derby, ranked fifth in 6A, missed a hurried shot just inside the 3-point line at the buzzer. Topeka High is 12-0 and averages 70 points a contest. Kiki Smith is at 21.7 points and 4.3 rebounds, while Canady is at 18.7 points an 10.6 rebounds. The top-six scorers are all non-seniors.

No. 2 Liberal girls narrowly held off Hugoton, as Machia Mullens, a Division I Kansas City signing, reached 1,000 career points. Liberal is 13-0 after the 41-40 road win versus Hugoton, which is ranked ninth in 3A. Hugoton is 7-4 and had won five in a row, including a 53-44 win versus Sterling, then No. 1 in 2A, and a Sterling tournament championship. Liberal had defeated Hugoton, 59-42, on Dec. 10.

Wichita Heights girls won the Emporia’s Glacier Edge tournament with a 56-34 win versus Washburn Rural, had the best free throw percentage and sophomore Zyanna Walker is the tournament MVP. Heights is 13-0. Heights is ranked fourth in 6A, Washburn Rural stands ninth in 6A. Heights has an average margin of victory of 40 points. Rural is 10-2.

Olathe West’s Bailey Collar broke her own school record with 31 points. Collar, a junior, is one of the state’s top players for the Class of 2021. OW defeated K.C. Schlagle, 62-52, and finished fifth in the Lady Birds Classic. On Thursday, OW point guard Mackenzie Hart had 23 points and 10 steals. Olathe West is ranked eighth in 6A.

Topeka Seaman beat Maize, 65-59, in the finals of the Capital City Classic. Topeka Seaman is ranked ninth in 5A.

Andover Central girls, ranked third in 5A, won the Newton Invitational in a stacked field. AC beat 6A Dodge City in the finals, 63-53. AC made 13 3-pointers, according to DC broadcaster Sean Boston. DC earned second at Newton for the fifth time in school history. Dodge City is 10-4 with all losses to ranked teams: to Liberal (twice), McPherson and Andover Central.

In the semifinals, Dodge City beat Bishop Carroll, 54-35. BC is sixth in 5A. Dodge City reached the finals for the first time since 2003.

For AC, Bailey Wilborn finished with 18 points, including 5 of 8 from 3-point range. Ellie Stearns and Brittany Harshaw each tallied 13. Kisa Unruh finished with 17 for Dodge City, and Chidera Okoro tallied 15 points and 11 rebonds.

Grace Pyle had 19 points, 14 rebounds, five assists and four blocks in 21 minutes for the McPherson girls in the McPherson tournament semifinals. McPherson’s Lakyn Schieferecke defended her crown as the Mid-America Classic free throw contest champion, while the Bullpups’ Emma Ruddle was second, according to McPherson broadcaster Jim Joyner. Pyle averaged 19 points a game and made a tournament-best nine 3s in the three games. McPherson is 12-1.

Salina Central girls, ranked fifth in 5A, earned a 52-39 home victory against Hays High. SC ended the first half on a 15-0 run, according to Indian broadcaster Dustin Armbruster. Salina Central sophomore Aubrie Kierscht had a career-high 27 points. SC is 10-2. After a strong freshman year, Kierscht has upped her scoring to 17.3 points a contest. Sophomore Hampton Williams is second at 10.2 points and is first at 6.6 rebounds a contest. Kierscht has made 36 of 92 3-pointers for 39 percent.

Circle had several honors and finished runner-up to Maize South with a 54-42 loss in the El Dorado tournament. Madi Michaelis earned all-hustle team, and Mallory Cowman and Kimalee Cook picked up all-tournament team. Circle defeated Goddard, 58-53, in overtime in the semifinals. Circle is ranked third in 4A, and Maize South is fourth in 5A.

KC Piper’s Tamar Bates scored 23 on Friday, shortly after he picked up a Kansas offer this week. Piper is first in 4A boys.

Bishop Miege’s Ashton Verhulst scored 31 points versus Olathe North. Miege beat Olathe North, 81-39. Miege is 5-1 in its last six games with its only loss to an Oklahoma squad. Miege is ranked first in 4A and stands at 11-2 with both losses to Oklahoma schools. As well, the Stags defeated rival St. Thomas Aquinas, 54-44, on Jan. 29 in Eastern Kansas League play. Aquinas is ranked second in 5A girls and has just two losses – Miege and Liberty (Mo.).

Nemaha Central girls, ranked No. 1 in 3A, earned the Wellsville Top Gun tournament championship. NC improved to 12-0 and best Wellsville, 72-50, in the finals.

Haven is seventh in 3A, Halstead is eighth in 3A, Cheney is second in 3A, Nickerson fifth in 4A, and Garden Plain seventh in 2A.

Halstead’s Karenna Gerber and Kaleigh O’Brien earned all-tournament team. O’Brien delivered 19 points and 12 rebounds in one of the tournament games. In the semifinals, Haven defeated Halstead, 34-27. Haven has Faith Paramore, who has signed with Oral Roberts.

Scott City girls beat Lakin, 64-27, on Friday. SC, ranked No. 3 in Class 3A, improved to 11-1. Emily Weathers delivered 19, Lyndi Rumford had 13, and Brynn McCormick scored 11, according to Western Kansas News. Weathers has signed with Emporia State, Rumford with Barton County, and McCormick is one of the state’s best sophomores.

Lakin boys defeated Scott City, 63-52, and stayed perfect since the calendar turned to 2020. The Broncs have won eight in a row. Lakin, known for its quick-pace full-court press, improved to 10-2. Hunter Davis tallied 29 points, including a remarkable 18 of 18 from the foul line. Sonnie Altman scored 14.

One-loss Hoisington boys moved into the rankings at seventh in Class 3A this week. Hoisington had 20 points from Mason Haxton in a 58-42 road win versus Pratt. The Cardinals have a marquee home game versus St. John, ranked eighth in 1A boys this week. SJ is 9-3.

TMP boys earned a 66-60 road win versus Abilene and improved to 11-1 with its 11th straight victory. The Monarchs, which earned the MCL tournament title on Jan. 25, had lost 10 in a row to Abilene. TMP is ranked sixth in 3A. Junior Jackson Schulte delivered another big game with 17 points. The last time the Monarchs defeated Abilene was 41-39 on Jan. 13, 2009 when TMP hit a last-second shot for a home victory. Abilene is 7-5 this year and ranked ninth in 4A.

WaKeeney-Trego, up to No. 1 after it won the Mid-Continent League tournament title, cruised to a 53-21 road win versus Hill City on Friday. Junior Lili Shubert continued her impressive run of 20 points games with 22. The Golden Eagles are 14-0.

Oakley, known for its defense and standout senior Jordyn Lowrie, have won four in a row, including a 42-41 slight home upset against Phillipsburg on Friday. Phillipsburg, with standout freshman Taryn Sides, is ranked tenth in 3A. Oakley has won four straight, including three one-point wins: Norton (32-31), Ellis (35-34) and Phillipsburg. Earlier in the season, Oakley also beat Oberlin, 41-40, in overtime. Oakley has two losses to Trego, both in December.

West Elk girls are up to fourth in Class 2A this week. WE defeated Caldwell, 55-33, on Friday. Senior Megan McClendon scored 26 points, while junior Madelyne Koop delivered 15 points and 11 rebounds. WE is 13-0. On Tuesday, the Patriots had a key 49-43 victory versus St. Paul, ranked tenth in 1A.

Megan McClendon finished with 11 points, and six assists. Junior Helms added eight points and nine rebounds. Koop finished with 23 points and eight rebounds. For the season, McClendon averages 15.5 points, 3.7 assists, 2.9 rebounds and 2.8 steals. Koop, a junior, is at 15.2 points and 10 rebounds a game. West Elk still rebounds at a remarkable rate. The Patriots have collected 41.4 percent of available offensive misses.

Spearville girls, ranked fifth in 5A, held Montezuma-South Gray scoreless in the first quarter and won 56-32 for the Southern Plains Iroquois title at Dodge City’s United Wireless Arena on Saturday. The Lancers are 13-0 and won its first SPIAA tournament since 2012. South Gray, ranked seventh in 1A, is 12-2 and has lost both games to Spearville.

No. 1 Central Plains girls beat St. John, 62-13, and won their seventh Hilltop Classic in a row. CP extended its all-time state winning streak to 124 contests. Emily Ryan scored 19 points. It marked the biggest point margin in the tournament’s championship game history. Central Plains is 13-0 and ranked first in 1A girls.

Olpe, ranked No. 2 in Class 1A girls, won its third consecutive Lyon County League and league tournament champions. Olpe is 14-0. On the boys side, Madison knocked off Lebo for the second time this season on a last second shot by Chase Harrison (20 pts in the game) to win the LCL Championship. You can see the video on the SIK twitter feed.

In a wild game, Osborne boys defeated Lakeside, 91-69. Osborne is ranked first in 1A boys. The squads combined to make 29 3-pointers, according to broadcaster Dusty Deines. Grady Wolters made seven treys for Osborne, and Lakeside’s Kylan Cunningham delivered six.

Kiowa County boys defeated Jetmore-Hodgeman County, 45-32, to win the Southern Plains Iroquois championship game Saturday night at Dodge City’s United Wireless Arena. KC improved to 10-3. The Mavericks reached and won their first league tournament final in history. Senior Cooper Zenger has scored double digits in all but one game this season and has averaged 18 points a contest. KC defeated South Gray for the second time in school history in the finals. Zenger had 13 in the victory.

Coldwater-South Central girls are 11-4 and earned third in the SPIAA tournament behind 18 points and five rebounds from freshman Kodie Herd, and 17 points and four rebounds from sophomore Sierra Jellison.  Sophomore Hadley Lohrding delivered three assists and 11 rebounds as South Central finished plus-11 in rebounding margin in the 50-44 win versus Bucklin. SC, with legendary coach Tim Rietzke, has just one senior and nine total players on the roster after it lost its top-four scorers from last year.

On Friday, Rural Vista’s Cameron Campuzano scored 21 in a 47-30 victory against Wakefield.

Cair Paravel, a non-KSHSAA team that is transitioning to KSHSAA next year, delivered an upset, 86-68, against Topeka Hayden on Thursday. Hunter Anderson tallied 30 points, and Noah Hastert scored 25.