v Wrestling in KS: Around the State Wrestling Update 1/29 - Sports in Kansas 
Warning: include(../includes/bodytag.php): failed to open stream: No such file or directory in /home/kansass/public_html/ks/news/index.php on line 36

Wrestling in KS: Around the State Wrestling Update 1/29 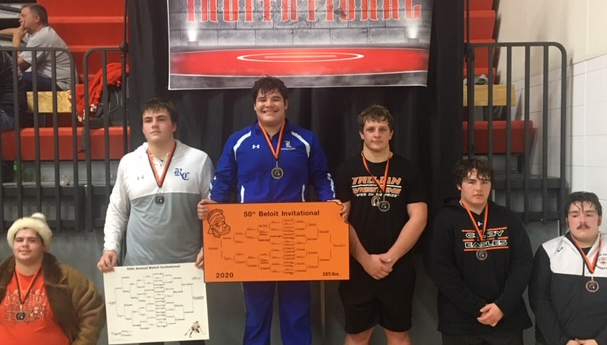 Great  Bend is ranked fourth in 5A, McPherson eighth and Kapaun tenth.

George Weber (15-2) captured the title at 138 with a team-high 28 points – and won one of the highlighted finals matches. Weber won his first three matches by fall, and then had a 2-0 victory in the semifinals. In the championship, Weber beat Garden City’s Jacob Holt, 4-2, in sudden victory. Holt is 21-2. Weber is ranked second at 138 in 5A, and Holt is first in 6A.

4A Ulysses’ Perez dominates at 285 – leads Kuhn field in scoring

He was dominant in all of his matches with four victories by fall, all in two minutes or less. In the finals, he pinned Ellsworth’s Tyler Walford by fall in 1:55. Walford is 13-3 and is fourth in 3-2-1A.

Last year, Hoisington’s Pedigo, a North Dakota football signing and two-time 3-2-1A state champion, finished 39-1 last winter with only a loss to Salina Central’s Taylon Peters at the Bob Kuhn. This year, Pedigo tallied 28 team points, went 4-0 in the tournament and improved to 25-0 for the season. After two falls in a combined 1:45, Pedigo held off Southeast of Saline’s Sterling Harp, 4-0. Pedigo and Harp are ranked first and second at 195 in 3-2-1A.

In the finals, he pinned McPherson’s Landon Frantz, but required the full six minutes. Frantz is 24-3. Frantz is second at 195 in 5A. Pedigo is ranked first in 3-2-1A.

Wright (26-0) won at 106, including a great finals match versus Ulysses’ Quentin Pauda, 4-2, in sudden victory. Pauda was also perfect entering the finals and is 20-1. In the semifinals, Wright beat Great Bend’s Kaden Spragis by technical fall. Pauda is ranked third in 4A.

At 170, freshman Nathan Fury (25-1) won the title and defeated three ranked wrestlers. In the quarterfinals, he defeated Ellis’ Mason Gottschalk by fall in 3:42. In the semifinals, Fury beat McPherson’s Jonah Clarke, 9-8. In the championship, Fury beat Garden City’s Alex Rodriguez, 9-7. Fury is ranked fourth at 170 in 5A.

Last year, Dunn took third at the Bob Kuhn. This year, he delivered a 6-2 victory versus McPherson’s Mason Thrash, a Butler County football commit, in the finals. Thrash is 22-5. In the semifinals, Dunn beat Ellsworth’s Brendan Tripp by technical fall. In the championship, Parker Opat (23-5) earned third at 285.

Pratt’s Devon Weber (27-1) won the 113-pound crown. He is ranked first in 4A. Weber had a bye and then captured a pair of victories by fall. In the finals, Weber earned a 5-3 victory against Campus’ Dylan Sheler.

At 152, Nathan Bowen (24-4) earned first after a win by fall, a pair of decisions, and then won by fall against Garden City’s Josh Janas in the final. Bowen is ranked first in 6A.

At 182, Kourtney Craig (20-5) earned the title. After a first-round bye, Craig won matches by 11-1 and 3-0 margins and earned a fall in 1:38 in the championship versus Kapaun’s Charlie Frisch. Craig is ranked fifth in 5A.

5A’s Blue Valley Southwest cruises to another title at Beloit

The Beloit Invitational celebrated its 50th year and commemorated many past top wrestlers from the tournament.

BVSW won its fourth straight team title at Beloit. While the margins had been in close in previous seasons, BVSW had a sizable margin this time. The Timberwolves had 261.5 points, while Chanute was second at 197. Marysville took third at 133, while Hoxie finished fourth at 131.5 in the 21-team tournament.

At 113, Hayden Mills (27-4) earned the championship, including a 5-3 win in a highlighted title match versus Chanute’s Kolton Misener. Mills is first in 5A ,and Misener is second in 4A.

Brett Umentum (28-3) earned the crown at 126, including three victories versus ranked wrestlers. In the quarterfinals, Umentum beat Marysville’s Isaac Novotny by fall. In the semifinals, Umentum had a 6-4 victory versus Hoxie’s Drew Bell. In the finals, he beat Abilene’s Will Stroda, 9-1. Bell is 25-2, and Stroda is 25-4.

At 132, Weston Becker (25-7) earned the title, including a 9-2 finals victory versus Hoxie’s Derek Johnson. It marked Johnson’s first loss of his career. The standout freshman is 25-1. Johnson continues to stand third at 132.

Daniel McMullen earned the championship at 152 with a 7-1 victory versus Chanute’s Brady McDonald. McMullen is 9-2, and McDonald stands at 23-5. McMullen is fifth in 5A. McDonald is first in 4A.

Nitzel, Colby’s Tyler Voss, and Hoxie’s Dylan Weimer tied for the most individual points at 28. Voss earned the title at 120 and is 22-2. Voss is fifth in 4A.

McDonald is fourth, McDonald first, Winder is third, and Dillow third in the 4A rankings.

Dillow had a highlighted finals match versus Plainville’s Jordan Finnesy, a defending 3-2-1A state champion. In the finals, Dillow improved to 27-0 with a 6-5 ultimate tiebreaker 6-5 win versus Finnesy. In the semifinals, Dillow defeated Blue Valley Southwest’s Jackson McCall, 3-1, in sudden victory.

Finnesy, though, still moved from second to first in 3-2-1A. He flipped spots with Beloit’s Brennan Walker.

Entering the tournament, Beloit’s Creighton Johnson was undefeated and ranked first in 3-2-1A. Republic County’s Eyann Zimmerman had just one overall loss, to Johnson. Barrientes had taken just one loss.

Barrientes defeated Beloit’s Johnson, 3-1, in the semifinals. In the championship, Barrientes beat Zimmerman, 8-5. Barrientes had not faced Zimmerman, though had lost to Johnson earlier this year.

Hoxie, Norton, Beloit ranked first, second and third in 3-2-1A

At 138, Dylan Weimer is 13-1 after a championship. He earned three wins by fall in 2:28 or less. In the finals, Weimer won 2-1 in sudden victory against Marysville’s Joey Bockin. Weimer is first at 138.

Hoxie remains first, while Norton and Beloit flipped spots at second and third, respectively, this week.

Last year, Marysville’s Garron Champoux defeated Colby’s Hagan Booi, a 3-2-1A defending state runner-up, in the Beloit. This season, Champoux defeated Booi, 5-4. Champoux is 19-2, and Booi is 21-2. They continue to rank first and second at 195.

Maize, the No. 3 ranked team in Class 5A behind Goddard and Blue Valley Southwest, scored 421 points, well ahead of second-place Topeka Seaman at 260.5. Mill Valley was third with 242 points, 34 points ahead of Blue Valley West, the next Kansas school. Mill Valley missed three starters, notably top-ranked Zach Keal and Ethan Kremer.

MV received championships with 106-pounder Eddie Hughart and 138-pounder Carson Dulitz, along with Austin Keal at 145. As well, Brodie Scott took second at 170, third place from Cole Moberly at 120, fifth from Kolten Jegen at 220, and sixth by Dalton Harvey at 182.

Devin Gomez took first at 152 with an 11-0 record. Gomez had a bye and then three falls in 2:35 or less and then defeated Hutchinson’s Izaiah Devalle, 3-1.

Kyle Haas, ranked second nationally, is 8-0 and cruised at 220. Haas captured all his four matches by fall in 2:58 or less. Wheeler, Haas and Villalpando led the tournament with 40, 40 and 39.5 points. Gomez, Villalpando and Haas are all ranked No. 1.

Moore, a Baker University commit, has been a starter on the Nickerson boys’ team for the last several years as well as a nationally ranked girl wrestler. Moore cleared 100 career victories in the last week. Moore also wrestled on back-to-back days in two different tournaments 172 one-way miles apart.

Last Friday, Moore took first at 113 pounds at the Nickerson Invitational. Moore moved to 14-5 against boys, including a 10-0 victory versus Wichita North’s Richard Shields for the Nickerson title. As well, Moore’s brother, Gavin, is 20-2 and won the title at 106. He won his three matches by fall in 48 seconds, 35 seconds and 46 seconds.

At the 14-team Independence girls tournament on Saturday, she led Nickerson with 49 points and a fifth-place finish. Burlington was first at 101 points, Chanute second at 73, Labette County third at 70, and Caney Valley fourth at 55.

Nickerson is ranked second in the team standings behind McPherson.

Class 235 went through big changes. On Jan. 21, Pinkerton was ranked first, and Miller was unranked. Now, Washburn Rural’s Dajia Anderson moved from second to first. Miller is second and Pinkerton is fifth.