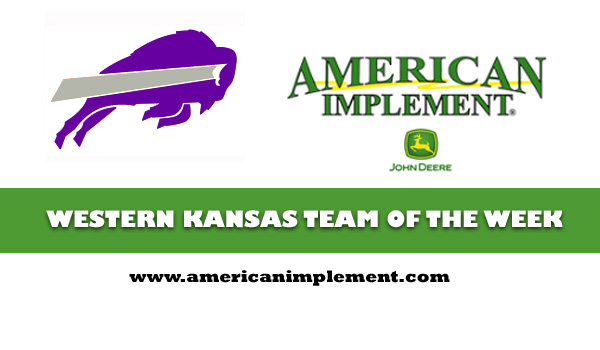 Meade boys’ basketball opened the 2018-19 season with a 5-4 record through the first nine games. The Buffaloes averaged 57.8 points per contest. Meade made 40 treys and shot 29.6 percent from beyond the arc. The Buffs sunk 41 percent of their 2-point attempts.

The Buffs lost two of their top-three scorers from a team that eventually shot 31 percent from beyond the arc. Garrett Gillum graduated after he tallied 12.8 points per game. Hunter Davis (9.8 points a contest) went to Leoti-Wichita County and has blossomed into one of 3A’s top statistical players.

Meade, though, has opened 9-1 this winter behind an incredible offensive efficiency increase. The Buffs started the season ranked fifth in 1A boys by the Kansas Basketball Coaches Association. Meade dropped to tenth on Dec. 16, and has moved to ninth on Dec. 23, eighth on Jan. 14, and eighth again this week.

Meade is the No. 2 seed in the Hi-Plains League tournament behind Lakin. Meade’s only loss came at Cimarron, 51-45, on Dec. 14. Since then, the Buffs have won six in a row, including 48-35 at Southwestern Heights on Jan. 14.

After nine games this winter – Meade’s most recent statistical release – the Buffs have delivered a major offensive change. Meade averages 58.9 points per game. However, the Buffs shoot 39 percent (36 of 92) from long range, and 50.2 percent (166 of 331) on 2-point shots. Meade is up to 1.22 points per possession, an elite rate. The defense is slightly better than last season at .834 points per possession.

Senior Garrett Gillum has a big improvement to 15.8 points and 5.9 rebounds. Freshman Andrew Martin is at 10 points and 3.7 rebounds. Three seniors, Greyson Haynes, Jonathan Unruh, and Preston Woodruff, have contributed. They have combined for 13.1 points per contest. Haynes leads with 2.6 assists a contest, and Woodruff is at a Buff-best 1.9 steals a game.

Shewey is one of the state’s top shooters at 55 percent (12 of 22) from 3-point range, along with 56 percent on 2-pointers, and 73 percent from the foul line. Shewey ranks fifth in Kansas in 3-point shooting percentage among KSHSAA players with at least 10 makes. Overall, Meade is fourth in the state at 39 percent from long range.

American Implement is a proud supporter of Western Kansas Athletics and sports coverage in the state of Kansas with Sports in Kansas. Visit us online here!