Ellis won a tournament in Nebraska this weekend. 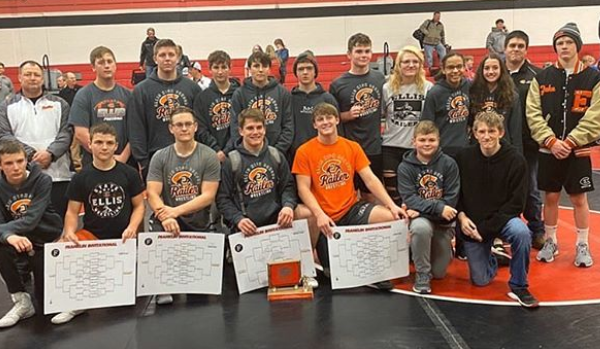 This past weekend featured multiple postponements and cancellations because of poor weather throughout the state, notably in the western, central and southern parts. That caused the cancellation of the 35th annual Derby Invitational, a competition that features Bishop Carroll, Derby, Mill Valley, Aquinas and St. James.

As well, the Burlington tournament is postponed to Jan. 17. Burlington features one of the state’s largest boys’ and girls’ tournaments. The Dick Burns Classic at Bonner Springs was also cancelled, along with the Herington McMillin Invitational, the Louisburg Wildcat Classic, Shawnee Mission South Invitational and Topeka Seaman duals. All boys’ rankings for 5A, 4A and 3-2-1A below as of Jan. 14, the latest polls from the Kansas Wrestling Coaches Association. The 6A boys and all-class girls have not been updated from Dec. 31. Records from Track Wrestling unless otherwise noted.

In a rarity, Western Athletic Conference foes Dodge City and Great Bend both finished with 231.5 points in the 11-team Dodge City meet that featured both boys and girls competition. Valley Center was third with 157 points, while Garden City finished fourth with 156, and Gardner-Edgerton took fifth at 155.5. DC is ranked fifth in 6A.

At 101 girls, Great Bend’s Breckyn Elliott defeated Dodge City’s Jasmin Beltran by fall in 57 seconds. Elliott improved to 14-3, and Beltran is 8-2. Elliott was statistically the most dominant wrestler in the competition.

At 113 boys, Damian Mendez (24-1) took first with four wins by fall and an 8-0 major decision against Pratt’s Devon Weber, who dropped to 18-1. Mendez earned outstanding wrestler of the tournament honors as voted on by the coaches. Mendez is second in the 6A poll at 113, and Weber is still first at 4A 113. Mendez is the defending state champion at 106.

At 145 boys, Garrett Edwards (15-3) earned second place to Great Bend’s Gage Fritz, who won by 11-3 major decision. Fritz improved to 20-0. Fritz went 5-0 with two technical fall victories and a pair of falls before the final. Edwards is third in 6A, and Fritz stayed second in 5A.

At 152 boys, DC’s Luke Barker (22-3) earned three victories by fall, and then collected a 14-2 major decision in the championship.

At 155 girls, Jolette Armarez (4-0) earned her first victories of the year with a 4-2 decision against teammate Ashley Arroyo. Armarez won a 6-4 decision versus Great Bend’s Destiny Lewis.

At 170 boys, Jashon Taylor, a multi-year starter for Dodge City football who was hurt part of the fall, earned the championship. Taylor (8-2) finished 5-0, including a 6-1 and 11-0 decisions in the first two rounds.

After a forfeit, Taylor defeated Great Bend’s Scott Heilman, 9-8, and beat Garden City’s Alex Rodriguez, 5-2, in the championship. Taylor is ranked third at 6A 170. He was fifth at state last year.

Great Bend with multiple champions; a change at 5A 126

For Great Bend, Elliott, Lewis and Fritz were among the standouts. Great Bend remained fourth in 5A. The only change came when Arkansas City and McPherson flip-flopped at fifth and seventh, respectively. Maize and Goddard continue to lead 5A.

In the championship, he fell to Ulysses junior Quentin Pauda by fall. Pauda improved to 13-0 and stayed third at 106 in 4A.

Craig beat Liles, 7-3. Craig is 18-2, and Liles stands at 18-3. Last week, Craig was sixth and Liles fourth. In one of the few ranking changes, Craig is now fourth and Liles fifth.

Panther sophomore Breanna Ridgeway, one of the state’s top wrestlers for all classes, asserted herself with a big tournament. She improved to 13-0, including her first two matches by falls in 29 and 23 seconds. In the final, Ridgeway beat Garden City’s Anjelina Serrano by fall in 3:27. Serrano is 15-4. Ridgeway and Serrano are first and fourth, respectively, at 130.

Along with Alyeus Craig at 126, Tony Caldwell improved to 19-0 at 285. After a first-round bye, Caldwell won his first two matches by fall in a combined 2 minutes, 16 seconds. He won his last two matches, 7-0 and 2-0. In the final, he defeated Ulysses’ Ayston Perez, who suffered his first loss of the year with a 14-1 mark. In the semifinals, Caldwell defeated Dodge City’s Cody Terrell. Caldwell is still first at 5A 285.

KMC scored 224 points, 80 ahead of the competition, at the 52nd annual Augusta Invitational. At 106, Bubba Wright (18-0) took first with a dominant run. He won by fall, then two straight technical fall victories, another win by fall, and 4-0 decision versus Maize South’s Ian Demoss capped the tournament. Demoss is 20-2. Wright and Demoss remained first and third in 5A 106, respectively.

At 132, Joe Walter (13-6) took second with a loss to Rose Hill’s Keegan Beavers. Walter tied for second with four falls and had just 3 minutes, 53 of total mat time in the pins. Walter stayed sixth at 132 in 5A.

At 170, freshman Nathan Fury took second, is 16-1 and suffered his first loss of the winter. He stayed fourth in 5A.

Fury lost, 5-0, to Rose Hill’s David Leck in the championship. Leck is 13-1 and totaled four wins in the victory. Leck dropped a spot from fourth to fifth in the latest 4A rankings.

Slight changes in 4A team rankings

The longtime Norton J.R. Durham Invitational had a girls’ tournament with the first time, along with the boys. Hoxie won the 17-team field with 187 points, while Norton was second with 163. Beloit was fourth at 126.

Norton’s 138-pounder Nick Mandl had four pins – the most among Kansas wrestlers – with a pin time of 9:44. Mandl (8-2) earned third because of a quarterfinal loss to Brecken Loftin of Cozad (Neb.).

Ellis does well at Nebraska

Ellis traveled to Franklin, Nebraska over the weekend where they took first as a team. They had seven wrestlers go into the finals and four take home gold. Konnor Pfeifer is one of the top wrestlers in the state at 160 lbs and was ranked third at the Holiday Break.

At 152, Noah Kliesen (12-1) earned a championship, including a win versus Hoxie’s Aidan Baalman in the semifinals, and by fall in 5:26 in the final versus Weld (Col.)’s Kolton Robertson.

Tate Kandel won at 145 and moved to 12-1. Brennan Walker finished second at 182 and is 12-1. Braden Burks (12-1) took third at 195. All three wrestlers remained the same in the rankings: Kandel fourth, Walker first and Burks third.