v Basketball in Kansas: Around the State Update (1/9/19) - Sports in Kansas 
Warning: include(../includes/bodytag.php): failed to open stream: No such file or directory in /home/kansass/public_html/ks/news/index.php on line 36

Basketball in Kansas: Around the State Update (1/9/19)

Alleigh Kramer of Nemaha Central is having a big senior season. (photo courtesy of Kramer) 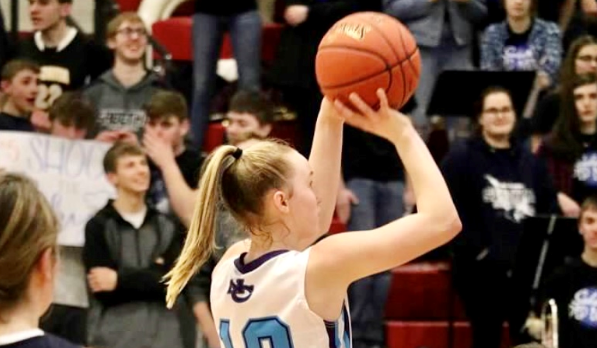 Teams have returned from holiday break and have staggered starts to the 2020 portion of the season. The majority of squads opened back Tuesday. This week highlights Washburn Rural boys’ big win against Manhattan, No. 1 Topeka girls’ improved steal percentage, continued success against ranked teams for McPherson girls, and Baldwin girls leading the state in several categories. Plus, Colby girls and Garden Plain girls remain undefeated, and a look at the 2A Horton girls sub-state. Clifton-Clyde’s Mallory Callihan had one of the big individual performances of the week.

In a key Class 6A boys contest, Washburn Rural defeated Manhattan, 54-47. Manhattan, is ranked second in Class 6A and is 6-1. Washburn Rural, unranked is 5-1. WR made eight treys, and Joe Berry tallied 23 points. At the start of the season, WR was ranked eighth, while Manhattan was unranked. However, in the Dec. 9 poll, Washburn Rural was ninth, and Manhattan bumped to fourth. WR dropped to tenth for a pair of polls, and then fell out in the Dec. 23 rankings, the most recent poll. Rural has won four in a row in the series.

Topeka High, again ranked No. 1 in 6A girls, won at Emporia, 61-32, on Tuesday. Last year, Topeka High lost twice to Washburn Rural, including in the state championship game, and also fell, 50-49 at Emporia on Jan. 24, though defeated the Spartans, 62-33, in February.

The Trojans, very non-senior heavy, had just six points from seniors. Sophomore post Nijaree Canady scored 20 points, while freshman Kiki Smith had 14, and junior Lilly Smith tallied 11. Topeka was 1 off 11 from beyond the arc, though shot 53 percent on 2-point shots. Canady had a complete all-around game with seven rebounds, three assists and three steals. Kiki Smith is at 20.5 points, five rebounds and 4.3 steals, and Canady delivers 18.3 points, nine rebounds and 2.7 steals.

Kiki Smith, one of the state’s leaders in steals, has helped transform Topeka’s defense. Last year, Topeka averaged .978 points per game and allowed .701 points per possession with steals on 15.4 percent of possessions. The Trojans had 236 total steals with 61.3 possessions a game.

This year, Topeka has upped to 70.1 possessions, a very high tempo. Topeka’s offense is actually slightly lower than last winter at .958 points a possession (still very elite). However, the Trojans have lowered their defense to .62 points allowed per possession. Topeka, though, has 105 steals, including steals on 24.9 percent of possession, a remarkably high number.

On Monday, Derby girls defeated Salina Central, 62-60, on a last-second layup from standout freshman Maryn Archer. Derby trailed by three at halftime. The Panthers are sixth in 6A, and Salina Central is third in 5A.

As well, Shawnee Mission Northwest girls, ranked No. 3 in 6A behind Topeka and Liberal, opened with a 51-36 victory versus Olathe Northwest. Kennedy Taylor had 10 points and nine rebounds. Tamara Harris-Webster led with 16 points, and Kylie Dunn tallied 13.

McPherson girls, ranked second in 5A behind St. Thomas Aquinas, have battled injuries/health all season with three starters out nearly all or all of the season. However, the Bullpups are 7-0, including a pair of wins versus ranked teams last Friday and Saturday. McPherson defeated Dodge City, 51-30, at home. DC is ranked No. 9 in 6A.

On Saturday, the Bullpups went to the 810 Varsity tournament and beat K.C. Piper, 44-39. Piper is ranked second in 4A behind Bishop Miege. McPherson will get another ranked foe against Circle, ranked fourth in 4A, on Friday.

On Tuesday, Baldwin defeated Tonganoxie, 50-33, and improved to 6-1. In 4A East, no teams are undefeated, though Baldwin (6-1), Chanute (5-1), Louisburg (4-1), Eudora (4-1) and Bishop Miege (4-1) all have one loss. Senior Josie Boyle had 19 points with seven of 13 shooting. Junior Jenna Harvey had 10 points. Boyle averaged 12.2 points per contest, senior Anna Burnett has 11.7 points per game, and senior Jenna Harvey has 10.3 points and 11.7 rebounds. Harvey has seven offensive rebounds a game and leads KSHSAA players in offensive rebounds, according to MaxPreps statewide lists.

Baldwin’s 179 free throws attempted easily pace Kansas – second-most is 156 from Atwood and then 142 by Coldwater-South Central. Baldwin will play host to KC Piper, ranked second in 4A, in a key game Friday. Baldwin’s only loss is a 46-44 defeat to Basehor-Linwood

Mulvane boys defeated Halstead, 57-38, on Tuesday and improved to 4-3. Sophomore Trey Abasolo has enjoyed a breakout season with 24 points, 10 rebounds, three assists and a pair of steals in the first six games. Mulvane has played a very difficult schedule with all three losses against ranked foes: Augusta (No. 4 in 4A), Parsons (No. 2 in 4A) and Wichita Collegiate (No. 1 in 3A).

Parsons boys, ranked second in 4A, improved to 8-0 with a 41-32 victory against Independence on Tuesday. Parsons and KC Piper (8-0) are the only undefeated teams left in 4A East. Parsons averages 70 points a game, and Piper is at 71. They are the two 4A East teams that are above 61 points a contest.

Rose Hill boys are 5-2 and Koby Campbell had 28 points in Tuesday’s 50-41 victory versus El Dorado. Campbell went over 1,000 career points.

Caney Valley boys are 3-3 behind Camdyn Melchiori. He went over 1,000 career points and set a school record with 47 points on Tuesday.

In a key Mid-East League matchup of ranked boys’ teams, Rock Creek defeated Riley County, 55-51, in double overtime, on Tuesday. Rock Creek is ranked No. 5 in 3A, and Riley County is seventh in 3A. Rock Creek power forward Nolan Churchman, the team’s only senior, scored 20 points. Junior Brooks Whaley had 15 points.

Nemaha Central girls, ranked No. 1, rolled over Riverside, 88-23. NC is 6-0 and has won every game by at least 19 points. Five scored in double figures, including 20 points from Kirsten Lortscher and 16 by Alleigh Kramer.

For decades, Colby and Hoxie, separated by 34 miles, were rivals in the Northwest Kansas League. Colby has moved to the GWAC, and Hoxie is transitioning to Mid-Continent League. On Tuesday, Colby – one of the year’s early surprises – rolled over Hoxie, 52-26, in a battle of ranked teams. Colby vaulted up to No. 7 in the latest poll after it was previously unranked. Hoxie girls are ninth in 2A. Colby is 7-0 and Hoxie is 6-1. Hallie Vaughn tallied 16 points, followed by 15 from Brooklyn Jones and 12 from Jill Stephens, according to Colby broadcaster Jackson Schneider. Vaughn and Stephens combine for 29 points a contest.

On Tuesday, Cheney, ranked fourth in 3A, earned a 58-44 win versus Wichita Independent. Cheney led 13-2 after the first quarter, but Independent outscored the Cardinals, 26-10, in the second quarter. Cheney then outscored Independent, 22-7, in the third and 13-9 in the fourth. The Cardinals have all but six points from non-seniors. Junior Kylie Scheer averaged 24.5 points per game in the first six contests. Cheney is 6-1.

Beloit boys, ranked No. 6 in 3A, defeated Phillipsburg, 47-29, with an excellent defensive third quarter Tuesday. Phillipsburg led 14-8 after the first quarter. However, Beloit outscored Phillipsburg, 20-0, in the third quarter. Beloit has six seniors in its top-eight players. Senior Hudson Gray has 17 points on seven of 10 shooting. Senior Carson Cox has 13 points with four of 9 shooting. Beloit limited the Panthers to 22 percent shooting.

In the War on 24 rivalry on Tuesday, Silver Lake defeated Rossville, 28-27. SL improved to 2-3 with its wins by a combined four points.

Garden Plain, ranked second in 2A, won the Class 3A title two years ago and 2A last winter. GP lost its top-three scorers from last season. The Owls, though, have started 6-0, including a 53-34 road win versus Kingman on Jan. 7. Junior Madysen Zoglman leads with 12.6 points and ranks third at 4.2 rebounds a contest. Senior Kennedy Horacek is second at 11.8 points and 1.3 steals a game.

Sophomore Brooke Hammond – who won three state track championships last spring – has 7.7 points, four rebounds and three steals a contest. Last year, Hammond and Zoglman combined to play in just 21 games with 40 total points. GP is in the Sedan sub-state along with West Elk, 5-0 and ranked No. 8 in 2A.

JH opened with a 62-53 loss to Jefferson County North, an undefeated squad, and then has won four in a row by double figures. JH had lost three straight in the series to Pleasant Ridge and was 1-12 in the previous 13 matchups dating back to a 71-54 victory on Feb. 16, 2010.

Jefferson County North is 6-0, and along with Jackson Heights and Blue Rapids-Valley Heights (3-1) are in the Horton sub-state. JCN, with Missouri Western signee Josie Weishaar, defeated Troy, 64-24, on Monday. Weishaar finished with 21 points. The Chargers are ranked sixth in 2A in the last four weeks.

Oskaloosa girls were 4-17 last year, though has already matched last year’s win total with four returning starters. Oskaloosa has lost to JCN (59-34) and Pleasant Ridge (63-61 in overtime) and then won three in a row, including 52-30 versus McLouth. Junior Regan Curry tallied 15 points with eight steals, while junior Reese Curry had 10 points.

Spearville girls are 6-0 and ranked fifth in 2A. On Dec. 20, Spearville defeated South Gray, 47-39, for SG’s first loss. SG is ranked sixth in 1A. Junior Alissa Heskamp enjoyed another big game with 18 points on 8 of 12 shooting. Senior Ehlaina Hartman has 14 points with six of 17 shooting.

Hartman has signed with Emporia State and went over 1,000 career points earlier this year. Heskamp averages 16 points a game and shoots 50 percent from the field and 37 percent from 3-point range. Hartman is at 17.8 points per contest.

Belle Plaine lost 57-45 to Sterling on Dec. 20. BP was ranked third in 2A and then dropped out of the poll. The Dragons improved to 6-1 with a 72-53 home victory versus Medicine Lodge on Tuesday. Point guard Eli Wiseman delivered 12 points and 10 rebounds in the victory. Austin Hilton collected 23 points and 11 rebounds, and Tim Bible had 22 points and 11 rebounds. Before the game, Hilton was averaging 21 points, seven rebounds and two steals a contest. He was also shooting 58 percent (21 of 36) from 3-point range. Blake was averaging 11 points, seven rebounds, two assists a contest, along with eight charges taken after December.

WaKeeney-Trego girls defeated Wheatland-Grinnell, 61-36. The Golden Eagles, ranked No. 4 in 2A, improved to 7-0. Trego and Republic County (4-0) lead the Ellis sub-state.

Sedan boys are 3-3 with just one senior. Through the first five contests, sophomore Dameion Hattan has put up big numbers with 24.8 points, 9.4 rebounds and 2.2 steals a game.

Lebo boys, ranked No. 1, defeated Hartford, 64-43, on Tuesday. Lebo and Madison are both 7-0 and are each in the Madison regional. Devan McEwen led with 13 points.

Olpe, consistently ranked second in 1A behind Central Plains, defeated Southern Coffey County, 74-13. Olpe is 7-0 and leads the Waverly regional. Neleh Davis, a key four-year player and daughter of longtime assistant coach Carolyn Davis, is the only senior. Junior Hattie Fisher had 22 points in the victory for Jesse Nelson, the state’s all-time winningest coach with more than 900 career victories.

Clifton-Clyde is 8-15, 12-10, 14-8 and 13-9 in the previous four years before an 8-0 start with coach Kieran Wurtz. C-C defeated Blue Valley-Randolph, 61-44, on Tuesday. Mallory Callihan tallied a career-high 29 points and earned team player of the game honors. Callihan has averaged 15.9 points and 10 rebounds a contest. She is a very efficient shooter with 63 percent from the field, all inside the arc. C-C is ranked ninth in 1A.

On Tuesday, Ness City boys improved to 6-2 with a 58-55 win against Dighton. Sophomore Taylor Cable continued his strong year with 20 points. Senior Easton Seib sunk a go-ahead 3-pointer from the corner with five seconds left, a shot similar he hit to the buzzer-beater against Bishop Seabury in the first round of the 2A state tournament last winter. Ness City won the 2A state crown.