Scott City picked up a big win this past weekend. 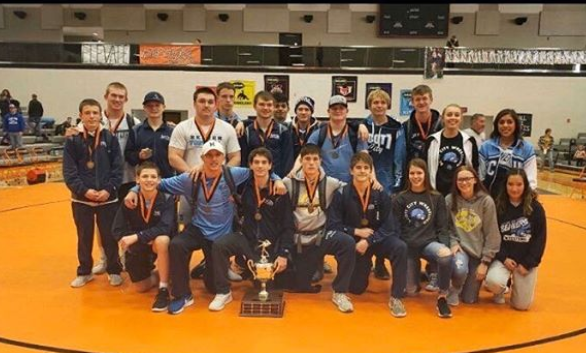 Week 2 of the Kansas High School rankings featured multiple big class teams, including Mill Valley, Blue Valley Southwest and St. Thomas Aquinas, at the 40-team Council Bluffs tournament in Iowa. Chanute, No. 1 in 4A, had a strong showing in Oklahoma. Hoxie and Beloit had big moves up in 3-2-1A. The girls’ side has featured the return of top-ranked Paola junior Jordyn Knecht from injury, and a bump from Caney Valley, one of the smaller schools that has girls’ wrestling. Plus classification changes notably affected Colby and Scott City. Click here for RANKINGS

The top-three teams remained the same with Garden City, Washburn Rural, and Derby. Mill Valley moved from fifth to fourth.

Multiple Class 6A squads headed to the big Council Bluffs Wrestling Classic in Iowa. The tournament featured 40 teams. Mill Valley was ninth at 275, Olathe South was 15th with 210 points. Gardner-Edgerton was 21st with 158.5 points. Olathe North finished 30th with 120 points, though had a title with Keegan Slyter at 126.

Olathe North’s Slyter (12-1) took first at 126 and is ranked first. He opened with a technical fall victory, and then pulled off three wins by fall in 4:55, 3:42, 2:27, and then another technical fall victory. Slyter had a 3:29 fall win in the quarterfinals. In the semifinals, Slyter won 3-2. In the championship, Slyter defeated Fort Dodge’s Carson Taylor, 6-4 in sudden victory.

Then, Aquinas went to the big Council Bluffs Wrestling Classic in Iowa, along with St. James, which finished No. 17 in the 40-team tournament with 178.5 points. Aquinas was 24th with 152.5 points.

Lautt remains second in the rankings.

In the championship, Madden fell, 9-1, to Underwood’s Nick Hamilton in the final. Hamilton is 13-0. Madden is ranked first at 145. BVSW is fourth in the team rankings.

A big rankings change occurred at 195. McPherson senior Landon Frantz was fourth at 182 on Nov. 18. Then, Frantz rose to third in the Dec. 10 poll. He is now No. 1 ranked at 195. Frantz went 7-0 at the Colby Eagle duals, all by pin. The first six came in 2:41 or less, including to Colby’s Hagan Booi, a state runner-up. He also pinned Hays High’s Gavin Meyers in 3:48. Meyers, with recent football offers from Colorado and Kansas State, moved from first to second.

Frantz was third at 182 last winter, including a 9-3 decision versus Meyers in the third-place match at state.

The top-four teams in 4A stayed the same with Chanute, Andale, Marysville, and K.C. Piper. Scott City moved from 3-2-1A to 4A in the new classifications released. SC is fifth in 4A.

No. 1-ranked Chanute headed to the Perry (Okla.) Tournament of Champions. The tournament featured 23 teams and was heavy with Oklahoma squads. Chanute earned fourth with 131 points, while Arkansas City was fifth at 130.5.

For Chanute, sophomore 106-pounder Trent Clements (9-1) finished in third. The previous weekend, Clements was 5-0 at the Big vs. Small Duals in Spring Hill. Clements is still first at 106.

Arkansas City moved up a spot from seventh to sixth in 5A.

Last winter, Colby was strong in the upper weights and called Farr, then mainly a varsity backup, a strong practice partner. Farr has emerged with a nice start. At Hoxie, he captured all five matchups by fall: 1:04, 1:04, 41 seconds, 23 and 2:45. Declan Ryan (5-0) earned the crown at 285 with four wins by fall and a major decision.

Marysville, the defending 4A champion, earned several titles at the Clay Center tournament last weekend, including 145 with Jonny Crome (5-0). He captured all five wins by fall and stayed second at 145 in in the latest rankings. Noah Ackerman (5-0) won at 160 with four victories by fall in 2:21 and an 11-2 major decision victory in the finals. Crome was the only wrestler with five wins by fall in the field.

Champoux is first at 195 again.

Scott City had six individual champions as they won the 54th annual Ulysses Tournament. Kaden Wren (138) and Justus McDaniel (145) are ranked number one in 4A in their weight classes as the Beavers are fifth this week in the KWCA.

Hoxie and Beloit took over the top-two slots in 3-2-1A this week with big performances. After the top duo, previously No. 1 Norton is ranked third, followed by Goodland, Phillipsburg, Hoisington, Rossville, Republic County, Oberlin and Eureka.

Hoxie freshman Derek Johnson has made an instant impact at 132. He was the USA Kids’ wrestling champion in Freestyle and Greco in June and competed in national duals in mid-June. Johnson has opened with back-to-back championships at the Hoxie Invitational on Dec. 7 and again at Clay Center on last Saturday. Johnson has quickly vaulted from sixth to third at 132 in this week’s rankings.

At its own Invitational, Hoxie had championships at 113 with Dayton Bell, Drew Bell at 126, and Johnson at 132.

Dayton Bell is up to third at 113 after first place at Hoxie and second at Clay Center.

At 152, Aidan Baalman (5-0) captured the championship with all first-period falls. Baalman remained third at 152 rankings.

At Clay Center, Hoxie won the title with 147 points in a strong 12-team field, a day after Hoxie lost just three matches in two duals. Valley Center was second at 128.5, and Marysville, the defending 4A titlist, is third at 114.5. Clay Center took fourth at 112.5.

Johnson earned tournament’s Most Outstanding Wrestler and improved to 12-0. He won by a 4-2 decision, by fall in 37 seconds, fall in 3:19, fall by 1:40 and an 8-2 decision in the finals versus Clay Center’s Parker Tholstrup.

Additionally, Drew Bretz (9-2) captured the title at 120. He earned a win by fall in 1:19 in the finals versus Clay Center’s Garett Kalivoda. Drew Bell (11-1) took second at 126 against Valley Center’s Alyeus Craig.

For Valley Center, junior Alyeus Craig (8-0) dominated with four victories and a first-round bye. He is ranked No. 6 at 126 in 5A. Craig had three wins by fall and a 10-0 major decision victory in the semifinals. At 138, Quentin Kirk (9-1) picked up four falls and an injury default victory.

He captured four victories by fall in 2:50 or less. In the finals, he earned a fall in 3:24 versus Stockton’s Rylan Basart. At 195, Braden Burks (6-0) captured the title with an 8-4 decision in the championship against Ellis’ Toby Woodworth.

At 285, Beloit’s Creighton Johnson has emerged as the No. 1-ranked wrestler following season-ending injuries to Lakin’s Hadley Panzer and Hoisington’s Riley Philbern, and the graduation of Sabetha’s Elliott Strahm. Johnson, a placer at 220 last season, is 7-0, including 5-0 in the tournament. He had victories against several top opponents: Cimarron’s Hunter Renick (4-0), WaKeeney-Trego’s Parker Opat (7-2) and Lincoln’s Tra Barrientes (2-1). Opat is fourth, and Barrientes is third in the rankings.

For Hoisington, Eastin Redetzke (6-3) placed first at 106, and Evan Foltz (5-0) earned the crown at 132. Foltz earned 5-4 and 8-6 decisions in his last two matches versus Oberlin’s Corbin Wessel, and Hillsboro’s Garrett Helmer. Redetzke moved into the rankings at No. 6 this week.

Cimarron’s Tate Seabolt earned the title at 170 with five wins by fall. Pedigo, Prochaska, VanValkenburg, Seabolt and Walker all tied for the team with five victories by fall. Pedigo easily had the least time in 3 minutes, 9 seconds. Seabolt is first at 170.

The top-four teams in the Dec. 15 rankings didn’t change with McPherson, Great Bend, Nickerson and Douglass. Caney Valley bumped to fifth to replace to Labette County, which fell to seventh.

This marks the first year that girls is an official KSHSAA sport. In the past, girls had to only wrestle versus boys in sanctioned events. This year, girls have the option to wrestle boys if it is a boys-only competition.

At the Clay Center tournament, two elite girls – Marysville’s Elise Rose and Nickerson’s Nichole Moore – chose to compete in the boys’ division. Rose (1-3) took sixth at 126. Moore, No. 2 ranked nationally by Flo Wrestling, went 2-2 and placed third at 113. Moore is ranked No. 1 in Kansas girls at 116, and Rose is ranked second at 123. Rose is No. 15 nationally.

Paola’s Jordyn Knecht, who has been nationally ranked, missed last season with an injury. Knecht, ranked No. 1 at 123, has returned with back-to-back championships. She took first in varsity girls at the Spring Hill JV and Girls Mixer on Dec. 5, and first at 125A in the Fort Osage Girls Scramble.

At the Scramble, the weight classes featured multiple weight classes of various skill sets. Gardner-Edgerton won with 102 points, the only girls’ squad in the top-12. Paola tied for 13th with 22 points. At 125A, Knecht (5-0) won by fall in 3:35 and with an 8-0 major decision.

At the Great Bend JV/Girls tournament, No. 1-ranked McPherson received a championship at 123 from Kaleigh Marbut. Haley Schafer earned the title at 143, and Holli Giddings won at 155A. Marbut is ranked third at 123, Schafer is second at 143, and Giddings is second at 155.