v Faces in KS: Camdyn Melchiori - Sports in Kansas 
Warning: include(../includes/bodytag.php): failed to open stream: No such file or directory in /home/kansass/public_html/ks/news/index.php on line 36

Melchiori is looking for a huge senior season. 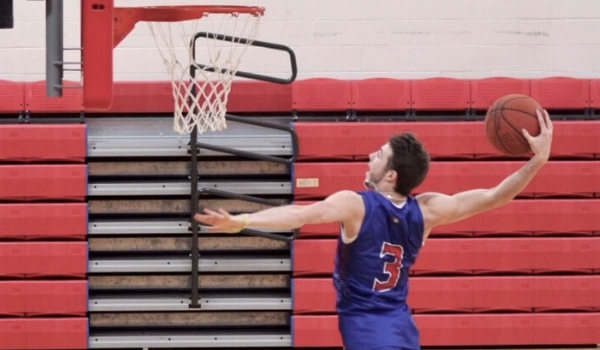 Caney Valley High School senior Camdyn Melchiori is one of the top returning small school guards in the state of Kansas for the 2019-2020 basketball season.

As a junior last season, he earned all-state honors from nearly every publication out there including Sports in Kansas all-state in 3A. Melchiori averaged 19.4 points, 7.1 assists, 4.4 rebounds and 2.3 steals per game as his team finished 15-6. He had one of the most complete stat lines in the state at any level for a guard. Caney Valley led eventual 3A state champion Girard by 10 heading into the fourth quarter of the sub-state semifinal where their season came to an end last March. The 3A sub-state was one of the best in Kansas that featured the likes of Girard, Baxter Springs, Frontenac and Caney Valley.

Melchiori is a sharp shooter at 5-foot-11 and 155-pounds that can play either guard spot. Once he is across half court he can create his own shot and pull up from about anywhere on the court. He also has great floor vision at the point that make him a solid combo-guard in the Class of 2020.

Caney Valley was also kind of an unknown last year as they were hit heavy by key players and their head coach moving before last season after an impressive come out of nowhere 20-3 mark in 2017-2018. Head Coach Andy Gillen, who had multiple state titles on the girls side with Hugoton and South Gray, led Caney Valley to the 2018 state tournament for the first time since 1965 as they lost to eventual state champion Halstead in the first round. Gillen along with his family members Quenten Gillen, Carter Brown and Even Allen-Mader moved to Ogallala, Nebraska where he became the head coach for the 2018-2019 season. Carter Brown, now a senior at Ogallala, was named his classifications player of the year in 2019 after leading his team to a 28-1 record last season. Allen-Mader was a second team all-state selection.

While it’s nice to think with those guys returning CV would have been a title favorite last year and this year but Caney has still been a very successful program that could make a lot of noise in 3A this season. Some of those players that do return are four starters from last years team that include Melchiori, Jace Kaminska, Jace Scott and Trey Richey. Richie and Kaminska both put up 10 points per game last season. They are also very solid rebounders. Kaminska is a solid multiple sport athlete as he has signed with Wichita State to pitch at the Division I level.

While many could complain about having three coaches in four years and say that it is less than ideal. That is not the case with Melchiori. He feels that learning from all three (Josh Wolfe, Andy Gillen, Jim Deaton) has helped shape him into the player he is today by learning something different from all of them.

Melchiori currently has no offers but he is hoping that can change with another big all-state caliber season in 2019-2020. He has a 3.6 GPA at CVHS and always tries to be the best in the classroom.

Caney Valley and Melchiori have big goals this year as they plan on making a run to go deep and compete for the TVL and 3A state title this season. Caney Valley, led by head coach Jim Deaton, is currently unranked but that’s because they are 1-3 with a solid schedule to begin the year. They have played three 4A teams (Independence, Chanute, Rose Hill) and have a loss to a ranked 2A team in Garden Plain. Their lone win came against Chanute who upset Bishop Miege in last years 4A sub-state championship. CV schedule can be a bit deceiving. Each of the last two seasons, Caney's season has ended at the hands of the eventual state champion.

We caught up with the senior outstanding student athlete in the latest Faces in Kansas Q&A below.

I got involved with sports at a young age, my parents both did sports so it runs in the family. As I got older, I decided that basketball was the sport for me.

I want to win every game and come home with a state title.

We have a really good chance to win it all this year.We have 4 returning starters with a lot of experience playing in big games. The past two years we have lost to the state champs so now it’s our turn to be the last team standing.

I think it’s my ability to create shots for myself and my teammates. I see the floor well and I can pull it from anywhere past halfcourt.

Caney is a pretty small town but the atmosphere and fans are one of a kind. We come out on the floor confident and the fans keep that energy  throughout the games. The school is really supportive and do everything they can for the kids.

It’s worth your money! We always try to put on show and I’ll guarantee you won’t be disappointed

Jace K. and Trey both put up 10 a game. They handle the boards and are a big part of our suceess. We have lots of shooters that spread the floor and makes us hard to guard.

There’s not a better feeling than waking up on a game day knowing you get to play that night. It’s a privilege to be able to play and enjoy every part of it.

I ran track my sophomore year and went to state for the 4x400 and pole vault.

I’ve played for 3 different coaches in my high school career. It was an amazing experience learning from different coaches and it made me a better player. My sophomore year coach Andy Gillen, taught me more than just basketball and skills that you need later in life. Coach Deaton came to Caney my junior year and he’s pushed our team to get better each and every day. He works us hard and it’s been paying off.

We went and played some games this summer and had some practices. A few kids play summer ball so most of us stay in the gym all summer.

I haven’t had any offers but hopefully I can change that this year.

During the summer i’m always down at Grand Lake. I enjoy movies and i’m always hanging with m fiends

In ten years i hope to graduate with a bachelors degree in finance and live on the coast working as an advisor.

I don’t really have a favorite subject. I have a 3.6 GPA and always try to be the best in the classroom.

I don’t have any role models, I just try to be the best I can be

I am lactose intolerant but I love ice cream