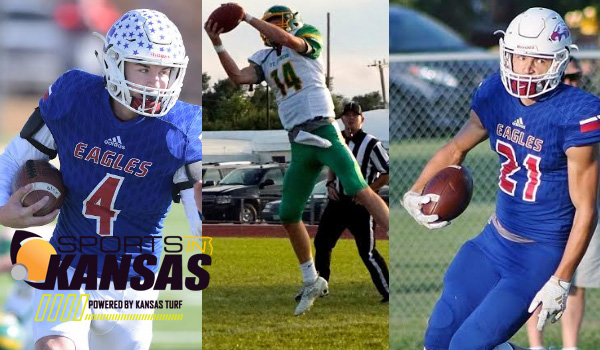 Everett, whom C-G standout sophomore Tyson Struber called the team's leader, paced the Eagles to a 13-0 mark and Eight-Man, Division I state championship. St. Francis led 36-0 with 2 minutes, 57 seconds left in the first half, and then Canton-Galva scored 66 straight points for the biggest comeback in state championship game history. Everett hurt his shoulder in the semifinals contest and required physical therapy at Hutchinson throughout the week of state. He passed for 197 yards, rushed for 148 yards and accounted for seven touchdowns in the title game. Overall, Everett completed 82 of 138 passes for 1,533 yards with a 31/4 TD/INT ratio. Overall, he had 131 carries for 1,310 yards and 28 scores. Everett, who plans to become a firefighter after high school, led C-G to a 13-0 mark. The Eagles were ranked No. 1 all season.

Struber and Dinkel had nearly identical statistics. Struber had 60.5 tackles, seven interceptions and 4.5 tackles for loss. He picked off 10 passes last season as a freshman. Struber missed several weeks with a hand injury, though recorded four interceptions in the last three weeks including an incredible state performance. Dinkel, a four-year starter at defensive back, also had 60.5 tackles and seven interceptions as he was part of two runner-up teams at Sainty. In addition to that they were also both two of the best offensive players in Kansas over the last two seasons. St. Francis set a school record for wins at 12-1 and tied the best finish in school history. Canton-Galva defeated St. Francis in the title game.

Dinkel Gas from Sharon Springs - Propane delivery, Sales, Service and Repairs in NWKS and Eastern CO. would like to congratulate Brady for winning 8M-DI defensive POY.

Mill & Seed - Congratulations to Brady Dinkel for 8M-D1 POY for defense and the St. Francis Indians for a fantastic season.  Mill & Seed is a proud supporter of the Indians.