v Pedigo, Uphaus, Wiltfong named Sports in Kansas 2A POY - Sports in Kansas 
Warning: include(../includes/bodytag.php): failed to open stream: No such file or directory in /home/kansass/public_html/ks/news/index.php on line 36 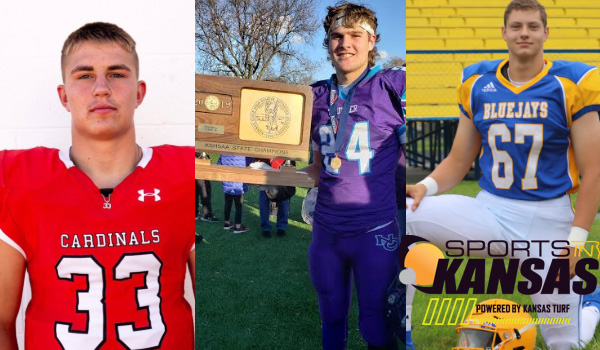 Sports in Kansas 2019 2A Offensive Player of the Year: Wyatt Pedigo, Hoisington

For the second straight year, Pedigo was nominated as a finalist for both 2A awards and again earned Offensive Player of the Year. A Top 11 all classes pick this fall, Pedigo had 182 carries for 2,352 yards and 37 scores. Pedigo, a North Dakota commit, finished as Hoisington's career rushing yardage leader. He led Hoisington to an 11-1 season and its second straight state semifinal berth. Pedigo cleared 100 rushing yards in every game but one – a blowout victory versus Ellsworth. The 6-foot-1, 215-pound Pedigo is a two-time wrestling state champion. He ended his career with 508 carries for 5,171 yards and 74 rushing touchdowns. As a junior, he had 222 carries for 2,101 yards and 29 TDs. Pedigo delivered 115 tackles, 11 for loss and six interceptions on defense in '19. In his career, he had 348 stops with 30 TFLs.

Last spring, Norton's Judson Wiltfong started with the Fort Hays weight program after his older brother, Hayden, committed to the Tigers. Wiltfong added 30 pounds from last year and delivered a remarkable statistical season for a defensive lineman. He finished with 156 tackles (99 solo), with 26 tackles for loss. He had 10 sacks, 31 quarterback hurries, five passes defended, two fumble recoveries and a safety.

Wiltfong helped Norton finish 9-4 and permit 17.9 points per game. The Bluejays had a five-win improvement after 29.8 points per contest allowed last season. Wiltfong has offers from Fort Hays, Missouri Western, Washburn, Concordia (Neb.), Bethel College and Dodge City. Wiltfong told us he wanted to acknowledge his coaches for putting himself in this position especially head coach Lucas Melvin and defensive coach Tony Fiscus as well as all other coaches on staff. He also said it wouldn't be possible to win this award without his teammates/brothers at Norton and that he was proud to be apart of this special TEAM that bought in. Norton finished as the 2A state runner-up this fall.

Uphaus, the defensive leader at linebacker, helped Nemaha Central to an 11-2 mark and 14.6 points allowed a game. Last year, NC was 5-4 and allowed 21.8 points a contest. The Thunder went to a three-front for the first time under ninth-year coach Warren Seitz. Uphaus recorded 133 tackles, according to NC's official statistics, more than 60 ahead of any teammate. He picked off six passes, caused four fumbles and recovered three fumbles, all numbers that finished first or second on the squad. NC forced 36 turnovers, including 28 interceptions. The Thunder faced a run of excellent quarterbacks, such as Maur Hill's Jack Caudle, Riley County's Garrett Harmison, Rossville's Torrey Horak and Norton's Kade Melvin. Last year, Uphaus also led NC with 81 stops for a team that created 20 turnovers, including 14 INTs. It marked the first state football title in school history for Nemaha Central this fall.

Congratulations to Judson Wiltfong on the 2019 2A Sports in Kansas DPOY honor. We witnessed all of your hard work and are excited to see it pay off! DEFINE GYM is a proud supporter of Norton Athletics!

Congrats to Judson Wiltfong for being named the 2019 Sports in Kansas 2A Player of the Year. From Roy's Sales and Service in Norton. Come see us for all your automotive and farm needs, also now serviing automotive besides agricultural equpiment even tires and tire repair!

New Age Industrial would like to congratulate Judson Wiltfong on th 2A Sports in Kansas Player of the Year. Proud to support the Norton Bluejays. Find us online at www.NewAgeIndustrial.com

Congratulations to Norton Community High School Defensive End/Offensive Lineman Judson "Jud" Wiltfong on being named the 2019 Sports in Kansas 2A Player of the Year from Solutions North Bank from Norton. SOlutions North Bank is a proud supporter of all Bluejay Activities. PROUD TO BE A BLUEJAY!

Congratulations to Nemaha Central Thunder Bryce Uphaus on being named 2019 Sports in Kansas 2A Player of the Year from Honeyman Ford in Seneca, KS! Honeyman Ford is a proud supporter of the Thunder!