v Garber, Petz, Saili take home Sports in Kansas 3A POY - Sports in Kansas 
Warning: include(../includes/bodytag.php): failed to open stream: No such file or directory in /home/kansass/public_html/ks/news/index.php on line 36

Garber of Sabetha, Petz of Cheney & Saili of Jefferson West had huge 2019s. 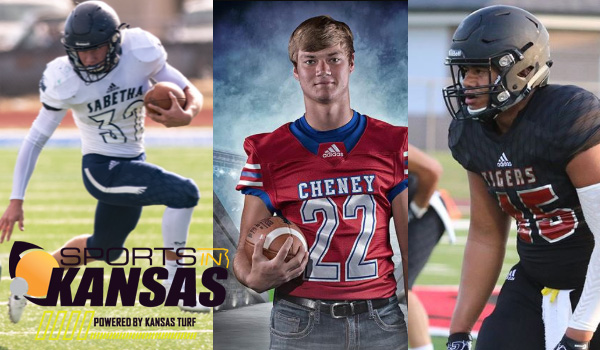 While Andale had the states best team without a major star there were plenty of high quality players across the states most compettive class as this was one of the most competitive races for POY in a class dominated by defense. Petz and Garber tied on votes from a statewide media panel to both take home POY honors. Riley Petz, Cheney's all-around talent that is the swiss-army knife of Kansas high school football, led the Cardinals to a seven-win improvement and a 9-3 season that featured a trip to the 3A state semifinals. It marked the best playoff showing in school history. Cheney lost twice to Andale, the 3A state champion. Petz finished 2 of 3 passing for 89 yards and two scores. He had 39 catches for 989 yards and 15 touchdowns, and 99 carries for 943 yards and 13 scores. Petz also returned a kickoff return for a score, and blocked a kick. In his career, he passed for three touchdowns, caught 17 and rushed for 37. He had 10 interceptions, three pick-sixes.

Petz's all-around play allowed him to earn first team all-conference Flex and first team all-state defense. He is 6-foot-1.5 inches, 168 pounds and the defending state champion in the 300-meter hurdles. He does not have any current offers, though would like to play at the next level.

Sabetha won back-to-back state championships in football, baseball and golf. Gabe Garber earned four crowns in football and baseball and was a standout in both sports. This year, Sabetha went 6-3 and averaged 32.8 points per contest. Garber completed 83 of 124 passes for 1,103 yards with a 9/1 TD/INT ratio. He rushed 137 times for 788 yards and 37 scores, all team-highs. In his career, Garber threw for 2,179 yards and 23 scores, along with 2,626 rushing yards and 62 TDs. Garber picked up his second SIK POY honor as he was named baseball POY back in 2018 as a sophomore. Garber, who was likely the best two-way player in the class when you combine offense and defense, had 384 tackles in his Sabetha career.

Keim Trucking would like to congratulate Gabe Garber of the Sabetha Bluejays on an outstanding career. We are proud of you and the team!

The entire Sabetha community is proud of our Bluejay Football Team and Gabe Garber. It is an honor for Community National Bank to help sponsor such fine young man! Congrats!

Gabe, Watching you these past four years have been so much fun. You couldn't have made us more proud. You play with heart, integrity and respect for others. You have shown class from day one. It's been amazing to see the Sabetha Bluejay football team have much success. WE give God all the glory for you, your coaches and teams success. Congratulations on your high school accomplishments and this POY award! Love, Your Family

2019 Sports in Kansas 3A Defensive Player of the Year: Pene Saili, Jefferson West

Saili, and his brother, Kauli, keyed a Jefferson West defense allowed just 7.3 points per game in an 8-2 season. Jeff West narrowly beat out Andale (7.31 points allowed per contest) for the top 3A scoring defense. Pene, a junior, finished with 118 tackles, 20 for loss, six sacks, four forced fumbles and a pair of fumble recoveries. He delivered two blocked punts and an interception return for a score, one which was key in the win over then top team Marysville. Saili is one of the top juniors in the entire state of Kansas and helped Jefferson West to one of its best seasons in school history. Saili is one of the most versatile players in the state as he can play interior DL, defensive end or either linebacker spot.

Kansas Turf is proud to support the Jefferson West High School Tigers. Congrats to Pene on an outstanding junior season as well as the Tigers on a huge year, we are proud of you!