v Jones, Kremer bring home top Sports in Kansas 5A honors - Sports in Kansas 
Warning: include(../includes/bodytag.php): failed to open stream: No such file or directory in /home/kansass/public_html/ks/news/index.php on line 36 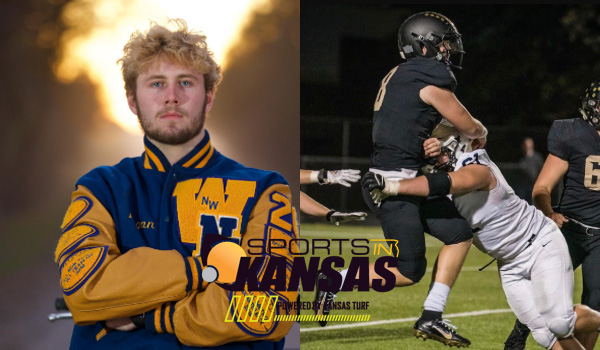 2019 Sports in Kansas 5A Offensive Player of the Year: Reagan Jones, Wichita Northwest

Jones, a second-year transfer from Andover Central and a Missouri Western commit, led Wichita Northwest to its second straight Class 5A runner-up appearance. The 6-foot-1, 185-pounder had 3,411 total yards this season. Jones completed 105 of 172 passes for 1,683 yards with 19 scores against just four interceptions. He rushed for 1,728 yards and 20 TDs and led an offense with more than 500 yards a contest. In the state semifinal 80-42 victory versus Maize, Jones paced the Grizzlies to state records for single game total yards (891) and first downs (43).

Kremer was the defensive linchpin that helped Mill Valley win nine straight contests, finish 10-3 and earn the Class 5A state championship. MV permitted just 17 points per game in the Eastern Kansas League. Coach Joel Applebee said late in the season that he believed the Jaguars were carried by their defense. The defending state wrestling champion at 220 pounds, Kremer finished with 54 tackles, along with a team-high 17.5 for loss. He also led with 11.5 sacks and 11 quarterback hurries. In the 40-31 title win versus Wichita Northwest, Kremer finished with four tackles and 1.5 for loss.

Kremer has played on the offensive line throughout his career, including starting as a freshman. The 6-foot, 250-pound Kremer played guard and defensive tackle. In the last two seasons, he has accumulated 102 stops, 28 for loss, 14.5 sacks and 23 hurries. Kremer is nominated for the Buck Buchanan Award for the top big school lineman in the KC Metro area. (photo credit on feature from Lori Habiger)

Congrats to Mill Valley HS Lineman Ethan Kremer on being named Sports in Kansas 5A Player of the Year from Shawnee Chiropractic Clinic.

Congratulations Ethan Kremer, Sports in Kansas 5A Defensive Player of the Yeaer! We are proud of you! Love, Mom & Dad