v Nex-Tech Wireless Athlete of the Month: Tyson Struber - Sports in Kansas 
Warning: include(../includes/bodytag.php): failed to open stream: No such file or directory in /home/kansass/public_html/ks/news/index.php on line 36

Canton-Galva led by head coach Shelby Hoppes got its first ever state football title in 2019. 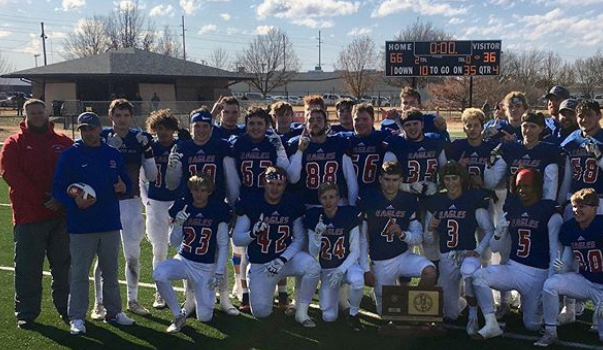 Canton-Galva sophomore wide receiver Tyson Struber relied on his coaches, teammates and several key tenets once the Eagles fell behind 36-0 to St. Francis with 2 minutes, 57 seconds left in the first half in the Eight-Man, Division I state championship.

“We had preached about always staying confident, never having your head down, don't show the other team that you are down,” Struber said. “And just always pull through and give it everything that you have got, and I give all the credit to the coaches for teaching us that.”

Struber eventually had a record-breaking performance that keyed the biggest comeback in Kansas state championship history. He caught a 40-yard pass to set up the Eagles' first score, a one-yard run from senior quarterback Landon Everett. After a SF fumble, Struber had a 26-yard touchdown reception on the game's next play.

Canton-Galva closed the gap to 36-14 at halftime.

In the second half, C-G tallied 52 unanswered points and won 66-36 last Saturday at Newton's Fischer Field. According to Eagles' official statistics, Struber recorded eight catches for 188 yards and three scores. He had the first two TDs of the third quarter on scores of 52 and 26 yards. The game had 10 turnovers, five on both sides. The Eagles had zero second half turnovers.

“We know who our playmakers are,” C-G coach Shelby Hoppes said. “It's my fault. I wasn't doing a good job of getting the ball in their hands, so we made some adjustments like every team does.”

Struber broke the Division I record for receiving yards in a state title game of 186, previously held by Claflin-Central Plains' Layne Bieberle in '14.

The Division II record is 206, set by Quivira Heights' Jacob Ingham in '09. No other Division II player has more than 156 receiving yards in a state finale.

“Coaches told us that we are just as good of a football team as they are,” Struber said. “We are just as physical, just as big. We've just got to play our football and stay confident.”

Additionally, Struber and junior Brandon Huff tied for the team-high with 10 tackles and both recorded an interception. Struber had multiple big catches against St. Francis senior Brady Dinkel, a four-year starter.

“He's such a superior athlete, and makes plays when the ball is in his hands, and we are lucky to have him,” Hoppes said of Struber.

“We definitely took the program on an 180 flip,” Struber said. “I remember going to games, and there’s more visiting fans than the home fans, but now we've got fans on the track, fans showing up an hour early, and I'm definitely glad to be a part.”

Last season, Struber earned first team all-state Kpreps when he had 42 catches for 572 yards and 14 scores and picked off 10 passes. Struber is regarded as eight-man’s best wide receiver. Struber gave “all credit” to his teammates, who included senior standout quarterback Landon Everett. Both Everett and Struber are up for Division I Player of the Year honors on at least one side of the ball.

“If we are down, they will make sure that we are up,” Struber said.

This season, Struber missed four contests because of a hand injury suffered when he went for a fumble recovery in a Goessel victory on Oct 11. He played the state title game with two screws and a small brace. Overall, Struber finished the season with 22 carries for 230 yards and four scores. He caught 35 passes for 864 yards and 17 scores.

Defensively, Struber delivered 60.5 tackles, 4.5 for loss and seven interceptions. Struber also returned a kick return for a score. He then returned for the state quarterfinals. C-G won the first state football championship in school annals.

“Coming back, I was a little bit hesitant on my hand, but it's just a grind,” Struber said.

The 36-point comeback is confirmed as the largest comeback in the 51-year history of KSHSAA state championship annals, according to Kansas playoff historian Brett Marshall and Sports In Kansas research that was completed Thursday night. Marshall compiled “Under the Lights: 50 Years of KSHSAA Football Playoffs,” the book released this summer.

C-G's comeback is the second-largest found in any game, according to research from various media reports.

The state championships have featured multiple big comebacks. Notably, in the 1993 Class 6A contest, Derby led Lawrence, 23-0 at halftime. In the second half, Lawrence scored 27 unanswered points to win 27-23.

The biggest Kansas regular season comeback in recent annals is believed to be 27 points. With 7:10 remaining in the first half, Wichita Northwest led Garden City, 27-0, in Week 6 of the 2016 season. GC won 46-34.

The Lansing State (Mich.) Journal reported in 2017 that the largest comeback in Michigan state history is 32 points.

The biggest comeback discovered in any high school game is Illinois' Naperville vs. Edwardsville on Aug. 26, 2017. Naperville trailed 42-0 and won 53-49. Edwardsville quarterback Kendall Abdur-Rahman rushed for 159 yards and two touchdowns in the first quarter but left the game with cramps. Nick Calcagno tallied 13 catches for 238 yards and three scores.

“All the conditioning that we do during practice, it just gets us for these games where we are down 36-0,” Struber said. “Where we have got to come back – and make history.”