v Looking at the sub-state semifinals across Kansas - Sports in Kansas 
Warning: include(../includes/bodytag.php): failed to open stream: No such file or directory in /home/kansass/public_html/ks/news/index.php on line 36

Looking at the sub-state semifinals across Kansas

Nemaha Central knocked off Humboldt last Friday to advance to the semis. 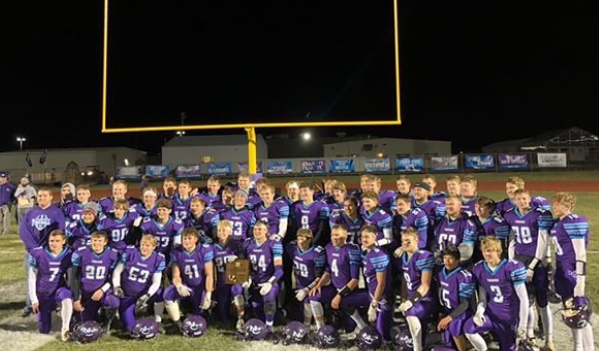 The semifinals feature turnaround stories, a look at potential upsets for No. 1-ranked teams, plenty of rematches, and a high volume of 1,000-yard rushers and standout linemen.

Thanks to the BV Touchdown Club for their annual support of Sports in Kansas.

Blue Valley finished 4-5 in 2018, the first losing season since 2007 for one of the state's most tradition-laden programs. The Tigers have six state titles and seven runner-ups. BV committed 18 turnovers and finished plus-1 in turnover margin. Eric Olson, the team's undisputed leader, had a big start with 36 carries for 261 yards and three rushing scores.

A senior, Olson suffered a season-ending Lisfranc foot injury as Blue Valley tried to run out the clock in a Week 2 win versus Blue Valley North. Alex Totta, a superb football player and wrestler who joined the armed forces, played at 60 percent throughout the year. He battled a bad ankle, concussions and mono.

“The same thing that other people deal with, and we didn't respond well,” coach Allen Terrell said.

Blue Valley's seniors came together in the offseason and set a team motto for 2019: “Restore the Order.”

“This isn't what Blue Valley football is, and they wanted to get back to what we do well,” Terrell said.

Then, senior kicker Colin Wood lost his mother to a long bout with cancer the Monday before Blue Valley started the season versus Eastern Kansas League rival St. Thomas Aquinas.

As a junior, Wood had made 26 extra points, though was 0 of 3 on field goals. Blue Valley asks its kickers to participate in all offseason football activities, and Wood did.

Before she passed away, Wood's mother wrote a note for each of her three children. For Wood, the message read: “Colin, go kick a field goal for me, and make it a long one.”

Terrell said his mother's passing has “kind of been a rallying point” for Blue Valley this year. Wood has responded with an excellent season. He has 24 touchbacks on 46 kickoffs. His 48 kicking points include 36 of 40 on extra points – and 4 of 5 on field goals.

In Week 9, Wood made a 42-yard field goal, the longest of his career, and was six for six on extra points in a 45-14 win versus Shawnee Mission East. The following week, Wood kicked a 41-yarder in a 24-7 victory versus Olathe East, the same team that knocked Blue Valley out of the playoffs in 2018.

Last week, he finished 3 of 3 on extra points, and Blue Valley defeated Blue Valley North, 21-20. BVN had a blocked extra point in the final seconds to seal the Tiger win. Blue Valley has doubled last year's win total to 8-3 and has advanced to the Class 6A state semifinals against Olathe North (9-2).

Wood is one of many Tigers who have enjoyed a big jump. Junior Chase Jans, an elite baseball player, came back to football this fall. He has rushed 145 times for 1,049 yards and 10 scores. Olathe North counters with one of the state's best players in junior running back/quarterback Arland Bruce IV (2,249 rushing, 349 passing, 43 TDs accounted for). BV and Olathe North have split the last eight meetings dating back to 2004. Six have come in November.

Blue Valley's improvement, and the seasons of Jans/Bruce encapsulates several of the key themes of the state semifinals. Thirty-two teams remain in 16 games across eight classifications. Many of the squads feature excellent running backs and defensive lines.

In addition, two other big areas to watch are the multiple rematches and is the performance of the No. 1-ranked teams. All eight No. 1 squads, 6A Derby, 5A Aquinas, 4A Bishop Miege, 3A Andale, 2A Hoisington, 1A Smith Center, 8-Man I Canton-Galva and 8-Man II Osborne, are favored in its matchups. However, No. 1 ranked teams are just 16-8 in semifinal showings the last three years.

Can a team go from a losing record to a state title?

This is an extremely rare feat, though three teams, Blue Valley, 3A Cheney and 2A Norton, have the chance to accomplish it this season.

Notably, Eight-Man, Division I Canton-Galva had a chance for the feat last fall after a 4-5 mark in 2017. However, the Eagles lost to Solomon in the sub-state title game, after C-G beat the Gorillas in district play.

Norton has permitted just 19.3 points per game, down from 29.8 in 2018. Like Blue Valley, Norton has enjoyed improvements at multiple positions, including in the backfield and at defensive line. Senior dual threat quarterback Kade Melvin has 179 carries for 1,118 yards and 18 scores. He has passed for  1,645 yards with a 12/7 TD/INT ratio. Senior Luke Wahlmeier has delivered 166 carries for 1,019 yards and eight rushing TDs.

Norton's big defensive line has featured a huge season from 6-foot-5 senior Judson Wiltfong. He has 123 tackles, 22 for loss and 10 sacks, all Bluejay bests.

“I would say Sterling is one of the top defensive linemen in the state of Kansas,” Terrell said. “He doesn't get as much attention, because of the kid (Richman) that plays on the other side for us, but as a junior, Sterling has taken over games at times. Very dominant, explosive, powerful kid who still has a ceiling that he hasn't reached yet. He is getting a lot of attention from colleges. He is an explosive player.”

Power has recorded 59 tackles, six for loss. That included a season-high 10 tackles versus Olathe East, and nine tackles with a career-best three TFLs last week. Terrell said Power has learned to play with a lower pad level and higher motor, and “necessary amount of nastiness.” Power has combated double and triple teams.

“From the beginning of the year until this point, I don't know that we have someone that has improved more than him,” Terrell said.

It's very likely the semifinals will yield at least one loss for a No. 1-ranked team. At the very least, the margins should be closer than last season.

In the last three years, No. 1 teams entering the semifinals have suffered eight losses. In 2016, 5A Great Bend, 3A Hoisington and Eight-Man, Division I Spearville fell. In 2017, No. 1-ranked teams went just 4-4. Losses came to 5A Goddard, 4A-II Scott City, 3A Phillipsburg and 8-Man I Burlingame.

Last season, Derby, Aquinas, Miege, Andale, Phillipsburg, Smith Center, Central Plains and Hanover were the No. 1 seeds. The seven squads won by an average margin of 35.7 points. The only loss came in 3A when Andale fell to Pratt, 21-19.

This season, Derby (11-0) plays host to Topeka High (10-1), likely the state's best team versus Kansas' best player in Ky Thomas, the second-leading rusher in state history. Topeka is into the semifinals for the first time since 1973. The Panthers have won 24 straight games. Derby again has talent across the board, including a first team defense that has only allowed two touchdowns. Linebacker Jack Hileman, defensive lineman Tyler Dorsey and offensive linemen Kevin Washington and Alex Conn lead the team.

Upset watch level: Cool. Thomas is the seminal player of 2019 with 2,661 rushing yards, though Derby is on another level.

Mill Valley has permitted just 14.5 points per contest, slightly better than the Saints, behind a huge season from junior defensive lineman Ethan Kremer. This is the fifth straight year the teams have matched up in the playoffs. Aquinas won 28-21 in the regular season. Aquinas scored twice in the second quarter to pull away. Mill Valley outgained Aquinas, 389-357, though the Jags were minus-3 in turnover margin.

Upset watch level: Warm. This one is definitely possible, especially if MV can avoid turnovers.

In 4A, Bishop Miege (9-2) is the unquestioned heavy favorite against Paola (11-0). The Panthers have suffered recent injuries at quarterback and running back.

Upset watch level: Cold. Like many great 4A teams of recent vintage, the season ends against Miege.

Upset watch level: Cool. Cheney had trouble running the ball against Andale, though the Cardinals moved the ball passing-wise. Andale did lose in this game last year.

Hoisington senior running back Wyatt Pedigo has his second straight 2,000-yard season with 160 carries for 2,252 yards and 36 scores.

Upset watch level: Cool. Hoisington in the definite favorite, though this one should be much closer than the first meeting.

Casey, despite missing two games, has 134 rushes for 1,209 yards and 20 scores. Senior quarterback Jordan Finnesy has 1,074 rushing and 900 passing with 30 scores accounted for. SC has won 21 straight games. The Redmen have four backs with at least 561 yards, including 163 carries for 1,521 yards and 14 scores from Jaden Atwood. Smith Center has again excellent line play, while senior Joel Montgomery has led the unit with 94 tackles, 13 for loss.

Upset watch level: Warm. Even without Casey, Plainville had the scoring chances in the first meeting. Can the Cardinals move the ball again against SC's airtight defense? Similar to MV/Aquinas, these are two elite teams who see each other a lot.

Upset watch level: Hot. Very likely the closest on-paper matchup of any game featuring a No. 1 team. Madison is also the home team.

In Eight-Man, Division II, Osborne (11-0) gets Hutchinson Central Christian (10-1) at home. Both teams earned crazy, one-score wins versus Thunder Ridge this year, including 64-60 for Central Christian last week. Osborne is without senior running back Darrien Holloway, out with a season-ending injury (team-high 970 rushing yards). Senior Steele Wolters has delivered an all-state season with 27 offensive scores, along with 112 tackles and four interceptions. CC quarterback Caleb Lambert has accounted for 37 offensive scores.

Upset watch level: Cool. Osborne is tradition-laden with seven trips to at least the semifinals since 2010. CC is there for the first time.

The theme of the 2019 state football playoffs is rematches. Along with the rematches listed above, the following games are also rematches:

Eight-Man, Division I: Leoti-Wichita County (10-1) at St. Francis (11-0) – St. Francis won 46-0 in district play. The Indians have allowed just 42 points all season, while Brady Dinkel and Shadyron Blanka have both cleared 1,300 rushing yards. WC is into the state semifinals for the first time in 29 years. WC quarterback Kayde Rietzke is in the strong running for classification player of the year with 1,730 passing, 1,630 rushing and 55 scores accounted for.

While not a rematch this year, Class 5A Maize (10-1) and Wichita Northwest (11-0) was the semifinal matchup last fall. Northwest won, 67-60. The Grizzlies have permitted just 87 points this season. Northwest senior quarterback Reagan Jones is on the short list for 5A Offensive Player of the Year with 1,368 passing, 1,271 rushing and 32 offensive scores. Junior Julius Bolden has 121 carries for 1,234 yards and 24 TDs. Maize senior Caden Cox has 194 carries for 1,363 yards and 18 scores.

There are three rare matchups involving team that are, coincidentally, all ranked second in its respective classes – McPherson, Riley County and Centralia

Class 4A: Andover Central (10-1) at McPherson (11-0) – These teams have only matched three times all-time, according to Kansas Football History. McPherson won twice in 2010 and once in '11. Both teams have a Division I caliber player in McPherson end Cody Stufflebean, and Andover Central wide receiver Xavier Bell, who has gained Division I attention for football and basketball.

Class 1A: Centralia (10-1) at Jackson Heights (9-2) – Each squad has an outstanding back in Centralia's Kamble Haverkamp and Jackson Heights with Cooper Williams. This is the fourth matchup between the teams since '04. Centralia won 41-13 in '05. Centralia and JH split a pair of district games in '16 and '17.