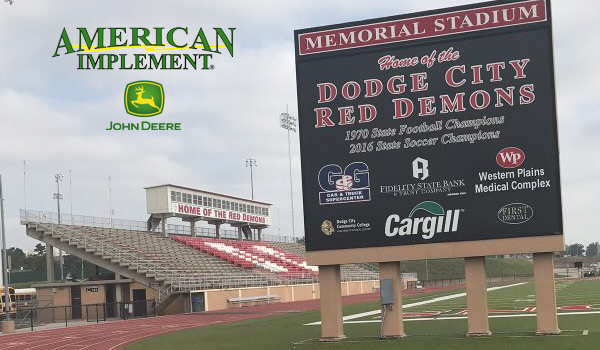 “He’s always been someone that I can look up to, and respect and I love listening to him, and just being coached by him,” Harshberger said. “I couldn’t ask for a better coach.”

Dodge City finished 6-4 last season and has emerged as one of the state’s biggest surprises at 9-0 and Western Athletic Conference champion. Dodge City is seeded second in Class 6A West and just outside of the top-5 in KPreps state rankings.

Top-ranked and defending state champion Derby and DC are the only two undefeated squads in 6A. Last week, Dodge City trailed one-win Haysville Campus for most of the first half before the Red Demons pulled away for a 34-13 win at Memorial Stadium.

This year JC has also had a three-win improvement. DC standout wide receiver/free safety Ethan Alcorn received a preferred walk-on Nov. 4 from Kansas State. Andrew Khoury is second in 6A and sixth in the state with 1,888 passing yards. Qua’Vez Humphreys is third in the state with 855 receiving yards.

“I coached a lot of these kids in youth football, and to see those kids grow up and be big-time players for us, it’s been a special fall,” coach Foster said after last Friday’s win. “Nobody wants this thing to end. Tonight we have to learn from it, or I told them, ‘There will be 48 more minutes of play, and we will be done.’ We have to learn from this, to elevate our play, or life won’t last long in the playoffs, not in 6A.”

DC has a pair of wins by three points and a 10-point victory against rival Garden City in the Hatchet Game. Dodge City has enjoyed its best season since an 11-1 mark in 2010, Foster’s first year with the program. DC won between three and five games every fall from ’11-17.

“I felt it from the start,” Harshberger said of the turnaround. “I just felt the connection with these guys straight from the start, and I knew we were going to do something big.”

The big difference has come defensively. DC switched to a three-front and added sophomore nose guard Santonio Turner, a Liberal transfer. He also served as a blocking back in the Campus win. In ’18, the Red Demons scored 23.8 points per game and permitted 26.8. This year, DC is at 33.3 points a contest and has allowed just 13.8.

The Red Demons stand second behind Derby in 6A in fewest points permitted. Dodge City has allowed just 279 yards a game, best in the conference, according to Hays High broadcaster/WAC statistician Dustin Armbruster this week. Turner has 68 tackles, seven for loss.

“He’s been absolutely incredible,” Harshberger said of Turner. “I couldn’t be happier to have him. I couldn’t ask for more.”

“When you see him running at you, I would run out of the way,” junior Alden Knedler added. “He’s just a bulldozer.”

Dodge City has played at least the last three games without two of its captains: all-purpose threat John Johnson and defensive end Jashon Taylor, the team’s leading tackler in ’18.

However, DC had a goal line stand on the first possession versus Campus and Harshberger also recovered a fumble in the red zone that eventually led to a Red Demon touchdown.

“We have enough depth just to have guys step up, but they are a huge part of our team, and we are waiting for them to come back,” Knedler said.

Unlike many 5A/6A schools, Dodge City often has its key players go both ways. Knedler and Foster each tallied at least 148 rushing yards versus Campus. Knedler had a huge 42-yard touchdown run late in the first half when he broke several tackles and bowled over a player.

“Coach Foster always says, ‘Don’t let them take you down,’” Knedler said. “If they are not going to dive through your legs, you are not going down,’ and I just put that in my head.”

Harshberger has eight tackles for loss and recovered three fumbles.