v Nex-Tech Wireless Athlete of the Month: Addison Crites - Sports in Kansas 
Warning: include(../includes/bodytag.php): failed to open stream: No such file or directory in /home/kansass/public_html/ks/news/index.php on line 36

Crites helped lead the Oilers to the 1A state title on Saturday in Dodge City. (courtesy of USD 112) 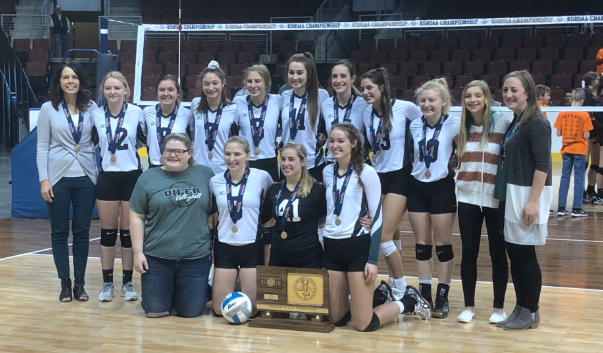 The 5-foot-11 Crites delivered an incredible 19 kills and 27 digs in the victory. Additionally, Crites led her team throughout the match. She supported, cajoled and gathered the Oilers together multiple times.

Central Plains saved three match points in the third set and won the match’s final five points. Crites, in the back row, delivered a pair of digs when CP trailed 24-23 in the third.

“One point away,” she said. “We just knew we couldn’t be timid in those moments or else we definitely would have lost.”

Overall, CP had 80 digs and six blocks – 2.5 from Crites. Rural Vista easily had its lowest kill rate of the season at 28.1 percent. The 42-5 Heat also delivered its lowest hitting percentage of the year at .167.

Crites’ success continued Central Plains’ and her family’s sports legacy and was a byproduct of several improvements during the fall. Addison played back row for the first time and had to grow into being a leader.

“I just had to trust myself to know that I was experienced enough with the game in order to make the plays,” Addison said of the back row. “I just have gotten some really good advice. My teammates always reminded me to stay wide, because I struggle sometimes going behind the block, and then they trust me. And then I know if I get low and just do what I am supposed to do I can put it in the right place.”

Her individual numbers in the state championship were unmatched by any of the elite players in Kansas this fall, especially for a middle blocker. St. James Academy’s Ellie Bolton is a Creighton signee and considered the state’s top libero. Her season high was 25 digs.

Hesston’s 5-foot-10 Elise Kaiser is considered one of the state’s most versatile players. Her career highs are 17 kills and 24 digs, though neither came in the same match.

Colgan’s Millie Stockard is on the short list for 2A Player of the Year and has recorded more than 1,200 career kills, 1,000 assists and 500 digs. In a state match versus Valley Heights, Stockard recorded 18 kills, 15 assists and 20 digs, though the Panthers lost in three sets.

Addison’s mother, fourth-year coach Lisa Crites, was an assistant on the other CP title squad, the 2015 team that finished undefeated in Class 2A.

“She has definitely grown into it,” coach Crites said. “Her intensity was a little much in the beginning of the season, and she had to learn her teammates, and how to help lead on the floor as a senior.”

Central Plains, the No. 7 seed, was not ranked in the top-10 of the final Class 1A coaches’ poll. The Oilers finished 34-11. Including a regional bye, Central Plains were 10-0 in the postseason.

“We just came to play, and that’s all I can say,” junior Lexi Oeser said. “We just came and got it done. It was nice.”

From ’11-19, ten Kansas volleyball state title squads had double-digit losses. Three are Bishop Miege and four belonged to Topeka Hayden, both generally Class 4A teams that play bigger schools in their conferences.

It’s much rarer at the smaller school levels. Axtell finished 27-15 to win the Class 1A, Division II title in ’16, and 2A Garden Plain went 35-10 last fall. However, Central Plains’ strength of schedule significantly helped the Oilers.

“We played Nickerson, very early in the season, who is amazing,” Addison said. “And we played also other very talented teams like Smoky Valley, and they just really tested us with their height and their athleticism and how they move the ball. … It just helps us out when we get to teams like Rural Vista who’s also very athletic to learn how to finish.”

In ’16, Crites took over as head coach for Kim Rolfs, currently at nearby Little River. That fall, Crites had her daughters on the roster, senior Cassidy and then-freshman Addison. CP earned state runner-up. The Oilers didn’t qualify for state the past two years, though finished 26-11 in ’18.

“It was really special,” Addison said of playing for her mom. “We definitely have had some tough moments, mother-daughter wise with the whole coaching thing my four years throughout high school, but overall, she’s been great and she has been very supportive and helpful to me. She’s just my mom, so I love her.”

Coach Crites’ three oldest children have all enjoyed great sports success – and been a part of at least one state record. Braedan served as Central Plains’ starting quarterback for three years and was on the roster at Hutchinson Community College. In his career, he threw for 5,364 yards and 100 scores.

In 2014, he and wide receiver Layne Bieberle led the Oilers to a 42-30 victory versus Hanover in the Eight-Man, Division I state championship game. Crites passed for 260 yards, then an eight-man state title game mark.

It currently ranks second all-time according to “Under the Lights,” the 50-year history of the KSHSAA football playoffs that was released this summer. Bieberle, who has enjoyed a standout collegiate career at Fort Hays, still holds the Eight-Man, Division I state title game record with 186 receiving yards.

Cassidy and Addison have both been a part of the current Central Plains’ girls basketball winning streak that has stretched 111 wins and six state titles. Both are Kansas state records.

Addison injured her knee as a sophomore in basketball, though was a key player last winter.

“I just knew how awful it felt to miss out at the end of the season,” she said. “And I just remembered to not take it for granted, and that it could end anytime unexpectedly, so just had to play every game like it’s my last.”

Cassidy was an honorable mention setter/right side hitter for Hutchinson Community College in 2018.

She has come back for several of Addison’s sporting events. That included Saturday, when she embraced her mother outside of the locker room. Ten-year-old Brodie is the youngest of the four.

The three oldest children all share the @Zebra_Cakes twitter handle, an idea that Braedan and his good friend Reagan Phelan thought of many years ago. Phelan has started all but one career game at Washburn, has tallied more than 1,000 career points and is a senior this fall.

“Their success just made me want to be successful, too,” Addison said. “…I just had to work hard, and I get jealous easy, too, so I guess I wanted to be better than they did, too.”

“Rachel was kind of our team vocal leader on the court, and she tried to refocus people if we kind of went off the path, and made sure that we were communicating a lot,” coach Crites said.

Opposite Rebecca Stratmann was the team’s third senior and came back from a knee injury last year. Additionally, sophomore setter Riley Thompson, junior defensive specialist Callie Zink and junior opposite Shaylah Kempke were key, too.

In the 25-17, 25-12 semifinal victory versus Minneola, Crites finished with nine kills, while Nixon finished with six and Kempke five. Lamatsch delivered 16 digs.

In the final, Addison gathered her team together in a huddle at multiple times, including 22 all in the first set. In the second, CP fell down 7-3, and Crites exhorted her team. Rural Vista took a 22-19 lead in the second, and the Oilers elected to run virtually the entire offense through Crites.

She finished the set with three kills, including one point where the Heat dug her four previous times.

Crites again brought her squad together early in the third set. This again occurred when the Oilers had a 10-9 lead and the officials paused the match for a conference. The set had 12 ties between four and 19 points.

“When something goes bad, we kind of struggled at the beginning of the season getting going mental,” Addison said. “And so we just had to remind each other that we can’t do everything perfect all the time and that we all make mistakes. So as long as we stay together, it’s usually when it turns out pretty good.”

Notably, the team supported Nixon, who had three attack errors early in the third. Nixon came back with two late kills and served out the last stretch. Crites had the Oilers’ dig to set up the final kill from Oeser. In the postgame celebration, Crites gave Nixon a big hug.

“She struggled sometimes, and you just have to pull her aside and tell her, you’ve got it,” Oeser said. “Smile, we crack jokes to each other, get her going again, and she served it. She is so athletic.”