v Sports in Kansas: 2019 State Cross Country Preview - Sports in Kansas 
Warning: include(../includes/bodytag.php): failed to open stream: No such file or directory in /home/kansass/public_html/ks/news/index.php on line 36 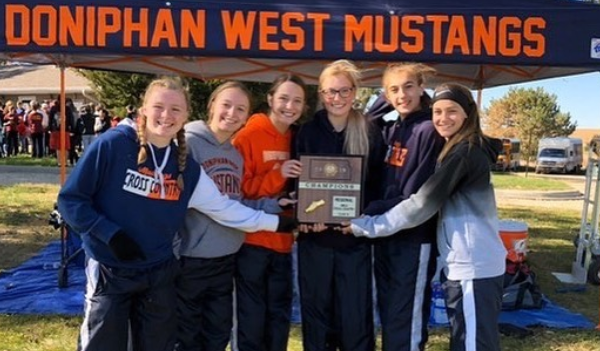 In 2018, the Norton girls’ cross country squad finished fourth at the regional meet, one point away from the third and final state qualifying spot. Scott City, TMP-Marian and Clay Center finished ahead of the Bluejays. The trio then occupied the top-three team placings at the state meet.

Norton junior Lexi Kats captured the Class 3A individual title in 19 minutes, 26.6 seconds. Sophomore Hannah Bailey earned 29th in 21:38.5. Kats has never won a league or regional meet. Last year, Kats came up to Rossi after regionals and said she could win state. She has an excellent kick and started to pull away in the final 200 yards.

“I have coached a lot of years in a lot of sports, and I think she is probably one of the toughest kids and one of the best competitors that I have ever had,” coach George Rossi, in his 32nd  year with Norton athletics, said.

In late June, Norton took its every other year trip to Breckenridge, Colo., and ran in the mountains. Rossi, a Colorado native, brings his returning varsity runners. The trek helped get the Bluejays in shape and featured some team bonding. Norton discussed its season goals on the trip and spoke often of the close team regional finish.

“Really understand what it’s like to have that heartbreak and really didn’t want to go through that again,” Rossi said.

This fall, Norton posted a strong start at Wamego, one of the larger early regular season meets. The showing gave Norton confidence, and that built at the annual Rim Rock meet in Lawrence on Sept 23. The massive regional competition features several races and teams from multiple states.

Norton has run at Rim Rock in the regular season since 2011. The girls finished sixth one year and the boys have never been in the top-10. This season, the Bluejay girls earned runner-up in the Blue race. Kats earned ninth, and Bailey 19th.

Norton was third in the Blue race behind Girard and Clay Center. Seniors Connor Hall and Ricky Hall earned sixth and seventh. Norton finished sixth in 3A boys in ’18 with King ninth and Hall 14th.

“We were not expecting that at all,” Rossi said. “I think that gave us a big shot in the arm.”

Last week, Norton hosted regionals for the first time in Rossi’s 11 years with the program. Rossi called the regional meet “loaded,” notably with Southeast of Saline.

Norton girls, though, captured the title with 44 points, 13 ahead of Southeast of Saline. Beloit took the third team spot at 83 points. Norton, which typically runs fewer miles than most teams, has enjoyed strong team chemistry.

“I didn’t have any really high expectations of getting a girls’ team back to state,” Rossi said. “It’s been a couple years since we have went, and it’s been close. Last year hurt a lot just being fourth by one point. Sometimes you would just rather get (smoked), but that one-point loss really sat hard, especially with the older kids, and the kids that we had returning really took that to heart.”

In previous years, Norton has had more injuries when it’s had high mileage workouts.  The Bluejays rarely exceeds six or seven miles in a practice. Norton usually focuses on interval and hill work.

“They have accepted whatever workouts we put in front of them and then just go out and do it, and I think that’s just been the biggest thing that’s helped us this year,” Rossi said. “Their work ethic this year is a lot better than we have had in the past.”

Rossi said Douglas has taken cross country “a lot more seriously,” in ’19, and her tumbling times have been “a shock for us.”

“The work that she’s put in, I think she kind of sees that as paying off, and I think that’s motivating,” Rossi said.

“They’ve been really serious about their workouts this year,” Rossi said. “And I think our workouts this year are better than we have had in quite a few years with everybody on the team, even the JV kids are working really hard, and I think that’s been a big boost for us.”

The boys’ team also qualified for state with a second-place regional finish. Southeast of Saline tallied 32 points, and Norton was second with 107. In the final 3A poll, Silver Lake, SES of Norton lead the way. The Trojan boys are the defending state champions and feature Sprecker and Luke Gleason.

Sophomore Dylan Sprecker captured the regional title in 16:43.55. Hall took runner-up in 16:47.66. King was tenth in 17:29.32. Sophomores Kolton Field and Matthew Willour, freshmen Rylan Wildeman and Garrett Urban, and junior Riley Goss round out the team.

“It’s a tremendous benefit to us to have two seniors,” Rossi said.

Mill Valley is the favorite in both 6A girls’ and boys’ polls. On the girls’ side, Olathe North is ranked second, and Blue Valley West third. For the boys, Lawrence Free State and Washburn are second and third, respectively. The defending state champions are Olathe North for the boys, and Mill Valley for the girls.

Mill Valley’s Morgan Koca won the regional. Katie Schwartzkopf is the defending state titlist and earned regional runner-up. MV returns six of the team’s top-38. Senior Darius Hightower earned the regional championship for Mill Valley. Manhattan’s Daniel Harkin is a state favorite, along with the Indians’ Ella Rosenkranz and Jenna Keeley on the girls’ side.

Buhler leads both polls in Class 4A. Eudora and Baldwin girls are second and third, and Wamego and Circle are second and third for the boys. Buhler is the defending boys’ champion, and Baldwin won the girls. Chapman’s Taylor Briggs has earned back-to-back Class 4A individual titles. She won the Buhler regional over Buhler’s Emma Willison. Eudora’s Riley Hiebert captured a title at Rim Rock and was second at regionals behind KC Piper’s Grace Hanson. Buhler’s Tanner Lindahl is the defending boys’ state titlist and clinched a regional crown.

Girard’s Cormick Logue was the runner-up at Rim Rock and won regionals. He is the brother of Girard’s Cailie Logue, who won 13 state titles in cross country and track for the Trojans and has enjoyed an impressive career at Iowa State.

Class 3A (see feature story at the top)

In the final poll, Doniphan West, Berean Academy and Pretty Prairie headline the girls’ side. St. John-Hudson, Axtell and Beloit/St. John’s are atop the boys’ poll. Both 1A fields, especially the girls, are wide open. Lincoln is the defending girls’ champion, and Wallace County won the boys.

Lincoln’s Jaycee Vath and Aubry Donley finished 1-2 last season. Vath returns as the favorite, and Donley is now running at Friends. Berean Academy is the defending state runner-up, and Doniphan West did not qualify as a team last year. For the boys, Axtell’s Quinn Buessing continues his remarkable four-sport career.

One of eight-man’s all-time best quarterbacks, Buessing took fourth at state cross country in ’18. Hutchinson Central Christian’s Collin Oswalt is back as the favorite after a regional title and state crown last fall. However, Beloit/St. John’s’ Caleb Eilert won Blue race at Rim Rock by .6 seconds over Girard’s Logue. Eilert was second to Oswalt last year.